The spring of 2019 was one of the wettest planting seasons ever recorded for farmers across the Midwestern United States. With fields pummelled by rain and tractors mired in muck, analysts predicted the year’s corn harvest would
be dismal, and prices for corn futures shot through the roof.

If you were in the business of growing or trading corn at the time, you probably weren’t eager to sell your product — unless you were listening to Ryan Truchelut.

Truchelut is president of Tallahassee-based startup WeatherTiger. In 2019, he had just begun field-testing a new agricultural yield model with a select group of customers. His model, which used hyperlocal weather data to predict corn and soybean yields down to the county level, suggested the common wisdom was wrong and that the 2019 harvest would exceed expectations.

“We were able to take that insight to our clients and tell them to take the favorable price while they could,” Truchelut said. “When the USDA report hit mid-August, it was very close to what we’d predicted. The market dropped 12 percent in a matter of days.”

Twelve percent is a lot of beans if you are a commodities trader. In fact, corn and soybeans, the two largest agricultural commodities in the United States, support a combined $15 billion industry, and the movement of all that money hinges largely on one thing: the weather.

“There is a lot of speculative activity around these commodities,” Truchelut said. “They can be very volatile markets and can rip your head off if you don’t know what you’re doing.”

It turns out there are a lot of people  — not just farmers and traders — who will pay to avoid having their heads ripped off. In fact, business is booming for Truchelut and a growing army of mercenary weathermen like him.

Weather intelligence is a $7 billion industry in the United States, and it is expected to quintuple in size in coming years, according to a 2017 report by the National Weather Service. Tallahassee is well-positioned to capitalize on this growth, and a number of related startups have already put down roots in the capital city.

Lightning in a Bottle

For decades, the weather industry was dominated by just three big players: AccuWeather, DTN and The Weather Company — the organization that, until recently, controlled cable television staple The Weather Channel. This comfortable oligopoly has been challenged in recent years, with insurgent brands angling for their share of a growing market.

This meteorological melee is the result of two primary forces. First, the impending climate crisis and its advance guard of devastating cyclones, wildfires and heatwaves has buoyed demand for products and services that can mitigate weather-related risks.

Second, a range of technological advances — in drones, satellites, sensors, artificial intelligence and cloud computing — have made it easier than ever to collect weather data and transform it into increasingly accurate, specific and actionable business insights.

This combustive blend of surging demand and tech innovation has led to an explosion of startups, mergers and acquisitions. Tracxn, a financial research firm, has sunk more than half a billion dollars worth of investment in weather-related ventures in recent years.

Meanwhile, existing businesses are scrambling to consolidate market share. IBM dropped $2 billion to purchase The Weather Company’s non-cable assets in 2016. That deal was followed by the 2017 acquisition of DTN for $900 million and their subsequent merger with Europe’s Meteogroup in 2019. 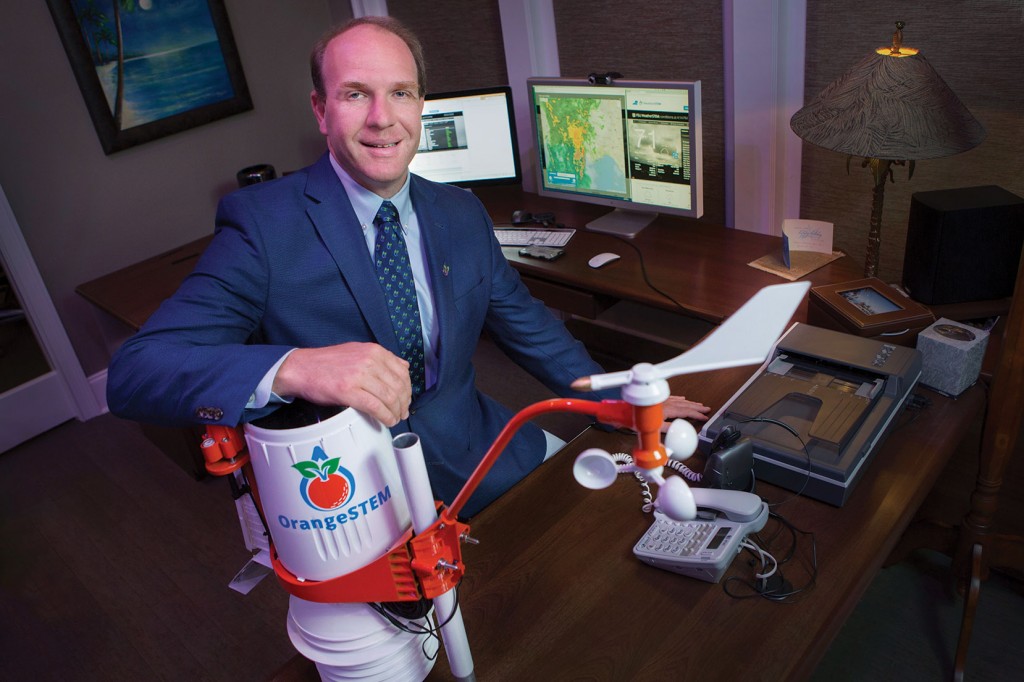 FSU graduate Ed Mansouri founded WeatherSTEM, which deals in weather systems and software that can dictate decisions about how events are conducted. Photo by Bruce Palmer

All this activity bodes well for Tallahassee, which is somewhat of a hub for weather- and risk-related concerns. Florida State University’s departments of Risk Management and Earth, Ocean and Atmospheric Science are among the best in their fields.

Florida also has one of the largest insurance markets in the country — thanks to its expansive, hurricane-prone coastline — and the regulators who govern that market are based in Tallahassee.

“Tallahassee is a really good place to have this kind of business,” Truchelut said, “because it’s one of the few places in the world that is producing people with the kind of training you need to grow a business related to the weather.”

Truchelut should know. He obtained his doctorate in meteorology from FSU in 2015, the same year he and CEO Erica Staehling started WeatherTiger. Staehling, who is married to Truchelut, obtained her undergraduate degree from FSU before receiving a Ph.D. in oceanic and atmospheric sciences from Princeton.

Truchelut and Staehling aren’t the only FSU grads building weather-related businesses. Mark Powell, who received a Ph.D. in meteorology from FSU in 1988, sold his startup, HWind, in 2015 — fewer than 24 months after starting the company.

Powell had developed a way of mapping the maximum winds a hurricane created at any location, in near-real-time. These wind-field maps could be compared with those created by a risk modeling company to validate their assumptions or used by catastrophe bond issuers to determine payouts immediately after a storm had passed.

HWind was ultimately acquired by its very first customer — a global behemoth called Risk Management Solutions — though Powell, who stayed on as RMS’ vice president of model development, is quick to point out that his company wasn’t an overnight success.

“I had the benefit of more than 20 years of research and becoming kind of the leading expert in this area,” he said.

Powell perfected his mapping technology while working at the National Oceanic and Atmospheric Administration and then worked with the agency’s office of technology transfer to move his innovations into the private sector.

While Powell’s entrepreneurial path took him out of government, a third local, weather-related startup is focused on getting their technology into regulators’ hands.

WeatherSTEM, founded by FSU grad Ed Mansouri, sells weather stations and decision support software to clients in government, athletics, agriculture and other industries. One of their weather stations sits atop the Las Vegas Raiders’ brand-new, $2 billion stadium in Nevada. The wind speed measurements from that device control when the stadium’s enormous retractable ceiling is closed.

While projects like the one in Nevada attract the most press, WeatherSTEM’s largest client is actually Florida’s Division of Emergency Management. Lawmakers are paying the company close to $1 million each year to deploy weather stations to remote areas throughout the state.

The stations are wind-tested up to 185 mph, powered via solar panels and equipped with cellular transmitters that beam detailed atmospheric measurements into space every 800 milliseconds.

“We’re trying to provide a situational awareness system that helps our emergency responders with critical decision-making before, during and after a storm,” Mansouri said. WeatherSTEM is in its second year of working with Florida, and Mansouri has his sights set on expansion.

“We think the system we’ve created is unique,” he said. “We’re looking to do a very good job here in Florida, so we can use that as a model to monetize in other places.”

Mansouri said he saw plenty of other industries that could benefit from WeatherSTEM’s services, as well.

“One of our opportunities has also been one of our challenges,” he said. “We’ve found a number of different industries that have uses for our technology, but, from a business point of view, what is our focus?”

Truchelut echoed that sentiment, noting that there were plenty of “blue ocean” opportunities in the weather intelligence sector.

“Every business has a logistical challenge where the weather is going to impact their operations in some way,” he said. “For an increasing number of businesses, it makes sense to work one on one with a meteorologist to determine what their stress points are and how to mitigate them.” λ

After 70 Years, The Sponge Grounds Off the Forgotten Coast Are Reopened for Harvesting