A wetsuit-clad Mark Zaslavsky clambers over the rim of one of four indoor galvanized steel tanks and into waist-high water, home to several of his prized Beluga sturgeon — magnificent long-nosed, dark-colored fish that measure about five feet long and weigh a couple of hundred pounds apiece. The sturgeon, part of 13 separate shipments of juvenile fish that Zaslavsky personally escorted from Europe via commercial flights in 2003, now serve as broodstock for his large-scale aquaculture operation in Jackson County.

Like any proud papa, the bearded, grizzled 59-year-old Zaslavsky wants to show off the sheer size and beauty of what could well be considered surrogate children. After numerous splashy tussles that end up empty-handed, he’s finally able — with help from Sturgeon AquaFarms (SAF) Manager Slava Ivlev — to lift one of the giant fish above water briefly.

Impressive as the Belugas are in terms of their size, appearance and rarity, however, they are but one of several Caspian species that SAF raises on its 120-acre fish farm just outside Bascom, a rural hamlet northeast of Marianna.  Others of the smaller sturgeon species spawned and raised at the two-year-old facility are Sevruga, Osetra and Sterlet, the latter once renowned for caviar that was reserved for the palates of royalty. It is Zaslavsky’s ambition one day soon to produce and market Caspian sturgeon meat and caviar commercially, as well as help replenish the species in his native land.

“We’re going to send fertilized eggs back to Russia for free to help the recovery of sturgeon in the Caspian Sea,” Zaslavsky says.

No pipedream this. Zaslavsky, president of the Miami-based Marky’s Caviar, a leading importer/distributor of gourmet foods, has proven the viability of the dream he began pursuing about 2001. The Bascom fish farm currently holds more than 100,000 sturgeon in sizes ranging from fingerlings to adults, including the only farm-raised Belugas in the United States and possibly the Western Hemisphere.

“Of the 26 species of sturgeon worldwide, the most valuable and desirable for caviar are Beluga, Sevruga, Osetra and Sterlet,” Zaslavsky says. “We grow all four species here.”

The point, he emphasizes, is that SAF is the only and largest aquaculture operation in the world producing Belugas, the roe or eggs of which are considered among connoisseurs the “Cadillac of caviars,” a briny delicacy that today fetches an average price of $7,000 per kilogram (2.2 pounds). Other aquaculture operations may raise other types of sturgeon, Zaslavsky says, but SAF is unique in having successfully spawned and raised Belugas in this country.

“There are more Belugas here than in the Caspian Sea,” Zaslavsky asserts, referring to the depletion of the species in its native waters because of overfishing, poaching, pollution and habitat loss.

It’s reported that the Beluga sturgeon population has declined by more than 90 percent in recent decades and is near extinction. Listed as a critically-endangered species, the U.S. Fish and Wildlife Service in 2005 banned the importation of Beluga caviar originating in the Caspian and Black seas. The significance of the ban is that the Caspian Sea accounts for 90 percent of the world’s caviar production, 60 percent of which is consumed in the United States. Many of the countries bordering the Caspian Sea currently have restrictions on the fishing of sturgeon. And it’s expected that at its 33rd annual convention this November, the Commission On Caspian Aquatic Bioresources (made up of Russia, Turkmenistan, Kazakhstan, Azerbaijan and Iran) will ratify a formal agreement imposing a five-year moratorium on the fishing of Caspian Sea sturgeon.

All of which is to say that the world supply of caviar has been curtailed, with the result that demand has driven up prices, made its illegal trade exceedingly lucrative and fostered the farm raising of the prehistoric creatures, which can attain lengths of nearly 19 feet and live to 100 years or more in the wild.

“They have no predators other than man,” Zaslavsky remarks.

Once SAF begins producing sturgeon meat and caviar, Zaslavsky maintains that it will have a virtual monopoly on the coveted commodity, at least domestically. SAF, however, plans to market its products also in Europe, as well as in Russia and the Ukraine, where Marky’s is licensed to sell. Ultimately, SAF’s business plan projects annual sales of 160 tons of smoked, cured and fresh sturgeon meat and 10 to 20 tons of caviar when full production is achieved. 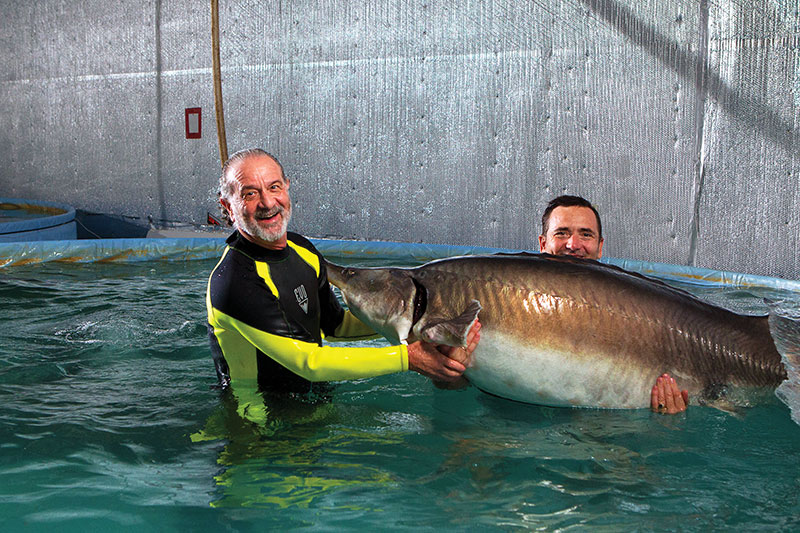 Mark Zaslavsky (left) and Slava Ivler (right) hold up one of the heftier sturgeons living on a 120-acre fish farm outside Bascom.
Scott Holstein

Why North Florida for the fish farm, given his residence and business are in Miami?

“The clean water, nice soil and beautiful trees,” Zaslavsky readily says, as if the answer were self-evident. He gestures toward a row of tall trees near the facility’s entrance, across from which stretch green cotton fields and quiet countryside, a stark contrast to Miami’s hustle and bustle.

“Look at those beautiful trees,” he repeats.

It turns out, however, that the reasons for the site selection were other than mere pastoral beauty. First and foremost, Florida is unique among states in that it allows the farm raising of nonnative fish, with Hawaii possibly the other exception.

Explains Mark Berrigan, bureau chief of the Division of Aquaculture with the Florida Department of Agriculture: “We’re pretty different from other states in that our aquaculture industry is based on nonnative fish. Exotic fish are a mainstay of aquaculture in Florida. Because of this, we’re more tolerant to nonnative fish. We’ve also developed best management practices for these fish.”

As for the choice of Jackson County, it was as far north as the operation could locate without actually going into Georgia.

“This is the North Pole of Florida,” quips Ivlev, the fish farm manager. The geography goes to the other critical consideration: the pristine water quality and cooler temperature of the Floridan aquifer. Sturgeons ideally thrive in temperate waters, which explains why SAF’s original fish farm in Daytona wasn’t very successful. In warmer waters, Zaslavsky says, the fish tend to cease eating, become susceptible to diseases and may ultimately die.

As in any aquaculture operation, the farm raising of sturgeon entails animal husbandry and the management of the environment to create optimum conditions for the health, growth and reproduction of the fish, all with the aim of maximizing yields, even to the point of simulating winter to induce egg creation.

“You lower the water temperature with the chillers and make it dark (in the indoors tanks) so the fish feel that it’s winter,” Zaslavsky explains. “Two months later, you warm the water and put the lights on and the fish spawn. We’re trying to mimic nature.”

Freshwater fish that live part of their lives in brackish waters, sturgeon in the wild can take up to 18 years to sexually mature and spawn only once every two to four years. But in captivity, under optimum conditions and year-round feeding, the fish grow rapidly and mature in less than half the time.

Zaslavsky likes to say SAF embodies the full circle of life. The process starts with the harmless extraction of eggs and sperm from the fish for in-vitro fertilization. The fertilized eggs are then incubated in plastic cylinders until the larvae develop and begin feeding, at which point the fry are transferred to nursery tanks. Once the fingerlings reach juvenile size, they are transferred to larger tanks.