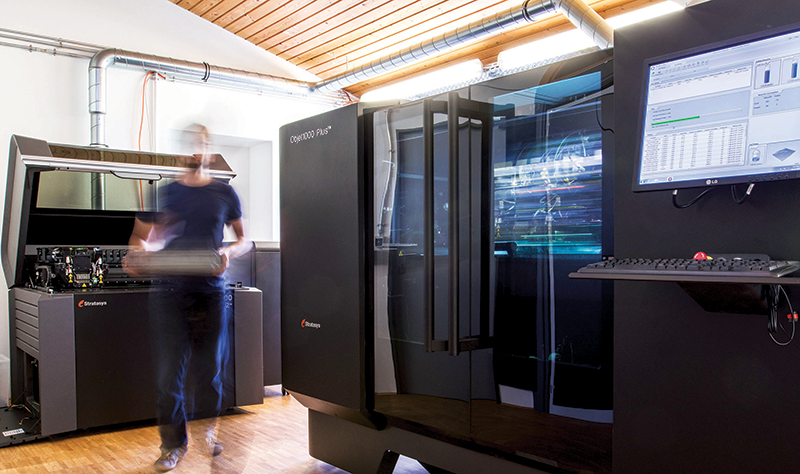 Manufacturing output in the United States has steadily increased since the end of World War II, but manufacturing jobs peaked around 1975 and have been declining ever since. This means that U.S. manufacturers have become very efficient, making more things with fewer people. But as we lose jobs to faraway places, a big question arises: What are Americans to do for work? 3D printing may be a big part of the answer to that question. It is already creating jobs, many of which are small businesses.

Because 3D printers can make entire parts or products with fewer machines, fewer steps and, therefore, fewer people, they can eliminate the benefits of making things where labor is cheap. The implications are obvious: More manufacturing in America but not many jobs running the machines. Ten manufacturing jobs lost in low-wage countries may create only one job in a 3D printing-based economy, but let’s be careful to compare apples to apples. If it takes 10 people to operate the traditional machines needed to make a single part, it may take only one person to operate the 3D printer that makes that part in America. To the optimist, that is one more manufacturing job than we had without 3D printing. To the pessimist, we still need nine more jobs. But the pessimist is missing an important point: If the part is made in America by a local worker operating the 3D printer, most of the supply, support and distribution chain will be here too. This creates opportunities for both big and small companies.

Because chasing cheap labor is unnecessary in a 3D-printed world, this technology can break the grip of centralized manufacturing because it democratizes manufacturing. But don’t assume that huge factories will simply replace their traditional machines with 3D printers. As 3D printers become more and more capable of making almost any finished product, centralized mass production may no longer be needed and, as a business model, may become as antiquated as the dinosaur. 3D printing will pull manufacturing away from the manufacturing hubs and redistribute it, product by product, among thousands or tens of thousands of smaller factories across the globe. Many parts and products will be made regionally, close to where they will be used, by small, independent service bureaus. I call them independent fabricators. They are usually small businesses that 3D-print parts for customers as a service. Because 3D printing substantially reduces the labor costs of manufacturing, these fabricators can offer manufacturing services close to the point of need. All of the services in the supply and distribution chain follow these regional fabricators.

End of the Line

The days of thousands of unskilled American factory workers performing highly repetitive, mindless tasks along an assembly line are gone for good. The factory of the future will be inhabited mostly by 3D printers, robots and other advanced machines, all driven by software. Some people will be needed on the factory floor to make sure everything is humming along, but the jobs they will do may not exist today.

As technology advances, there will be little place on the factory floor for unskilled workers. In fact, even today there are fewer and fewer jobs for workers without skills or a college education. Between October 2008, when the world economic crisis began, and mid-2014, the U.S. unemployment rate hovered in the 6 percent to 10 percent range. During that same time period, the unemployment rate for college-educated workers was only about 3 percent to 5 percent.

In a 3D-printed world, the demand for skilled workers will increase, but we don’t know yet exactly what their jobs will be like. People will be needed at every step of the now-localized supply and distribution chain, even though their jobs will be radically different from what they are today.

Think About the Horse

So if 3D printing factories will not employ many people and most of the jobs will be for skilled workers, how will 3D printing spark a new industrial revolution, launch a manufacturing renaissance, bring jobs home and spark the creation of new small businesses? Think about the horse. When the horse was the main form of transportation, there were many horse-related jobs: saddle makers, blacksmiths, wagon makers, stable owners, feed suppliers, etc. When the automobile came along, most of those jobs were lost. But think of how many new businesses and new jobs were created by the invention of the automobile. 3D printing has the same potential.

3D printing will spawn businesses, products, services and jobs that are as unimaginable today as the auto industry was at the dawn of the 20th century. There are already hundreds of independent 3D printing fabricators in the United States, most of which are small businesses. They are the 3D printing factories of the future.

There are two sides to the 3D printing industry: industrial and consumer. The consumer side is almost entirely small businesses.

Of course, my crystal ball is not perfect, but some types of 3D printing-related jobs are suggested by its strengths.

As more and more 3D printers are sold, they will probably be networked. 3D printer networks such as 3DHubs, which connects users to thousands of consumer-grade 3D printers around the world, are already springing up. Many of the printer owners are one-person fabricator shops.

3D-printable digital blueprints are a company’s crown jewels. If they lose control of them, their businesses could be destroyed. Several start-ups have their sights set on this problem.

Computer programmers in the 3D printing job market will be like kids in a candy shop. They and their businesses will be in high demand to write, update and manage software to meet 3D printing-related software needs for customization, design, manufacturing, quality control and many other needs yet to be discovered.

Another small-business growth area will be 3D-printing product designers. Before 3D printing, products were designed so that they could be made with traditional manufacturing methods, which is called “design for manufacturing.” 3D printing eliminates such limitations and enables manufacturing for design. This allows designers to create products that never existed before and to give existing products a radically different look and feel. 3D-printed designs can be complex, customized and one-of-a-kind. Designers who take full advantage of 3D printing will design parts and products that look radically different from their traditionally made counterparts and designs that could not be made before. Yet companies that use 3D printing chronically complain of the dearth of designers who understand 3D printing. The 3D printing world is a product-design company’s oyster.

Skilled 3D printing-related jobs soared 1,384 percent from 2010 to 2014 and were up 103 percent from 2013 to 2014. The three jobs most in demand were industrial and mechanical engineers and software developers.

We are all makers at heart. For all of human history, except the past hundred years or so, when people needed something, they made it. Then came the Industrial Revolution, and eventually we became buyers, not makers. Today’s makers and small businesses are one important key to job creation. A quarter of U.S. manufacturing companies employ fewer than five people, and 60 percent of new jobs generated from 2009 to 2013 were created by small businesses. 3D printing can take us back to our maker roots, fostering technical innovation, new businesses and jobs we never heard of.

John Hornick is the author of the new book “3D Printing Will Rock the World.” He has been a counselor and litigator in the Washington, D.C., office of the Finnegan IP law firm for more than 30 years, advising clients about how 3D printing may affect their businesses. Hornick also frequently writes about 3D printing and has lectured about 3D printing all over the world.