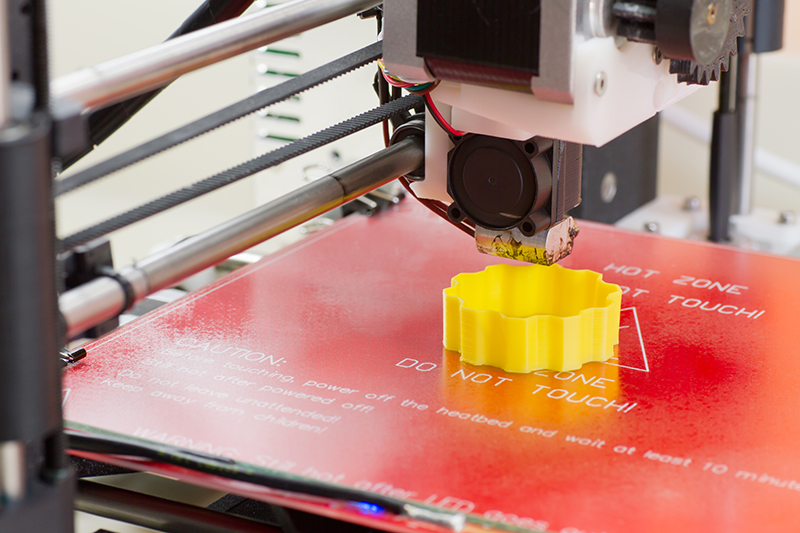 3D printing is all over the news this year. It is revolutionary tech to change the way things are made. I need to confess, I had a moment of extreme slowness when I first heard of the technology. I pictured 3D glasses, lasers all wrapped up in some strange looking contraption. (My brain is soaked in too many 80’s films — Real Genius, My Science Project, Weird Science— so I suppose that explains it.) But this new technology is a way to make a physical object from a three-dimensional digital model, typically by laying down successive thin layers of a material.

First, a little  background. The process of stereolithography is how 3D printing actually works. A container of liquid ultraviolet curable photopolymer resin and a laser are used to build the object in question one layer at a time. In theory you could build a car or make human organs with a 3D printer. It’s like an enormous garage door opener into the future. And once the tech is balanced with affordability (see the evolution of flat screen TVs) we will truly begin to see history being made.

The birth of 3D printing came at the Massachusetts Institute of Technology. MIT worked with a company called 3D Systems and they continue to lead the charge in this emerging field. The first use of this technology was in designing accurate prototypes of products (such as a plane). This allows a company to review its design, looking for last minute enhancements or potential cost savings before the manufacturing process begins.

But what we are seeing now is the changing use of 3D printing from aiding in the manufacturing process to actually being part of it. NASA last year installed 3D parts in its jet propulsion lab for use in a satellite that is now in orbit. Those parts were printed by a company called Stratasys, another major player in the 3D printing world. Stratasys is also in the airline business, printing out 1,000 parts for the new Airbus A350 XWB.

What effect will this have? Like cell phones and the Internet, it will be a massive event changer. Disruption is coming so get ready.

Once printing with metals becomes more common place look for massive shifts in the manufacturing world. Factories will undoubtedly be closed. Experts at Gartner, a technology research company, say 3D printing is about 5 years from becoming mainstream. National manufacturing facilities with large R&D budgets are already researching and deploying this type of tech to prepare for the inevitable change. Now if only I could print up a cheeseburger, a beer and some Zac Brown tickets I would be all set for the weekend.

Blake Dowling is Chief Business Officer at Aegis Business Technologies and can be reached at dowlingb@aegisbiztech.com