AppRiver started out as a two-man operation in April 2002 in the town of Gulf Breeze. Co-founders Michael Murdoch and Joel Smith shared a vision for their company and a love for the area’s natural beauty and quality of life. The region’s pro-business environment was another plus.

Today, the company has 242 employees, with 221 working in the Gulf Breeze location. It has offices in Atlanta; Austin; Lupfig, Switzerland; and Barcelona, Spain. Perhaps most importantly, the average salary paid to employees working in the Santa Rosa location is double the prevailing local average wage and nearly two times the state’s average wage.

“The short history of AppRiver can be summed up as a sales call that led to a friendship that became a partnership that becomes one of the fastest growing and most successful email and Web security companies in America,” says Murdoch, CEO and president. “AppRiver, which began quite literally as two guys and a spam filter, now serves more than 47,000 corporate companies (and 8.5 million mailboxes) around the world.”

Santa Rosa’s top economic drivers are currently tourism, military and agriculture. AppRiver is an example of the type of company community leaders want to see more of. Especially with one of the country’s highest concentrations of retired military living within its borders and one of the best school districts in the state, not to mention available and affordable space, they feel the area is ripe for economic development.

“The talent you have will dictate your level of success,” says Santa Rosa County Commissioner Rob Williamson. “One of the strong suits Santa Rosa has is its workforce and talent. We have talent and space. We need to do a better job of selling ourselves. You’ve got to have the right leadership in place. And people finally have a light bulb going off.”

From Navarre Beach on the Gulf to Milton, Pace and Jay further north, Santa Rosa’s growth spurt is evident. As the population grows, more apartments and subdivisions are sprouting up — 7 percent growth in new residential and commercial building permits in 2015 over the previous year — and new companies are moving in. The county is being courted by suppliers for AirBus, which has a new facility in Mobile, and there is growing interest in the county’s seven industrial parks.

“We are growing leaps and bounds,” affirms Shannon Ogletree, director of Santa Rosa County Economic Development. “Our sweet spot in terms of attracting people is that we have one of the best school districts in the state and one of the lowest crime rates in the state. That’s a good mixture.”

Nestled between Escambia County on the west and Okaloosa on the east, Santa Rosa has a workforce that is about 75,000 strong, but a majority of them commute to Escambia or Okaloosa to work.

“Truthfully, we’re exporting people,” Ogletree says. “We want them to stay closer to home and we’re starting to have success in telling that story.”

The county boasts about 34,000 military retirees — people who have skill sets that companies, especially in the area of technology, are looking for. Many are in their 40s and 50s, looking to start a second career. That could be a major plus for AirBus suppliers.

Meanwhile, some of those who once left Northwest Florida for better job opportunities are beginning to return home.

“We’re finding younger generations who went off to college are coming back, mostly for opportunities in Escambia and Okaloosa. New business coming in strengthens their ability to come back home,” says Shon Owens, president of Owens Custom Homes and a member of the Jay Town Council. “Many people live in Santa Rosa and work outside because of the quality of life. You can live on the north end of the county and have 20 acres of horse pasture, yet within 45 minutes you can be on the beach.”

The population boom has helped local businesses involved in construction and led to a growing retail sector, says Donna Tucker, executive director of the Santa Rosa County Chamber of Commerce.

“You can’t get a painter right now. They are slammed. Flooring people, carpet people, concrete people, everyone is busy,” she says. “And the retail sector is exploding, especially when you start looking at restaurants. We’re getting Cactus Flower, Tin Cow, Five Guys — some of the more trendy Pensacola restaurants.”

A new 40,000-square-foot Publix is coming to Pace and bringing its own strip mall. Dick’s Sporting Goods and Panera Bread are also on the way.

“What’s interesting is that for a long time you could drive from Navarre to Gulf Breeze and it was just vacant lots. Now you can’t find a vacant lot,” says Tucker. “Now from Milton to Pace the same thing is happening — we’re seeing a lot of commercial property going up for sale and residential being rezoned for commercial.”

Ogletree is focusing his economic development efforts on manufacturing companies with a connection to aviation and aerospace. 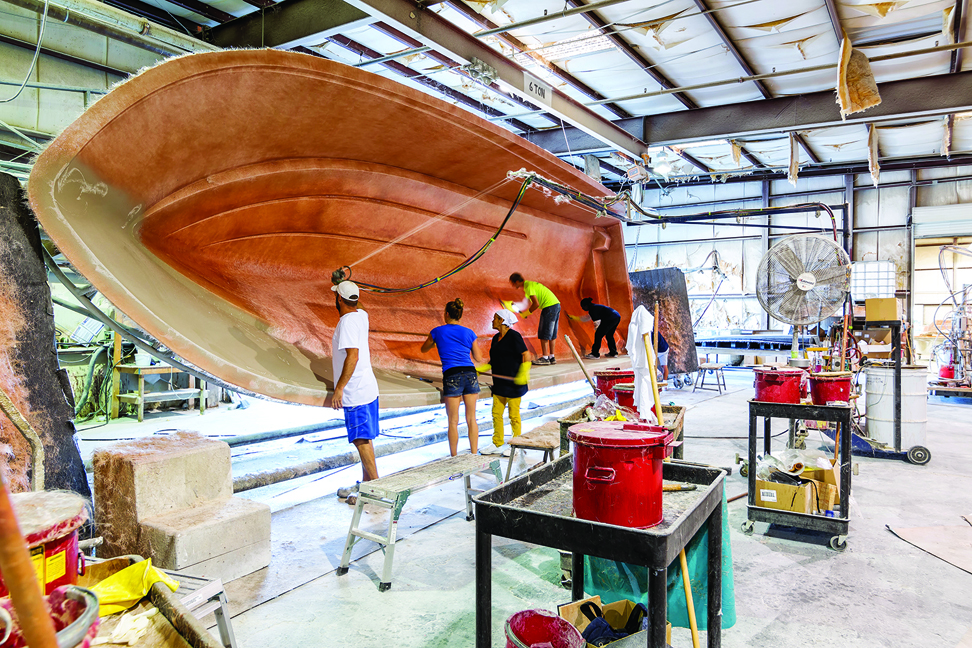 “I’m trying to hit areas like San Diego and Seattle with high concentrations of aviation companies,” he says. “I tell them if they are looking to set up an east coast location, consider us.”

Last year, Aerosync Support Inc., a leader in helicopter repairs, modifications and upgrades, set up shop at the Santa Rosa Industrial Park in Milton. Aerosync purchased the former West Coast Metal Roofing building and is making a capital investment of over $1.75 million in the facility. With the anticipated creation of 25 jobs at an average rate of $60,000, the company qualified for a performance-based incentive program aimed at increasing high-skilled, high-wage jobs in Florida.

In making the announcement, Greg Bartlett, president of Aerosync, said many factors brought the company to Santa Rosa County. “There is a large aerospace market in both commercial and military sectors that is in need of the services we offer. Milton and the Santa Rosa Industrial Park is a great location for us with room to expand as future demands increase. We are very excited about being here and look forward to employing many talented folks in this area.”

Williamson said there has been considerable interest in the I-10 industrial park, explaining “we’re at the edge of the bullseye” for Mobile’s Airbus plant — within easy traveling distance, via I-10, for a supplier to the manufacturing giant. 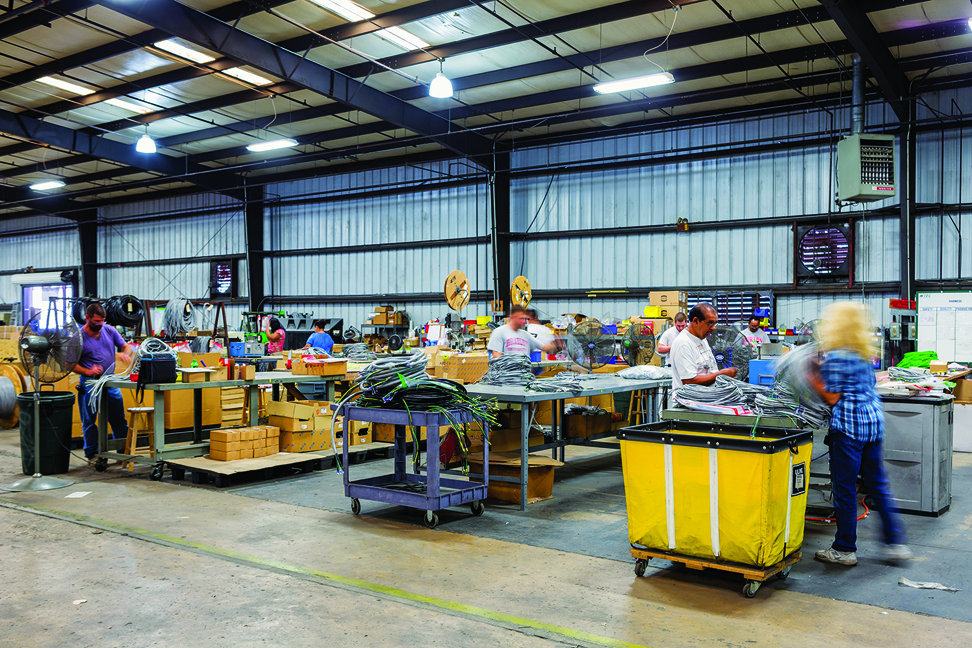 An ally in the county’s economic development efforts is Gulf Power, which launched the Florida First Sites program in 2013. The purpose of the first regional site certification program in the state is to develop project-ready industrial sites. Each site undergoes a rigorous screening process developed by McCallum Sweeney Consulting, which offers an objective, third-party analysis to ensure the sites are ready for development. The program ensures that preliminary work has been completed, taking the majority of the risk out of the site selection process.

So far, Santa Rosa has had three sites certified — more than any county in the region. All are in Milton and close to Interstate 10. The sites are: Jeff Ates Road Industrial Park, with 132.4 developable acres; Vic’s of Navarre, with 186 acres; and Northwest Florida Industrial Park @ I-10, with 88 acres.

Besides the state programs aimed at enticing new businesses to locate in Florida and existing businesses to expand, Santa Rosa also has a program that can reduce the price of county-owned land in an effort to attract companies.

Williamson believes that the town of Milton also offers a great opportunity for Santa Rosa to attract more millennials and entrepreneurs because of its scenic location on the Blackwater River.

“We need to push for a new urbanism. You have to have a vision, and Santa Rosa has lacked a consistent shared vision,” he says.