The Dangers of Energy Drinks 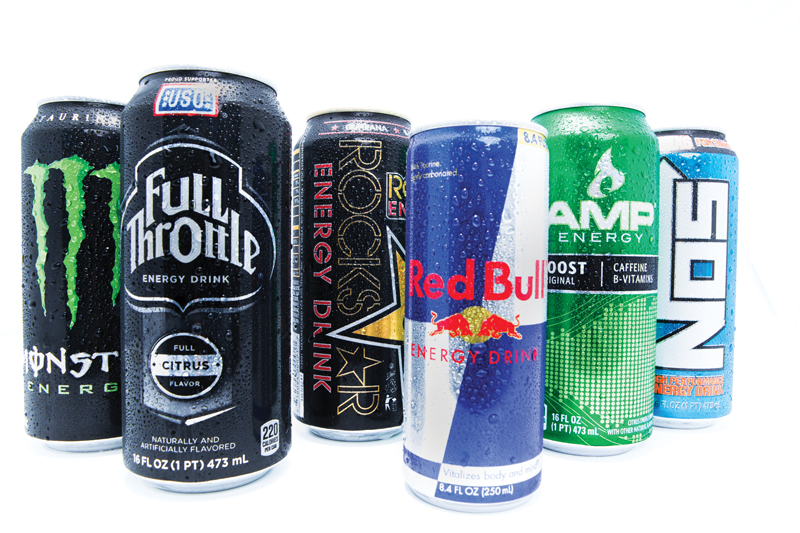 If energy drinks had a doctor-prescribed warning label, it would read something like this:

Product contains caffeine and may also include medicinal herbs. People with anxiety or psychiatric disorders, heart conditions and children should avoid their use. Avoid combining them with alcohol. Everyone in general and elderly people in particular should be cautious using them, especially if the person has a known history of fainting spells, lightheadedness, high blood pressure, diabetes or cardiac rhythm disorders.

Did you get the “everyone in general” statement?

Energy drinks like Red Bull and Monster and “shots” such as 5-Hour Energy are far more than just a quick pick-me-up — and certainly more complex than soda or a cup of coffee. As more and more patients are discovering, these concoctions may have long-term effects on your health.

“I would tell people to simply not drink them — ever,” advises a local physician.

He’s not alone. Doctors are becoming more and more concerned as the effects of these energy drinks compound at an alarming rate in America’s emergency rooms. Commonplace on the market, the products are unregulated and have no warning labels, although many, including several local physicians, believe they should.

Dr. Sam Ashoo, emergency medicine physician and medical director of Tallahassee Memorial Hospital’s Emergency Services, said that while he doesn’t specifically track this information at the local level, there is a nationwide trend of increased emergency room visits due to these drinks.

According to the Centers for Disease Control and Prevention studies, beverages marketed as energy drinks have become a popular source of caffeine, with some brands containing the caffeine equivalent of one to three cups of coffee or cans of soda. While caffeine is the main active ingredient, energy drinks also include other ingredients that claim to boost physical energy or mental alertness, such as herbal substances, amino acids and sugars. About 6 percent of adolescent and young adult males in U.S. civilian and military populations consume energy drinks daily that can have negative side effects, such as caffeine intoxication, overdose, withdrawal and interactions with alcohol.

Dr. Farhat Khairallah, an electrophysiologist at TMH, warns that excessive caffeine can heighten the risk of abnormal heart rhythms, which can have lasting consequences. While there is no clear data that energy drinks cause arrhythmias, Khairallah points out that large amounts of caffeine and sugar can result in palpitations and a sensation of a racing heart.

“It seems that a cutoff of six cups of coffee a day is a threshold over which people might be at risk of developing arrhythmias such as atrial fibrillation or other abnormal rhythms,” he said. That could be as few as two cans of energy drink.

Another problem with energy drinks is how they are used. Most consumers are trying to amp up energy that’s lacking because of a sleep deficit — which has myriad effects on the body. Doctors warn that people should avoid using these drinks to prevent sleep when their body needs rest.

Many young people use them as sports drinks and for general hydration throughout the day. Khairallah believes this is a problem because caffeine, as a stimulant, can increase blood pressure and has diuretic properties. That’s why he and other health professionals warn that you cannot consider drinking coffee or energy drinks as adequate hydration.

Dr. Muhammad Salman Siddiqi, a neurologist at TMH’s NeuroScience Center, believes that there’s more to the problem than just caffeine.

The vitamins and herbal ingredients in energy drinks can have unintended consequences on health. For instance, taurine is an organic acid used in muscles and brain tissue — it’s one of the body’s building blocks. Too much, however, can be a bad thing.

Vitamin B-6 is another common energy drink component. While too little B-6 causes neuropathy — a deficiency of peripheral (such as hand or foot) nerves that results in weakness and numbness — the inverse is also true. Too much B-6 in your diet also can cause neuropathy, and it may not be an easy fix.

“The difference between a poison and a medicine is the dose,” Siddiqui says.

He sees patients of all ages, including a rising number of college-aged individuals, with seizure activity that can cause permanent cognitive decline — that he believes is associated with energy drink consumption.

Besides short-circuiting the brain, these drinks may be linked to sleep disturbances, mood disorders such as anxiety and anger, tremors and increased blood pressure — which could lead to a stroke at any age.

One of the main problems with energy drinks from a medical standpoint is how they are marketed. They are almost described as a health food, when in reality it’s more than just the caffeine that is worrisome. And because they are classified as “food products,” the FDA does not regulate them as they do medications.

However, as Siddiqi points out, additives such as ginkgo biloba and other exotic herbal extracts can have powerful effects on the body. In addition, some of the herbal supplements in many of these drinks are contraindicated with many mainstream prescription medications.

Parents, in particular, should make sure children are not consuming energy drinks. Add to that specific warnings for parents of college-aged children who might mix them with alcohol.

A simple Google search returns hundreds of recipes for energy drink cocktails, with chilling names such as “The All-Nighter,” “1.21 Gigawatts” and “1-2-3-Floor.” Parents of a Florida State University sophomore sued the makers of Four Loco in 2010 after he drank the high-alcohol malt beverage mixed with caffeine, taurine, guarna and carbonation — sometimes called “blackout in a can” — began acting erratically and accidently shot himself to death. While Four Loco was banned for a time, it is back on store shelves after being reformulated to eliminate the stimulants.

Physicians have a special warning for mixing energy drinks with alcohol. “Mixing these drinks with alcohol will have a definite increased risk of cardiac arrhythmias — specifically atrial fibrillation,” warned Khairallah. And adults beware: Older people are more susceptible.

The long-term effects of an overuse of energy drinks are not yet known. It appears that more than one drink per day in a healthy individual may be too much, and the health consequences can be deadly if seizure or arrhythmia results. There is no lower age limit on the risk for these conditions, and young people often add in additional risk factors to their consumption.

Local physicians hope that energy drinks might one day be regulated as the pharmaceuticals that they really are — with interaction warnings, overdose symptoms and age limitations. Until that day comes, they urge you — with great fervor — to leave them on the shelf.

6 Ways To Be Productive When Working From Home

Rally for Tally Aims to Give Eateries a Boost