Northwest Florida Needs a Leg to Stand On 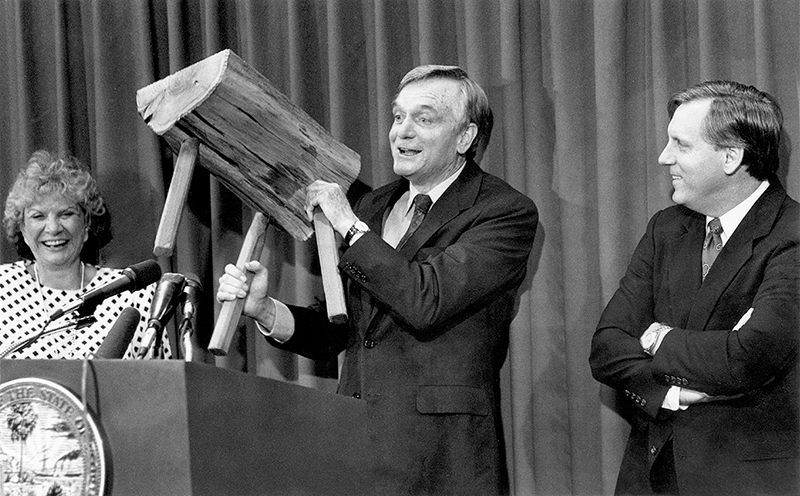 It was one of the most bizarre State of the State speeches I had ever witnessed. Here was newly inaugurated Gov. Lawton Chiles talking about the symbolic importance of the three legs of a stool. To emphasize his point, he reached under the House Speaker’s podium and produced an antique wooden milking stool for members of the state House and Senate to see.

While legislators who were gathered in the state House chambers snickered at the sight, Chiles continued on undaunted. His thesis was simple. The three legs represented the House, Senate and executive branch — and for government to remain stable and succeed it needs all three legs firmly in place.

That memory from the beginning of the 1991 legislative session came to mind as I was working on the Triumph Gulf Coast feature for this issue. The economies of the eight coastal counties that will benefit from $1.5 billion out of the state’s settlement with BP are built on two legs, military and tourism. They need a third leg to ensure they are stable enough to survive military spending cuts and/or another man-made or natural disaster.

Northwest Florida has survived a series of base realignments dictated by Congress and the Pentagon, and the region’s military remains a strong driver of the region’s economy. Tourism, following a two-year dip after the 2010 oil spill, is stronger than ever. But it’s hard to keep a stool balanced with only two legs.

For years I’ve heard talk of the need for economic diversification in the region, something to help keep the economy in balance if there should be drastic cuts in military spending or tourism takes another hit from either a hurricane or another oil leak in the Gulf.

As state Sen. Don Gaetz aptly points out: “If, God forbid, there were a Category 4 hurricane that stirred up the bottom of the Gulf, nobody knows what would wind up on the shores or in the bayous. We live with an unknown potential liability that makes it all the more important that we diversify the economy of Northwest Florida.”

Triumph Gulf Coast, set up through legislation championed by Gaetz, provides the opportunity to help build that third leg. Most importantly, it will be done not by just throwing grant money at various projects around the eight counties, but by ensuring there is a strong local commitment and funding for whatever projects are finally selected by the Triumph Gulf Coast board of directors.

Better yet, those who sit on the Triumph Gulf Coast board cannot be elected officials — eliminating the fear of a politician pushing to fund a project that will sweeten his/her re-election — and there will be strict accountability for how the money is being spent.

When Chiles gave his speech in 1991, Florida was facing a recession and a $1.4 billion-plus budget shortfall. And he was right. The state needed everyone working together.

“Look at this stool,’’ he told lawmakers. ‘’It’s got three legs. If you pull one out, it won’t stand; it needs all three. We need each other.’’