Were he to run for elective office in Bay County — or beyond — Chris Moore might be a campaign manager’s dream.

If you are looking for someone who models adherence to the Scout Law at the age of 55, Moore is your man.

He was born at Guantanamo Bay, Cuba, his Navy father’s next-to-last duty station, but never knew the place. He was a toddler when the family came home to the Naval Surface Warfare Center in Panama City Beach.

Moore attended Bay County public schools, graduating from Bay High School. Along the way, he attained the rank of Eagle Scout as a member of a troop that met at First United Methodist Church. Scouting, he said, fueled his passion for community.

Moore is a third-generation Navy, first-generation officer. He has a son, newly commissioned as a Navy flight officer (four and two), who is stationed at this writing at the NAS flight school in Pensacola.

In a Navy career that spanned 24 years and three months, Moore, who retired with the rank of captain, completed three tours as a commanding officer — with the Explosive Ordnance Disposal Mobile Unit TEN, the Naval Diving and Salvage Training Center in Panama City Beach and the Navy Operational Support Center Atlanta. 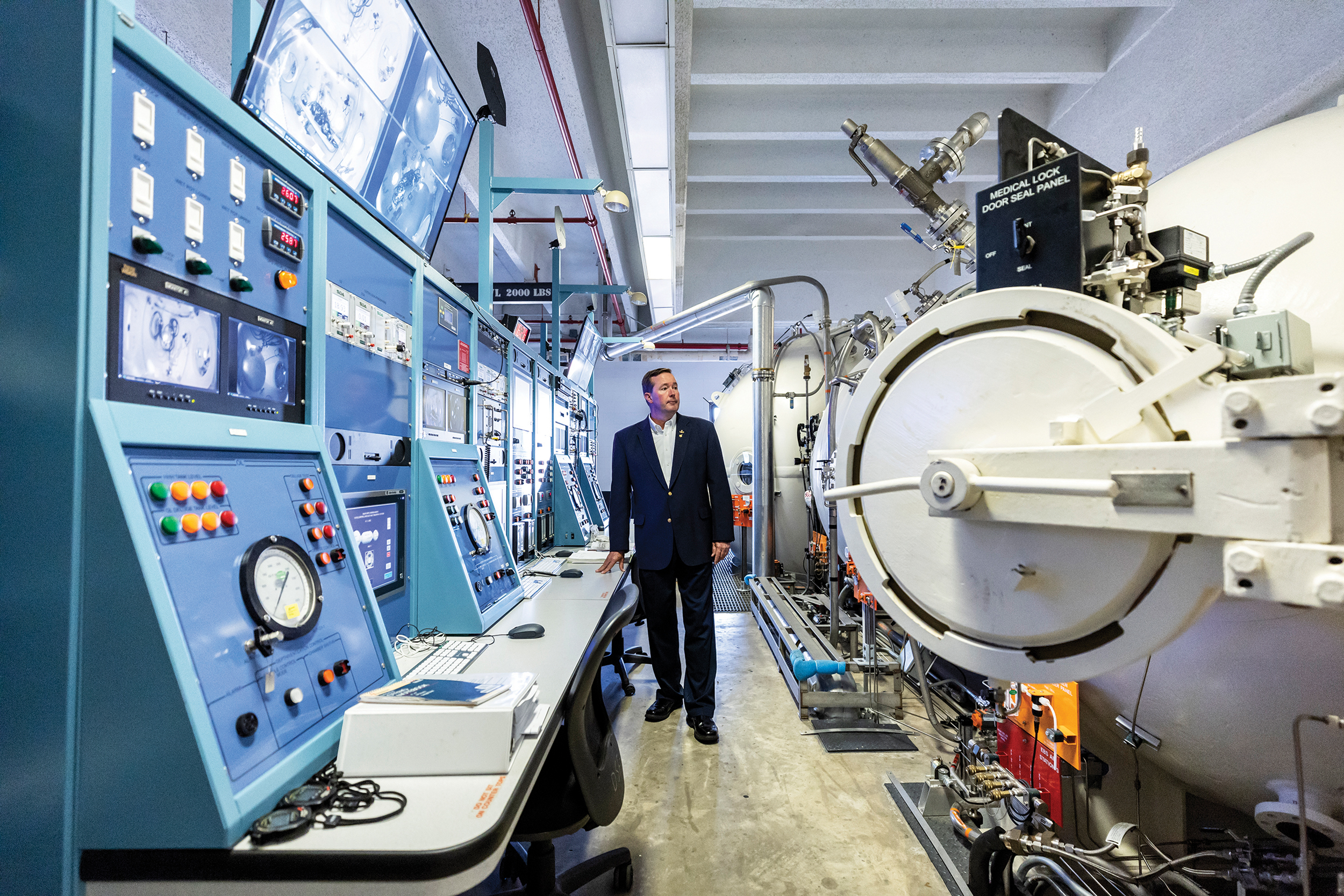 Moore, looks over the four-chamber hyperbaric Dive Simulation Facility used for dive training and medical decompression treatments. Blue panels at left of photo are touch-screen controls for chamber pressure, breathing, fire suppression and other systems. Moore “dove” to a depth of 300 feet during his Helium-Oxygen Dive Officer Training in 1992. Photo by Mike Fender

In becoming an ıı40 Special Operations officer, he qualified as a helium/oxygen mixed gas diver and a hyperbaric chamber supervisor and underwent ıı months of explosive ordnance disposal training at Eglin Air Force Base. He was introduced to some 5,000 classified documents that detail “render safe” procedures related to military munitions from around the world.

Today, he is the senior program manager for General Dynamics Information Technology at its Panama City office. Its chief customer is the Naval Surface Warfare Center.

Moore is the immediate past board chairman at the Bay County Chamber of Commerce and currently chairs the Chamber’s Military Affairs Committee, which for decades has contributed to Bay County’s reputation as one of the most military-friendly communities in the country.

He holds master’s degrees from the U.S. Naval War College (National Security & Strategic Studies) and Valdosta State University (Public Administration). He did his undergraduate work at the University of Florida where he majored in political science. On his LinkedIn page, he lists Tim Tebow as an influencer.

Oh, and the notion that Moore might seek elective office? Truth is, he’s done that, too. Recently, he qualified as a candidate for the District 3 seat on the Bay County School Board, and the incumbent chose not to seek re-election.

Moore, a proven leader in military and private sector roles, now hopes to make a difference as a public official.

“The School Board is something I think I can be effective at and still keep my day job,” he said.

As one might expect, he has done his homework.

“Overhead in the Bay County school district is 50% higher than it is in comparable counties in Northwest Florida,” Moore said. “We need to get business minds involved. I have managed hundred-million-dollar organizations with millions of dollars in equipment. Maybe we can find a way to get some of those overhead dollars in the classroom.

“We need to focus on the fiscal responsibilities of a half-billion-dollar operation.” 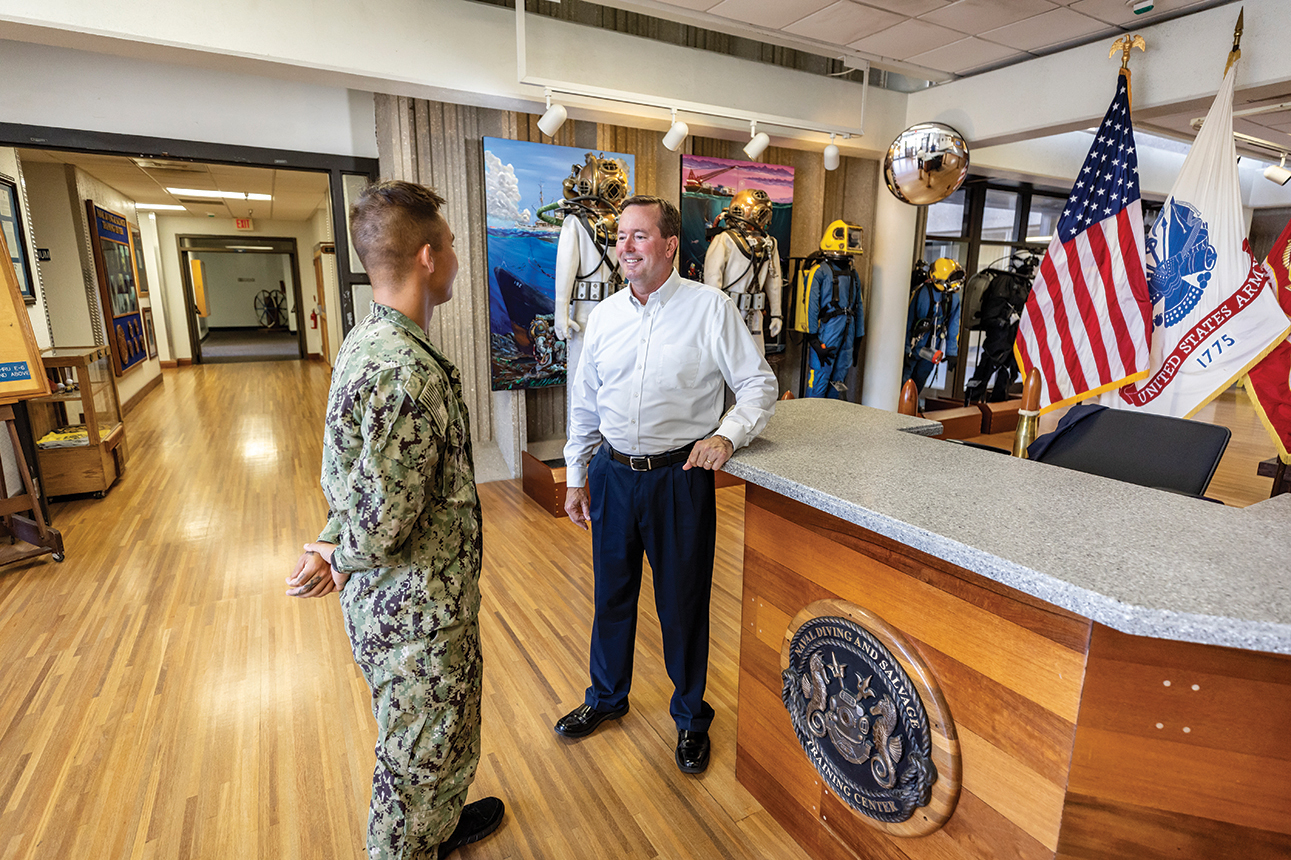 Capt. Chris Moore, U.S. Navy, retired, talks with the petty officer on the watch in the receiving area or “quarter deck” at the Naval Diving and Salvage Training Center. The quarter deck’s flooring is teak wood from World War II era battleships. Photo by Mike Fender

Moore is painfully aware that the U.S. Air Force rates schools within a prescribed radius of its ı57 installations worldwide and that in 20ı9, Bay County ranked ı57th. Two years later, it was ı56th.

Moore was quick to point out that by citing those rankings, he does not intend to admonish the current school board and district administrators — he is kind. He’d rather talk about prospects for improvement.

His speech is peppered with words including planning, mission, accomplishment, forward and upward.

Moore is excited about the $5 billion redevelopment of Tyndall Air Force Base as the “base of the future” and about the benefits likely to emerge from the further integration of the base into the community. He noted that Tyndall brass and the leadership at Florida State University Panama City are working toward the creation of a new STEM school at Tyndall.

Such developments, he said, “will make airmen want to come to Bay County.”

In Bay County, far more than the Air Force base is being restored and advanced, of course. The private sector is moving to address the depletion of housing stock caused by Hurricane Michael. Downtown Panama City has been re-visioned, and evidence of new investment there is growing. The Bay County Economic Development Alliance has enjoyed recent successes including the landing of a $50 million FedEx distribution center.

For Moore, the Chamber is a relevant, vital and active organization that touches all of those efforts.

“It’s a good conduit that brings the business community together,” Moore said. “We look at all the factors that affect business and help ensure that we are moving ahead with forethought and a planned strategy.”

Those considerations include quality-of-life issues that affect where highly skilled employees and highly desirable businesses choose to locate.

Moore said he has been pleased by the downtown revitalization work and would love to see it move faster.

“But all good projects take due diligence and planning,” he said. “We’ve finally got a hotel back in the downtown area, and now we’re working on the next piece — whatever is deemed the suitable replacement for the Marina Civic Center.”

Moore recalls performing as a member of the Bay High School band at the old Civic Center, which was destroyed by Michael. 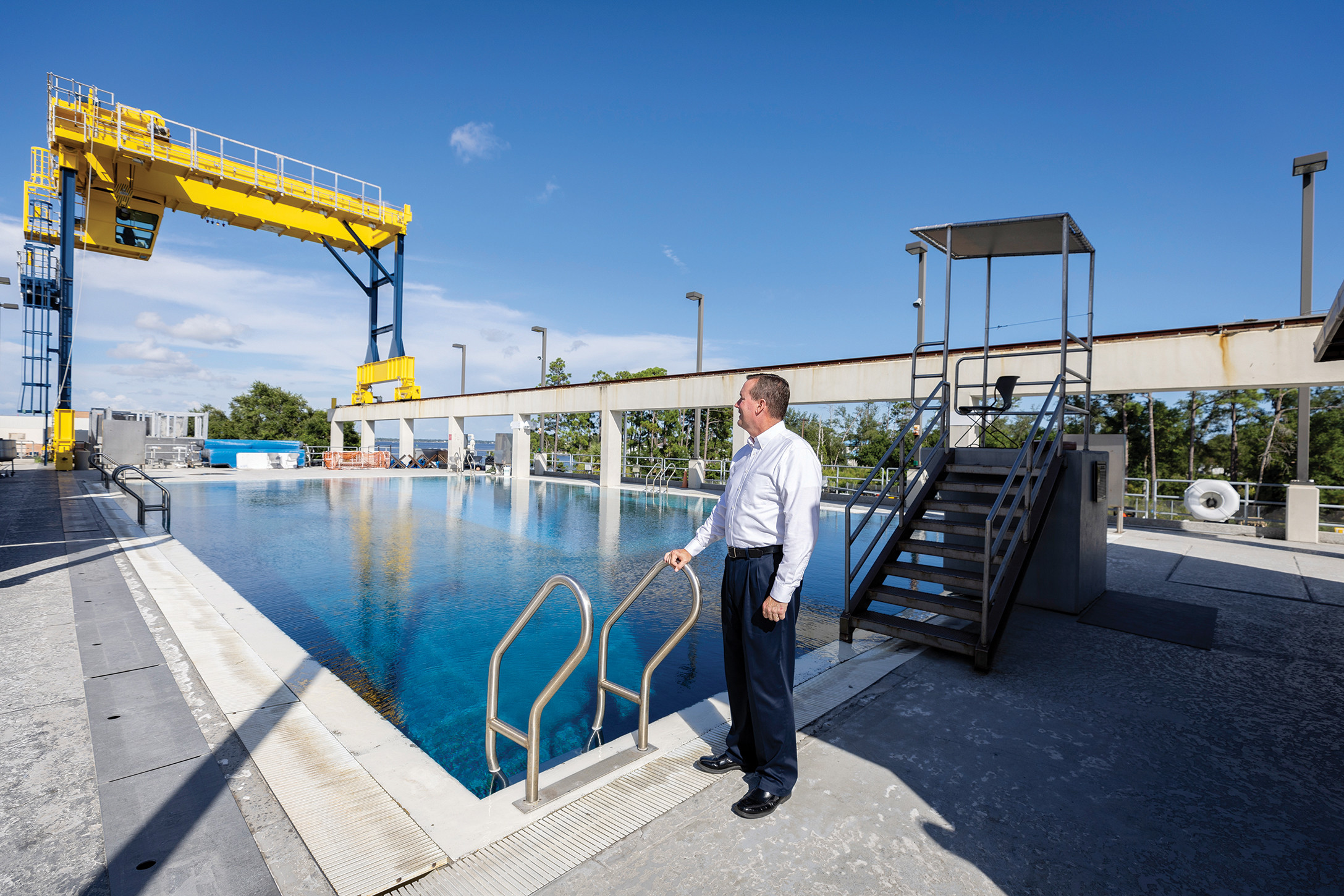 Chris Moore at the Aquatic Training Facility at NDSTC. This pool is 40 feet deep and used during various stages of dive training. In the background is a 60-ton gantry crane used to lower training projects into the water. Moore was the commanding officer of NDSTC when ground was broken on the ATF in 2006. He works today as a senior program manager in the Panama City Beach office of General Dynamics Information Technology whose chief customer is the nearby Naval Surface Warfare Center. Photo by Mike Fender

“And I couldn’t tell you how many recitals we attended there in the ı3 or ı4 years my daughter danced,” he said. He believes the city should work toward a multi-use facility or perhaps two buildings that would serve as both a conference center and a performing arts venue.

In March, Moore, then near the end of his year as Chamber chairman, was present at the groundbreaking ceremony for the Hotel Indigo under construction at Panama City’s Downtown Marina. There was a gold shovel there for him and for Panama City Mayor Greg Brudnicki, U.S. Rep. Neal Dunn, U.S. Sen. Tim Scott and St. Joe Company president/CEO Jorge Gonzalez.

“Today, we are hitting a milestone that is unbelievable,” Moore said at the time. “It’s not just a jumpstart. It’s a supercharge.”

For that, Moore assigned credit to Gonzalez.

“He is prepared to be first,” Moore said of him, citing St. Joe’s commitment to the construction of a large spec building in its commerce center near Bay County’s airport and now its investment in downtown.

“He leads from the front.”

Moore regards himself as something of a libertarian, but he is one for whom some taxes have merit.

He supported the enactment of a bed tax in Panama City and a Bay County half-cent infrastructure sales tax. The former, he said, made possible the creation of a promotional organization, Destination Panama City, and the latter has enabled the county to get started on projects that would otherwise be waiting in line for state funding.

Again, Moore finds that the Chamber, by advancing a legislative agenda, was instrumental in bringing about those levies.

He views Carol Roberts, the Chamber’s longtime executive director and a Chamber employee for 45 years, as a strategically important weapon who is unmatched among her counterparts around Florida.

“She bleeds Bay County, and people statewide will pick up her call, people that others can’t get to,” Moore said. “She has been a tremendous asset because of her corporate knowledge and the continuity she has brought to the Chamber. And, she’s a pit bull. She latches onto a problem or an issue and figures out the best way to accomplish the mission.”

Always, Moore has found people, beginning with his father, to emulate, and he’s not through learning.

“We have a tight-knit community, and that’s to our advantage,” he said. “The circles aren’t huge, and that makes for great efficiency in getting things done. I grew up in St. Andrews as a lower-middle-class kid, and now I’m seeing how the Bay County machine works.”