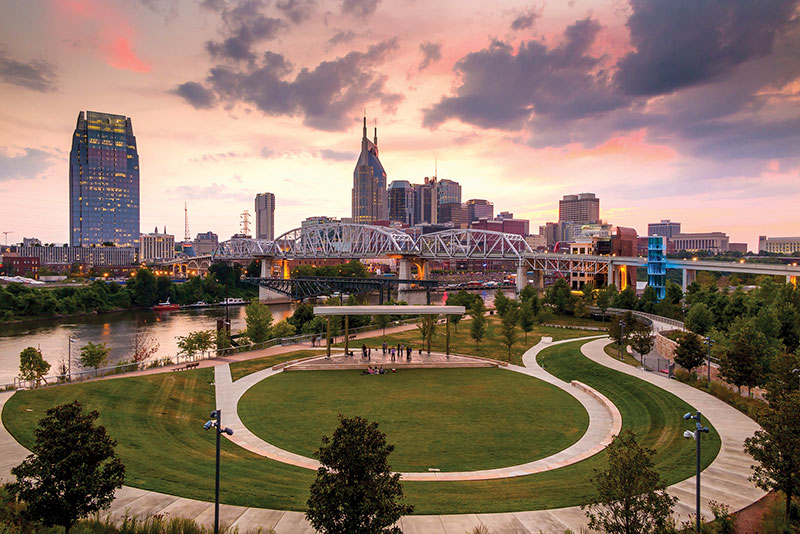 In May 2017, a group of around 80 Tallahassee business and community leaders traveled to Nashville on a fact-finding tour organized by the local Chamber of Commerce. Much like prior trips to Boulder, Austin, Chattanooga, and Madison, the goal was to understand how a city navigated the transition from under-developed to thriving.

Among the people who spoke to 850 Business Magazine about the trip, one theme came up often.

“(In Nashville) everybody is on the same page. Same message. Same passion, across the board,” according to Chamber vice president Jay Revell.

“They have a strong culture of community support and buy-in. Everybody champions the victory of the day, regardless of who gets the credit,” he said.

“We loved the idea of seeing Nashville because its startup ecosystem is on fire. The city has a variety of best-in-class entrepreneur and innovation support organizations that our city can learn from,” said Lindsey, Domi’s executive director. “You can draw direct analogies from many of their best assets — including Vanderbilt’s Foundry, Nashville Entrepreneur Center and Nashville Software School — to programs active in our own community.”

During a stop at the Nashville Software School — a thriving nonprofit that has graduated 500-plus coders into the Nashville-area tech ecosystem — the Tallahassee contingent unveiled the new I/O Code Academy, a joint venture of Florida A&M University, Domi Station and Mayor Gillum’s office, that takes aim at the shortage of skilled technology workers in the Tallahassee area. Local entrepreneur and I/O Academy Director Ryan Kopinsky designed the program to ensure that its graduates are “career ready.”

He added, “We’ve been really good at enabling entrepreneurship in Tallahassee. But we lack the foundation of skilled tech workers who can bring the great ideas to life.”

Kopinsky remarked that the sense of possibility and optimism was palpable: “You could feel that people were actually building something for themselves and their community in Nashville.”

Participants came away with enthusiasm for the possibilities they witnessed in action in Nashville. But they also carried home a few cautionary lessons. Several mentioned the “nightmare traffic” and the strain on infrastructure.

“While it was exciting to see Nashville’s growth, their city was behind the ball and already had major challenges with traffic, gentrification and cost-of-living. These challenges will be Nashville’s barrier for growth eventually,” noted KCCI Executive Director Betsy Couch. “It made me realize how important Tallahassee’s future infrastructure investments are, especially the ones that have and will be funded by Blueprint, but reminded me that we also need to balance that with maintaining Tallahassee’s quality of life.”

Couch specifically noted that musicians – the very people at the core of the Music City brand – are increasingly unable to find affordable housing in the city. This is not unique to Nashville. Success-story cities such as New Orleans, Boulder and Austin share similar concerns: The people who make the city thrive often fall victim to the rising cost that comes with success.

A different element of the Nashville formula caught the eye of Audra Pittman, the executive director of Tallahassee’s Council on Culture & Arts.

“I was especially taken by Nashville’s commitment to pursuing cultural equity. It’s a concerted effort to broaden participation, expand diversity, and build new audiences,” she said.

Nashville has a much more established arts and culture economy than Tallahassee. But even with that difference, both towns share the same kinds of problems — a shortage of viable rehearsal spaces and venues, the challenge of reaching underserved audiences, and the very real problem of diminishing affordable housing.

Pittman asks, “How do we connect people in a way that’s more meaningful? How do we make sure nobody gets left out?”

Taking a cue from Nashville on the cultural equity question, Pittman said COCA has implemented a joint effort with Florida State University arts administration scholar Dr. Antonio Cuyler to examine how to “bridge divides within the community using arts and culture”.

A core value of the I/O Code Academy addresses a similar problem of gender and ethnic equity in tech-sector employment. The first I/O class roster — graduated in December 2017 — registers at approximately 50 percent female and slightly higher for people of color. Participant ages range from 18 to 60-something. Kopinsky confirms that this diversity will be reflected in the upcoming academy courses slated to begin in February and May of 2018.

The COCA and I/O Code equity efforts are concrete examples of learning from the experience of a larger community as it grows and suffers from some of the problems that can emerge from that growth. Examining the successes and pitfalls seen in places such as Nashville gives Tallahassee an opportunity to learn from their hard-earned experience.

Both before and after the trip, a scattered chorus of criticism greeted news of the travel. Aside from the customary complaints about cost, the main objection seemed to center on the choice of Nashville itself. What could Tallahassee possibly learn from a city with a world-renowned cultural legacy, a thriving tech and health-care sector, and a population roughly 10 times greater than our own?

Domi’s Lucas Lindsey offered a succinct response: “Going to Nashville wasn’t about becoming Nashville. It was about exposing local leaders to programs so inspired, supported and effective that they challenge us to think bigger and act faster back at home.”

Marketing Amid a Crisis