“If we want to avoid mediocrity, we have to learn to collaborate.”

“Capitalize on unexpected meetings and pay attention to surprises. The world is connected,
but it wasn’t created that way. Someone made the connections. It should be you.”

— Frans Johansson, founder and CEO of The Medici Group 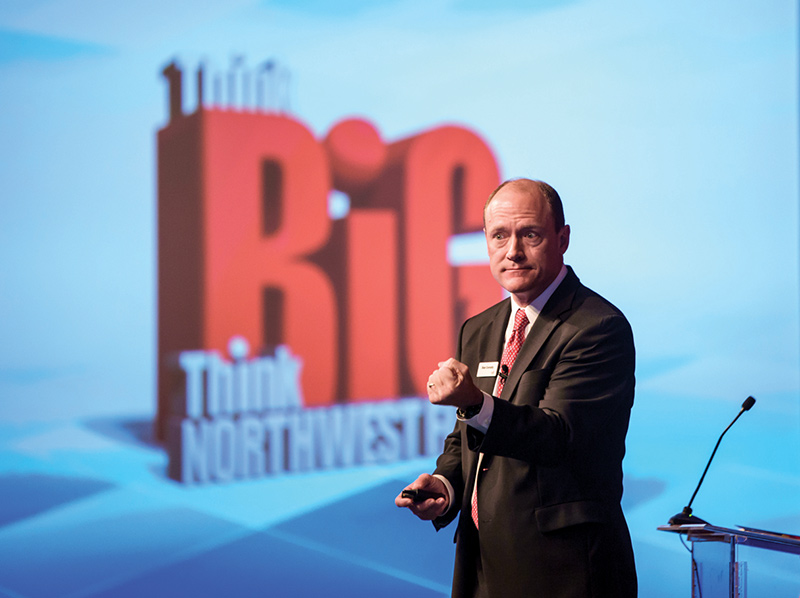 These great words of advice were delivered to the more than 600 business, community and government leaders who attended the 19th annual Gulf Power Economic Symposium held in mid-October — part of a continuing effort by the utility giant to urge Northwest Florida leaders to collaborate, communicate and cross-pollinate.

Henry delivered some of the strongest words that Northwest Florida leaders needed to hear during the two-day meeting, for which 850 Magazine was proud to be a media sponsor.

“Is there a clear and compelling story for Northwest Florida?” Henry asked. “What outcome are you really committed to? Find someone, go up and ask them, ‘What is the best thing happening in our region and why? What’s the dumbest thing we’re doing? What’s the smartest?’ ”

Form a collective, he suggested. Find five people, sit everyone down and start talking about what’s happening in the region.

I got to see some of that happening firsthand. During the two days, there were plenty of huddles to be seen — but the one I loved the best happened over lunch the first day of the summit. Ben Pingree, Tallahassee’s new economic development guru, sat next to Carol Carlan, chair of the Greater Pensacola Chamber of Commerce board of directors. It was the first time they had met, and they immediately talked shop. Synergy is a beautiful thing to watch — and they plan to have more meetings.

Gulf Power deserves many thanks for helping to bring this region together and improve communication between the varied counties and interests. But the symposium happens only once a year, and now it’s incumbent on those who attended to make an effort during the coming year to follow up, communicate with others involved with economic development in the region, find ways to collaborate and learn from each other.

At 850, we have worked to help open the lines of communication in Northwest Florida. And hopefully, we have been successful at educating business, government and community leaders in our region about what’s happening around the corner from their home county. We are an amazing place with so much to offer the country and the world, from tourists to homebuyers looking for a more inviting (and warmer) climate to businesses looking to open, expand or relocate.

The theme of this year’s summit was “Think Big.” As Gulf Power CEO Stan Connally said, “We need to think transformational economic development. We need to be thinking big.” And while each city and county has its own story to tell and sell, he reminded everyone, “We are Northwest Florida. We are bigger than one company, one city. And we need to shop that to the rest of the world . . . Let’s work together. Northwest Florida is not just a getaway, it needs to be leading the way.”

Northwest Florida has a lot going for it, and Connally urges that we erase the lines that prevent us from what we can be. It’s time to decide what we as a region are committed to and passionate about — and then sell it. Florida is growing jobs at three times the growth rate of our population. Most of that growth is happening in other regions of our state, but it doesn’t have to stay that way.

As Tony Carvajal, executive vice president of the Florida Chamber Foundation, reminded everyone: All the advantage “does not go south” in the state.