What’s Next in Tallahassee Developments

As developers overcome obstacles, the city preps for urban transformation

The face of downtown Tallahassee continues to evolve, with work progressing on Cascades Park, the South Monroe revitalization and the Orange-Meridian Placemaking Project.

Easement issues related to the Loews Hotel in Washington Square appeared to have been resolved as of September, and work on the project was set to resume, assuming other legal challenges could be resolved.

Marriott’s AC Hotel line blends European charm with a modern feel. The hotel will have 154 rooms, and the project will also include townhomes, apartments, retail space and parking.

Several changes have been made to the plan over the past year. The original seven-story design for residential space was scaled back to four stories, in order to blend better with buildings in the surrounding area.

And, after considerable public outcry over the removal of most of the trees on the site, developers decided to spare the legacy live oak tree at the corner of Gaines and Calhoun Streets.

The two city blocks that encompass the Cascades Park hotel/residential/retail project were sold to North American Properties and border Cascades Park, a reclaimed former Superfund cleanup site that is now a 24-acre greenspace and park in Tallahassee’s downtown center.

SoMo continues its transformation, as planned projects continue to see reality. Businesses continue to move into the South Monroe area, such as Proof Brewing, which occupies the old Coca-Cola Bottling Plant.

The developers of Cascade Gardens, a combination residential, retail, entertainment venue just south of Cascades Park on South Monroe, continue to fine-tune their proposal as they weigh community and market needs, according to planning officials.

And then there’s the Junction at Monroe, a venue that supports local musicians with a performance space, retail space for their products, and a food space that sells sloppy Joes to patrons.

Local planning officials tout this as an independent investment in the area not tied to or funded by tax dollars, but something that is bringing people and consumer dollars into the area. 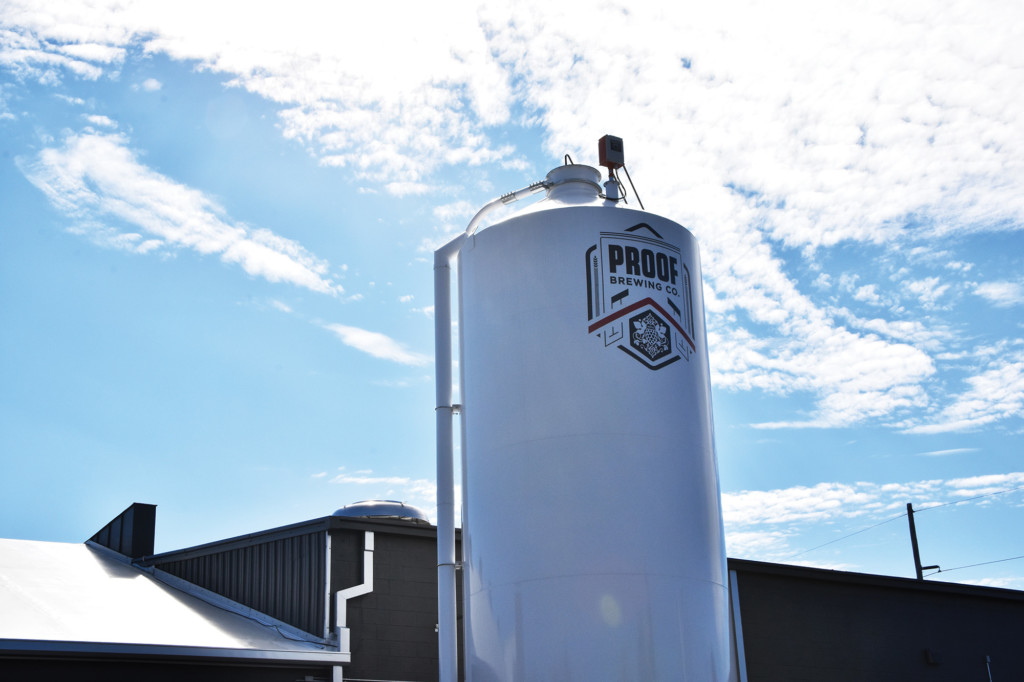 Proof Brewing’s burgeoning beer-making operation and tasting room occupy what used to be a soft-drink bottling plant. Proof has made a significant contribution to the invigoration of the South Monroe neighborhood. Photo by Janecia Britt

Near the South Monroe developments, the Orange Avenue-Meridian Street Placemaking Project continues to be a driver in the entire South Tallahassee revitalization project.

One of the key components is the new South City Transit Stop/Transfer Station at the corner of Orange Avenue and South Meridian Street.

The area had been home to a group of people who held informal flea markets and food distributions in a vacant lot, which often left it trash-strewn and inhospitable.

The city’s bus system, StarMetro, identified it as a key driver for ridership and targeted it as an area for improvement and a potential bus transfer station. The area has been cleaned up and landscaped as a temporary park, with sabal palm trees planted and debris removed.

According to City Commissioner Curtis Richardson, who lives in South City with his family, Leon County Judge Nina Ashenafi-Richardson and their two daughters, the facility will have a bus transfer station on the ground floor and retail space on the second floor.

But the StarMetro facility is just the beginning. Long-term plans call for converting the stormwater holding pond across Orange Avenue into a Lake Ella-style park.

“Hopefully, we’ll be able to get a fountain for it,” said Richardson, who also serves as chair of the Southside-Frenchtown Community Redevelopment Agency through November 2019.

The developer of the hotel — part of a mixed-use hotel, office space and garage complex between Calhoun and Gadsden streets behind the county courthouse — and the city came to terms Aug. 20 over a lawsuit regarding an easement involving the ground floor of a city parking garage adjacent to the property.

The sticking point appeared to be an understanding of what the easement actually meant.

The city believed the easement covered the garage, which was built on land the city leased.

The developer believed the easement was tied to the land on which the garage sits.

The agreement calls for the developer to drop its lawsuit against the city and to buy the easement to the first floor of the garage in a noncompetitive bid.

Fairmont Tallahassee, the developer, also agreed to buy no-build air rights on the hotel property’s southern border, which gives it control over what can be built over the easement.

What was not resolved in the settlement were several liens filed against the developer for nonpayment of contractors and subcontractors.

Work had halted and no explanation had been given as to how the easement conflict prevented payment to construction contractors.