Lobbyists look to 2018 for greater yield

When the Florida Legislature convenes in January 2018, the North Florida business community will be eager to tackle workers’ compensation, insurance claims, economic development and a broad spectrum of other issues.

Many are hopeful the next legislative go-round will be more fruitful than the last.

The 2017 session “was more about missed opportunities,” said Frank Walker, vice president of government affairs for the Florida Chamber of Commerce. “We didn’t see an overwhelming amount of legislation pass.”

Business advocates do tout some successes, including the restored funding of Visit Florida, the state’s tourism marketing organization; at least $85 million in targeted economic development, passed during the three-day special session; a slight reduction in the commercial business rent tax and a boost for wireless technology.

Space Florida escaped budget cuts, especially beneficial for Pensacola, “which is up and coming” in its business relationship with the state’s aerospace economic development agency, said Agustin Corbella, senior director of government law and policy for the law firm GreenbergTraurig. Space Florida received $19.5 million for the budget year, which started July 1.

Yet business interests caution there is a lot of “unfinished business” to address next year.

Workers’ compensation reform was considered the “biggest single issue” of 2017, said Tom Feeney, president and chief operating officer of the business lobbying group Associated Industries of Florida. Except for a public records change, the legislature failed to do anything substantive about double-digit rate increases, he said.

The quandary stems from two 2016 Florida Supreme Court decisions that declared several provisions of the state’s workers’ compensation statutes unconstitutional. Business leaders said those decisions weakened legislative reforms approved in 1994 and 2003 meant to curb the system’s growing costs and rising premiums for employers and businesses. Florida’s rates had been among the highest in the country.

Following the court decisions in 2016, state regulators approved a 14.5 percent increase in workers’ compensation rates (for policies written after Dec. 1, 2016).

“As a result, by Dec. 1 of this year, each business (requiring workers’ comp) in Florida will end up seeing see a rate increase because of these court cases and because the legislature did not reach a decision this session,” said Lance Lozano, CEO of the Florida United Businesses Association, which represents 6,800 small businesses statewide.

The 14.5 percent hike  “won’t be the last increase if we don’t get some meaningful workers’ comp reform across the finish line,” cautioned Walker.

The legislature did approve one workers’ comp issue — House Bill 1107, which protects private information on workers’ compensation claims from public records. Business groups praised this measure as a way to keep attorneys from flooding injured workers with offers to sue their employers, said Lozano.

Workers’ comp and the business rent tax will again be among prime business issues for 2018, along with controversial Assignment of Benefit insurance arrangements (prevalent in water and roof claims across the state), health-care issues, gambling, retirement plans and economic development, including initiatives for rural “areas of opportunities.”

Aside from legislative action in 2018, “expect to see bold ideas from the Constitution Revision Commission,” said Hayden Dempsey, chair of Government Law and Policy Practice for GreenbergTraurig.

The Constitution Revision Commission convenes every 20 years to review Florida’s Constitution and recommend changes to Florida voters. “These should be big items with big impact. Businesses ought to look at that,” said Dempsey. 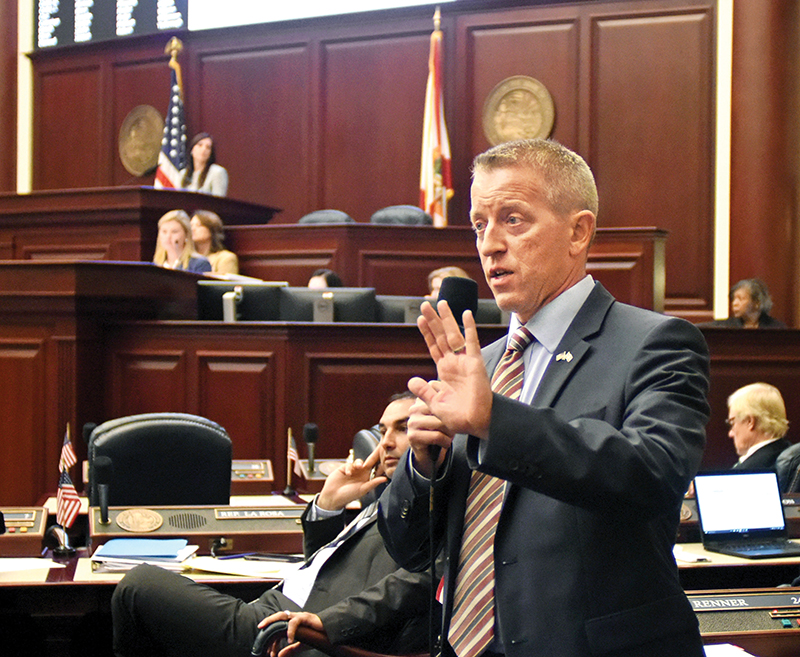 Here’s a look at some of the bills now in effect that could be impacting your business.

Economic Development (HB 1A) This bill, passed during the special session, spared Visit Florida a deep budget cut and restored funding to $76 million for tourism marketing.

“Better late than never,” said Walker, who chided lawmakers for not passing the funding during the regular session. The Chamber hailed HB 1A for providing “proven, high-yield tourism marketing efforts with necessary protections for taxpayers.”

These efforts are essential, said Corbella, because Florida not only has to compete with the rest of the country for tourism dollars but “with countless countries around the world.”

Enterprise Florida lost most of its money for job incentives, but legislation provided $85 million for public infrastructure and job-training projects during the special session.

“It does basically support a public need while helping a company make a decision” about coming to Florida, Feeney said. “It’s a lot better than doing away with it.”

Walker applauded “Florida Chamber-backed language” that “preserves employers’ right to insist on a Drug-Free Workplace.”  “It was one of the few wins for the business community,” he said.

Business Rent Tax (HB 7109)  As part of a bill including a wide range of tax reductions and modifications, the tax on rent for commercial properties was slashed from 6 percent to 5.8 percent.

“Florida is the only state in the nation that charges a business rent tax,” said Lozano. “This issue has been talked about for the last four sessions and there’s been no activity on it until this.”

The tax is harmful to small businesses and businesses that need space for limited contract work, Feeney said. He noted that aerospace companies and defense contractors in Northwest Florida that receive short-term federal contracts, for example, are more likely to rent a building than to buy a space.

At GreenbergTraurig, Dempsey said business leaders see this slight reduction in tax as “symbolic” but “a good first step.”

“While it’s a small cut, it’s important to the business community,” agreed Feeney. “We would like to see the tax ultimately eliminated, but in terms of budgetary impact, we realize that’s probably not practical.”

House Bill 7109 also includes exemptions from sales taxes for the purchase of building materials used in new structures constructed in rural areas of opportunity; health products for livestock, poultry and aquaculture; and property used to construct and equip a large capacity data center, among other provisions.

The bill allows for a three-day “back to school” sales-tax holiday and a three-day disaster preparedness tax holiday, which took place over the summer. These tax holidays come up for reauthorization each year.

The aim is to increase the availability of 5G wireless technology throughout Florida. Local government leaders contend the legislation removed regulatory control from their towns and cities, but it was applauded by most business groups.

“It will be one more quantum leap in facilitating wireless communications,” said Feeney.

Ridesharing (HB 221)  The bill prevents local governments from regulating ridesharing companies such as Uber and Lyft and sets statewide requirements for insurance and driver background checks for those companies.

Solar Amendment (SB 90) The legislation enacts Amendment 4, a constitutional amendment exempting homeowners and businesses from property-tax increases if they install solar panels. It also set up a framework for being able to sell back excess power, said Dempsey. In 2016, 73 percent of Florida voters supported Amendment 4.

Alcohol (HB 689) The bill reduces annual craft distillery licensing fees from $4,000 to $1,000; allows minors to work in stores that sell alcohol as long as they are supervised by an adult; and also changes the definition of wine to include sake, the Japanese alcoholic drink made from fermented rice. Sake will be taxed as a wine, not a beer.