From the roadside, the main facility of Oglesby Plants International (OPI) — just north of the small community of Altha in rural Calhoun County — resembles a nondescript agricultural processing plant amidst a vast expanse of croplands. Step inside, however, and you discover a multimillion-dollar company with a state-of-the-art research and development arm and a national/international reputation in horticulture.

Headed by partners Gary Hennen (president), David Oglesby (vice president) and Mary Oglesby McKenzie (secretary/treasurer), OPI annually produces 12 million young plants, which it supplies to 400-plus commercial growers the world over. The company, moreover, is universally recognized for the propagation and production of tropical/perennial plants and ornamental grasses, with a product line of 150 or so different species and the development and production of between 10 and 20 new varieties every year. Not to mention that its 90-strong workforce ranks OPI among Calhoun County’s top five employers. 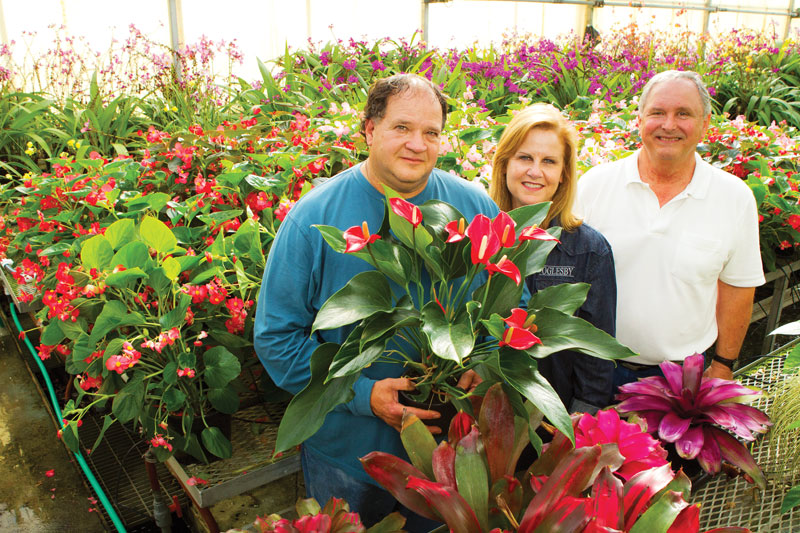 “We’re the starting point for the nursery industry,” Hennen says. “If you visit your local garden center, you see beautiful, well-grown potted plants. We’re the people who cultivate the plants and send them to the wholesale growers to grow larger, before they go to the retail companies. We develop new varieties, improve varieties, come up with new flower colors, new methods of growing, new leaf shapes, disease resistances — all kinds of criteria that we develop through a breeding process. Then we propagate them, primarily using plant tissue culture, and market them to commercial growers. Eventually, they end up with retail consumers.”

Plant tissue culture (PTC) — variously called micropropagation, meristem culture and cloning — involves the replication of vegetative tissues in nutrient-rich culture media under aseptic conditions. This method not only allows for the rapid duplication of plants, it also greatly reduces the transmittal of diseases, pests and pathogens. Raymond Oglesby, who founded the company in South Florida in 1947 and moved it to Altha in 1984, is an acknowledged pioneer in the commercial use of PTC, which was largely confined to academia before the 1970s. Oglesby’s early PTC experiments focused on the Aztec Gold daylily.

“The theory is that from a single plant cell you can duplicate a plant,” Hennen explains. “We don’t go down to a single cell, but we’ll take a bud — the growing point of a plant where the leaves and stems come out — and we’ll isolate a piece no bigger than a dot and put it in a test tube with a fancy fertilizer solution. If we do everything right, that tiny bud will grow and eventually little leaves will pop up. We then transfer the plant to a new medium and using different chemicals tell it to start branching. We then cut these branches and put them in new tissue cultures. So we start with one and get two, and from two we get four, and from four, 16 — it’s a geometric progression. And over a short period, we have hundreds of thousands of plants.”

It takes about five years from the breeding/development stage to the retailing of a new variety, a process that entails much testing, teamwork, creativity and not a bit of risk and luck in anticipating future market trends. And it’s all accomplished within the lab and greenhouses, making for an intensive agriculture operation. Which explains why Oglesby doesn’t require the large acreage that more traditional nurseries require.

“You can grow a lot of plants in 3½ acres of greenhouses,” Hennen says. 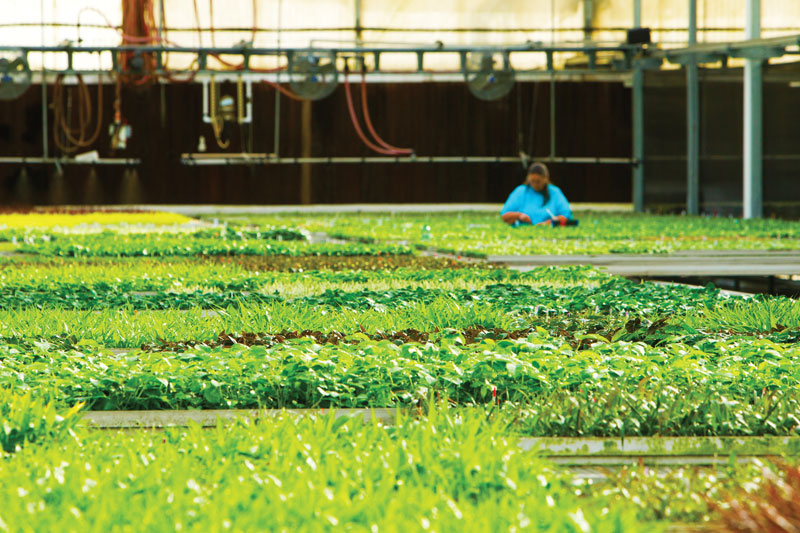 A tour of the operation typically begins with the 15,000-square-foot laboratory adjacent to the administrative/sales offices. A series of separate and specialized airtight rooms, the laboratory is where the bud tissues are developed and grown inside test tubes and jars containing gel-like cultures unique to each species.

Inside the various sterilized lab rooms — visible through plate-glass windows and resembling clinical settings — workers in lab coats go about their designated tasks in strict adherence to established procedures.

“You can lose a culture if you don’t follow protocol,” Hennen says. “It’s like a hospital. You have to have a lot of controls to keep the patients alive.”

Once “harvested,” the plantlets are counted, graded and packaged in clear plastic bags and boxes for transport to the greenhouses or direct shipment to international customers, respectively.

The reason for the direct shipments is that some countries won’t allow the import of soil-rooted plants, as soil may contain insects, diseases and other pathogens.

“They’re easy to ship this way and pass borders efficiently,” Hennen says of the tiny plants, resembling nothing more than boxed salad greens.

Plantlets not shipped go to the research and development greenhouses behind the administrative/lab building, where they are soil potted and grown to a certain level. Here also are kept the breeding stock plants, each possessing a distinct and desired trait, whether it’s a flower color, leaf shape or unusual configuration.

“Some of these are 20 years or older,” Hennen says. “We use them for their genetic lines. The breeder takes pollen from one and puts it on another to develop a new flower color or leaf shape or whatever.”

Once the breeder creates a new variety, it goes to the research and development people to figure how to grow it in a lab environment. If successfully grown in the lab, the new plant is returned to the R/D greenhouses for monitoring to ensure it exhibits the desired qualities before going to national and international commercial growers for testing in different environments.

“If test growers like the plant, we know we’ve got something,” Hennen says. “If they say, ‘Boy, this is a real dud,’ we throw it away and start again.”

Once a plant is a go, it’s patented, listed on the company’s products brochure and website, exhibited at trade shows and actively marketed to commercial growers and garden centers.

Oglesby’s nursery proper is three-fourths of a mile from the main facility and consists of several greenhouses, each with a specific function. Here the soil-rooted miniature plants are finished, quality inspected, bar-coded for genetic lineage and accountability purposes, and ultimately shipped. 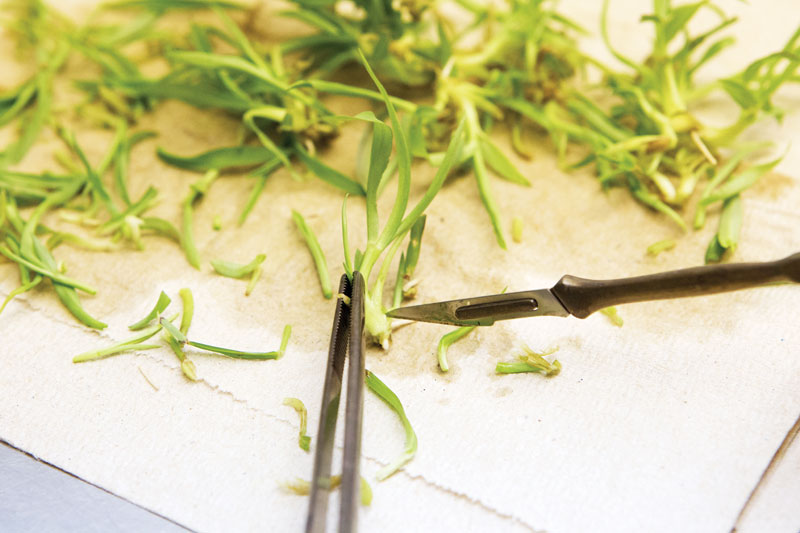 Scott Holstein
In the lab, plants are removed from the culture jar and sent to greenhouses for planting or placed back into another culture jar for further observation.

These are high-tech greenhouses, equipped with computer-operated systems that ensure maintenance of the proper temperature, ventilation, watering, fertilizing and lighting schedules for the different plant varieties 24-7. Should a power outage or other malfunction occur, generators automatically kick in to operate the systems.

The nursery also contains an outdoor garden where new and experimental plants and grasses cultivated by Oglesby’s breeder, outside professionals or hobbyists, are tested. If a breed proves viable and goes into production, Oglesby pays the breeder royalties.

Hennen notes that Oglesby’s seemingly simple yet extremely efficient and effective operation is the culmination of years of experimentation and forethought, if with a bit of fortune thrown in.

“Gregor Mendel was lucky he happened to pick the pea, which has a small number of chromosomes,” Hennen says of the 19th-century friar/scientist whose pea plant experiments led to modern genetics. “Had Mendel picked something more complex, the field of genetics might be years behind. And Ray Oglesby was lucky he picked Aztec Gold, a daylily that does very well in plant tissue culture. Had Ray picked another of the daylilies, we might not be here.”