Five stories high and composed of 103 rooms with balconies that overlook the Gulf, the landmark El Governor Motel in Mexico Beach stands out, its white rectangular shape visible from almost anywhere on the crescent beach. Indeed, from its erection in 1989 until recently, the El Governor was Mexico Beach’s only structure that could boast the city’s maximum allowable height. Add its beachfront location, adjacent 21-room annex, pioneer status in the community, and same-family ownership since 1976, and the El Governor gains singular distinction in the small Bay County community.

At the El Governor’s helm are Kathy Sloan and Wylie Petty. Sloan, the daughter of original owners Dorothy and Don Baxter, is president of Baxter’s Realty Inc., which owns the motel and its sister RV park across U.S. Highway 98. She and husband David also own and operate the Marianna-based Baxter’s Asphalt and Concrete Company, which her late father started in the 1960s.

When it comes to the El Governor’s management, Sloan, unlike her father, takes a more hands-off approach, to a degree.

Petty, the motel’s manager for 18 of the 21 years he has worked for the Baxter family, handles the day-to-day business and is the El Governor’s public face and goodwill ambassador in the community.

“My job is whatever it takes to make the place run smoothly,” says Petty, who started out in maintenance. “If I have to, I’ll clean rooms, fold laundry or work the gift shop.”

“We did over a quarter-million dollars of revenue that we hadn’t anticipated,” Sloan says. “Which is wonderful, because it gives us more money to put back into the motel and keep it in shape for people to enjoy.”

The only better year, Petty says, was 2007, right before the Great Recession. Counterintuitively, 2010 also was a good year, despite the BP/Deepwater Horizon oil spill in the Gulf.

“It sounds weird to say, but the oil spill actually helped us,” Petty says. “We didn’t have oil on our beaches, and people who still wanted to take vacations came to the beaches that were the farthest out of the oil zone, which happened to be Mexico Beach. Some of those people had never ventured this far before, but now they return regularly.”

The El Governor, it seems, is immune to economic adversity.

“Back when gas prices were crazy, we actually saw an increase in business, because people who maybe couldn’t afford to go across the country could afford to come here,” Sloan says. “So the economy has never really hurt us so far.”

Although the El Governor draws guests from around the country, including many snowbirds, its mainstay is young families with children and retirees, most residing within a day’s drive of the town. Largely dependent on repeat customers as well as mail-outs and word-of-mouth for its advertisement, the El Governor’s staff strives to create a homey atmosphere for its clients.

“If you stay with us three or four times, you become family,” says Petty, who typically greets guests with a hearty ‘Welcome home.’ “We may not know everybody’s name, but we know your face. And we know your spirit generally. We know if you’re a nice person or not.”

Their biggest challenge, the two say, is finding qualified help, especially housekeepers, who make up the majority of the El Governor’s 30 to 35 employees. Although this sector tends to have a high turnover rate given the seasonal nature of the work, the El Governor bucks the trend. 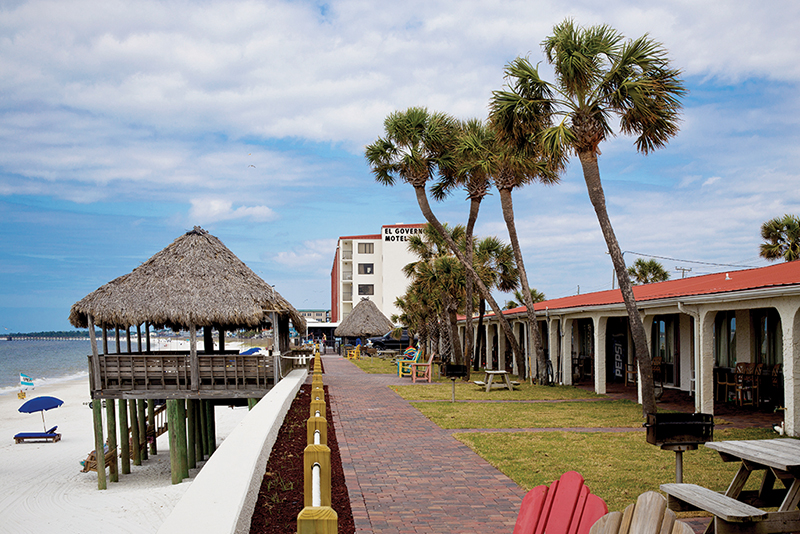 “We pay 40 hours a week even during the off-season so that we have good, dependable workers come summertime when we need them,” Petty says.

The outcome is stability.

“At least 75 percent of our staff has been with us a minimum of five years,” Sloan says. “And most have been with us much longer. That’s good for them, good for us and good for our guests, who enjoy seeing the same people.”

Whatever the reason — whether an improving economy or Mexico Beach’s growing reputation as a destination point — bookings are up.

“More and more people are coming and telling others about it,” Sloan says. “It’s reached the point that it’s sometimes hard to get a room, especially during the prime time.”

Don Baxter would be pleased. When he purchased the original 1950s-era Governor Motel, now the annex, and determined to build the high-rise, the idea was radical enough that it engendered no small amount of opposition. Described as a man of vision and indefatigable spirit, Baxter battled for years to get the project approved, and then had to borrow heavily to get the building constructed.

“He was the kind of person who, when he believed in something, he didn’t back off,” Sloan says.

His one failure — his inability to convince the city forefathers to forgo the five-story restriction — Sloan now views favorably, given that it helped preserve Mexico Beach’s open ocean views and small community flavor.

Baxter did, however, have the foresight to construct a seawall to mitigate against storm surges.

“He knew that at some point the city fathers wouldn’t allow it,” Sloan says. “So he built a seawall across both properties.”

The seawall allowed him to build right on the beachfront — something that later setback requirements prevented.

The seawall notwithstanding, 1995’s Hurricane Opal caused more than $1 million worth of damage to it and the motel, and Baxter, who died in early 1997, spent the last year of his life restoring the facility.

“I thank the Lord he was able to do it, because I don’t know that David and I could have at that point since this business and the rock mine got dropped on our laps,” Sloan says.

Thankful also are the countless visitors who otherwise might not have been able to enjoy a stay in Mexico Beach but for Baxter’s vision and determination.