The Beachside Bar on the Florida-Alabama Line Keeps Growing

It is a bar built on a line in the sand, fit for a line in a song.

When the music stops and the mullet have been tossed, the Flora-Bama Lounge and Package Store is just another bar. Ink pen graffiti on the bathroom stalls, old men huddling to talk over days gone by, the stale smell of beer and floors that stick to your shoes.

But the music never stops at the Flora-Bama. And its annual Mullet Toss just keeps getting bigger and better. So the owners’ dream plays on another day — as persistent a melody as floats on the salt air, well into any given morning.

It was 1962. The Tampary family of Pensacola owned the strip of pristine white beach that would become the site of the “World Famous Honky Tonk.” At that time, there was no access to the land, so the Tamparys lobbied the states of Florida and Alabama to build half a bridge each over the Perdido Pass. Alabama ultimately built the entire bridge in exchange for two miles of coastline, and Florida constructed a road leading to the new state line, where the original Flora-Bama was built in 1964.

It burned to the ground the day before it opened. 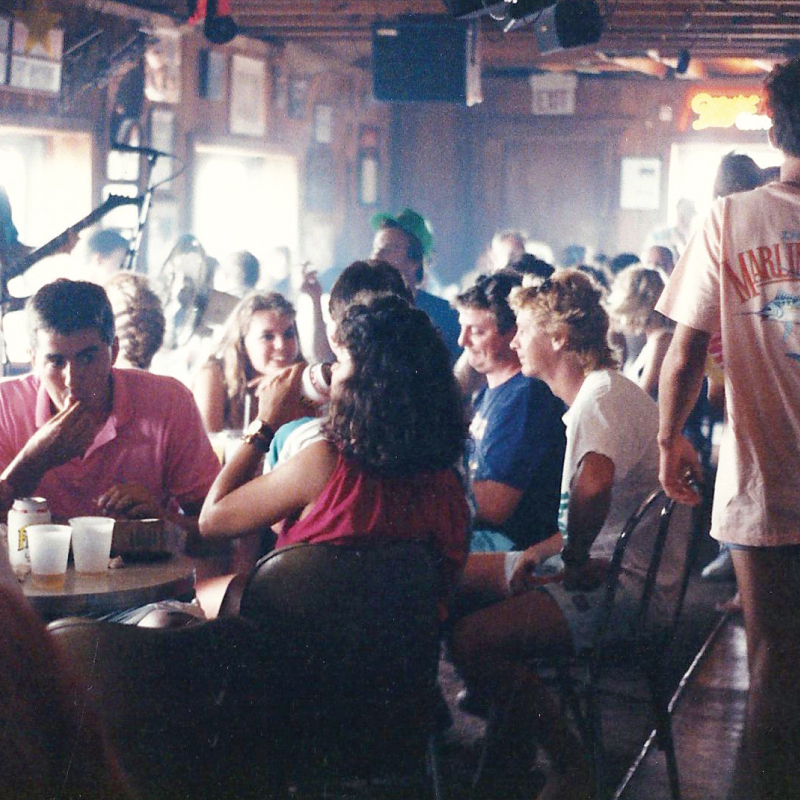 But the Tamparys’ vision did not. Theodore “Ted” Tampary, along with sons Connie and Tony “Bubba” Tampary, officially opened the Flora-Bama in the fall of 1964, just a few months after its scheduled debut. As the sole seller of liquor in the area, the bar kept busy servicing thirsty fishermen and construction workers. You could say they poured more than they could swallow; the business was growing too quickly to maintain while raising their growing families.

In 1978, Joe Gilchrist, real estate entrepreneur and schoolmate of the Tampary boys, acquired the wave-soaked watering hole. A one-time liquor distributor for Pensacola’s Lewis Bear Company, Gilchrist brought beverage sales experience, along with a deep appreciation for original music and the people who sang it. He hit a high note in 1979, when he first expanded the bar to include a stage and pool hall.

By 1984, a burst of development on Perdido Key called for all-hands-on-deck to build upon the Flora-Bama’s growth and prosperity. Gilchrist enlisted former Naval Public Affairs Officer Pat McClellan for his expertise in advertising and event planning. (He can also be credited with the addition of the first toilets to connect to the municipal sewer system.)

McClellan was the creative spark behind the Flora-Bama’s beloved calendar of annual events, including the “Polar Bear Dip” — when participants jump into the frigid Gulf of Mexico on New Year’s Day — and The Mullet Toss — when dead fish are chucked from one state to another for local youth charities, a display of humanity so odd it could only happen here.

The Flora-Bama enjoyed two decades of seaside success before Hurricane Ivan hit in 2004. Then came the economic downturn, followed by the Deepwater Horizon oil spill. Suddenly, the landmark found itself in deep financial trouble.

Despite everything, the bar wears its scars proudly, like war wounds, each plank of wood numbered and pieced back together like a puzzle; the water line marked as a sign of remembrance. There’s one hell of a party every night.

In 2011, John McInnis III of Orange Beach, Ala., whose family’s McInnis Company has made a life of building roads and bridges, himself became a bridge to the future of the Flora-Bama. Along with new General Manager Cameron Price, graduate of West Point and M.I.T., McInnis joined the ownership team to rescue and rejuvenate the struggling business, preparing it for its next 50 years.

With a new cast of characters in place, the bar — celebrated in song, on screen, on palette and page — is poised for success and loving every minute.

The owners attribute the Flora-Bama’s resilience to one thing — the people. Its patrons run the gamut from young to old, wealthy to humble, famous to common, local to international.

“It’s always been about people, from all walks of life, who have returned again and again, generation after generation, to enjoy the camaraderie, fun, food, music and great times on one of the most gorgeous beaches anywhere,” says McInnis.

Of course, like any well-run business, the focus is not only on the people who stop in, but also those who serve them. Flora-Bama employees are family — a team so loyal, only one new bartender has been hired in the last three years.

“It’s a family-run, feel-good place to work,” says Candice Blake, a new addition to the management team. “We take care of each other, and we take care of our guests. It’s hard not to be happy here.”

That happiness pours in to everything the Flora-Bama does.

“The employees and owners have sacrificed a lot of their lives to make sure that when visitors come to the Flora-Bama, they feel at home and are able to escape reality for a while,” says McClellan.

It is evident the team’s sacrifice has paid off. In 2012 alone, CNN Travel named Flora-Bama the 17th Best Beach Bar in the World, while Playboy Magazine has named it the No. 1 U.S. Beach Bar. (A full listing of awards can be found on the bar’s website at florabama.com.)

Blake attributes the Flora-Bama’s success to another feature of the bar — the featured acts. Music has always been a cornerstone of its legendary, oft-misunderstood attraction. There is always a band, from morning to night and back again, and many artists who regularly play the bar have written songs for big stars. Today, the lineup strikes a balance between new artists and the musicians who helped build the place.

Stars not only get their hits from the Flora-Bama’s singer-songwriters, they also visit for “inspiration” of their own. Celebrities from Vince Vaughn to Kid Rock have dropped in for a Bushwhacker — the creamy Kahlua-based cocktail for which the bar is known — and they’re treated like anyone else.

“People come for the anonymity,” Blake says. “They stay for the experience. The Flora-Bama is not just somewhere to go, it’s something that stays with you. Who did you see? What did you write on the walls?”

With a great respect for the Flora-Bama’s storied history, the owners have plans for an even more colorful future. Besides an increased number of top notch musical acts, they plan to enhance food and bar operations at Flora-Bama Yacht Club; grow the selection at Flora-Bama Liquor & Lotto; and offer a diverse assortment of beach activities from volleyball and kayaking to jet skis and parasailing at Flora-Bama Watersports, with deep-sea and in-shore fishing, pontoon boat rentals and dolphin cruises at Flora-Bama Marina.

The simplicity of its formula is quite possibly the secret to its success. The owners chalk it up to their focus on the community and the people who visit. If they keep doing that right, they figure the business part will just work itself out.

“We have a deep appreciation for the community around us, with the eternal optimism that folks will always flock back to the place where fond memories will endure,” Price says. “There are few places left where you can be yourself and not be judged. At the Flora-Bama you can, and we aim to keep it that way.”