The Art of Living in Ruskin Place

Seaside neighborhood is a blended canvas

Unique places often fill the roles of characters in literature and films. Think New Orleans in “A Streetcar Named Desire” or New York City in “Sex and the City.” Ruskin Place, Seaside’s artist colony, played the part of a business district in the 1998 satirical comedy “The Truman Show,” filmed in the New Urban town.

In real life, Ruskin Place’s credits include a variety of starring roles: business district, residential neighborhood, vacation destination and event venue. With frequently divergent goals, this combination does not often profitably coexist outside of densely urban places, or shopping districts with traditions that have managed to survive from days gone by. In Seaside, the multiple shades of neighborhoods blend to create a vibrantly colored canvas that attracts residents, artists, businesses and visitors.

“It sets up a pretty interesting dynamic,” says David Bailey, Seaside town manager. Residents like the quiet aura of the neighborhood, the sense that it’s a shady spot away from the hustle and bustle of beach visitors, as well as the automobile traffic they generate. Gallery owners and artists like to host events, bring in live music and raise the retail profile of the district, driven by the widely accepted belief that Ruskin shops capture about 20 percent of the shoppers that visit Seaside’s downtown and beachside stores. Homeowners who rent their upper two stories to vacationers also weigh in. “It’s an interesting mix of combinations,” says Bailey.

Ruskin Place was intended to be the town’s “hardest working” neighborhood by design. Seaside founder Robert Davis recalls, “The original idea for Ruskin Place was for a workshop district with artisans living above ground floor workspace dedicated to woodworking, potting, metalwork, etc. The central space would be used to hawk the crafts to Sunday morning churchgoers. The Chapel, located beyond Ruskin Place, was designed to be a beacon, clearly visible from Central Square and drawing people back into Ruskin Place.”

Ruskin Place is geographically in the center of Seaside. According to Glenn Seawell — a Ruskin Place owner, full-time resident and the self-proclaimed mayor of the New Urban town — the neighborhood is a midpoint of the town, with about 40 acres on either side of it. A line from the Seaside Post Office flagpole to the town Chapel, which sits to the north, goes directly down the center of Ruskin Place, dividing the town into equal east and west areas.

From its inception, Ruskin Place was envisioned to be a little looser, a bit more creative than the town’s other neighborhoods. Twenty reinforced concrete townhouses, each three stories and some with rooftop terraces, were built one by one, each with its own character. The lots first went on sale in 1991, priced at $50,000 for end sites and $40,000 for interior ones. Parking is in the rear, accessed by alleys on either side of the neighborhood. Roof decks offer a view of the rooftops of Seaside, with the Gulf of Mexico in the distance. “My roof terrace was featured in the New York Times’ Homes Beautiful section in 1996,” Seawell said.

The three-level townhouses that comprise the Seaside neighborhood share an architectural design known as live/work. The ground floor was envisioned as a shop of some kind, and the two floors above are residential. The plan is based on the notion that shop owners could live above their workplace or studio. The ground floor entrance is level with the grade of the land, without steps, to encourage walk-in traffic.

For 22 years, he has leased the first-floor shop in his home to Annette Trujillo, owner of Newbill Collection by the Sea gallery. The entrance to the residence is tucked off to one side, with steps or an elevator to the top levels. “It’s very private,” he said. “I can come and go as needed.”

The center of Ruskin Place is filled with a landscaped park, an event stage and the sculpture-filled Fairy Park, where many a youngster has run among the twisted scrub oaks in pursuit of imaginary creatures, friends or siblings.

The park and stage were created with money “The Truman Show” producers paid for use of the district as a setting. “Much of ‘The Truman Show’ was filmed in Ruskin Place,” said Lori Leath Smith, Seaside’s director of public relations and marketing. “The homeowners have worked hard to beautify the district. With the living space on the upper floors, they have tried to landscape so that trees are what you see when you look out of the windows.” 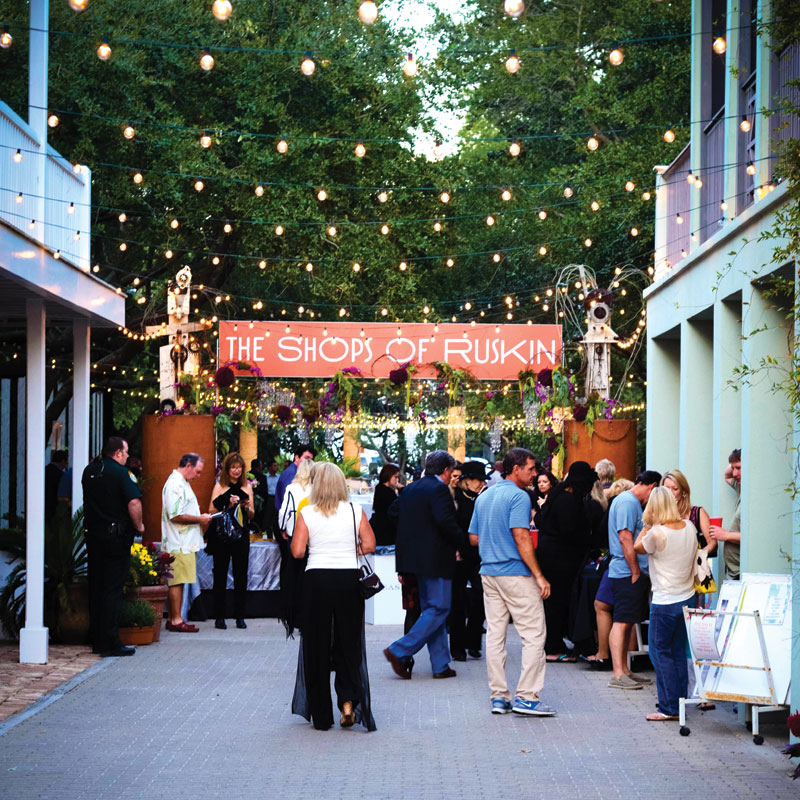 Part of Seawell’s portfolio as “mayor” and self-described “town character,” is to provide the Saturday music in Fairy Park. He opens his home’s second level doors to the balcony and broadcasts Chris Botti recordings from his sound system. If he forgets or is running a bit late, he is reminded by folks tossing pine cones at his window.

It was the neighborliness of Ruskin Place that first drew in gallery owners Michael and Laura Granberry some eight years ago. “We lived in Seagrove and used to ride our bikes through Ruskin Place,” Michael Granberry said. “The people there were always sitting outside, having parties. They invited us to stop and join them a few times. We became friends, learning the oral history of it. When the opportunity arose, we opened our art gallery there.”

With tongue firmly in cheek, he added, “We like to call it ‘The Shady Side of Seaside.’ ”

Granberry said most of the galleries expanded their offerings a bit during the recent economic downturn, adding in more gift items. The shops came to depend more on events such as the monthly First Friday Art Walks and live music to encourage people to wind their way back to the neighborhood. “We even had a margarita stand to raise money for the Artist Guild,” he said, referring to the organization formed to promote the artists.

The increase in retail activity spurred the artistic entrepreneurs to expand to Seaside’s Downtown district, opening a shop called Art Is Simple that offers creative gifts and fun antiques. Meanwhile, their Ruskin Place shop, Simple Designs, will return to its earlier concept, operating along the lines of a more traditional art gallery. The Granberrys plan to rotate exhibits of regional artisans and artists on a four- to six-week schedule, showcasing a broad definition of art with everything from sculpture to chocolate and leather.

A bit of pentimento from Ruskin Place’s film star past still fades through into its present day neighborhood canvas. Savvy visitors to the artist colony can spot a sign on one of the homes that reads, “Rubeo Architects.” No such architectural group exists. The sign is a prop left over from the neighborhood’s more youthful days on the big screen.