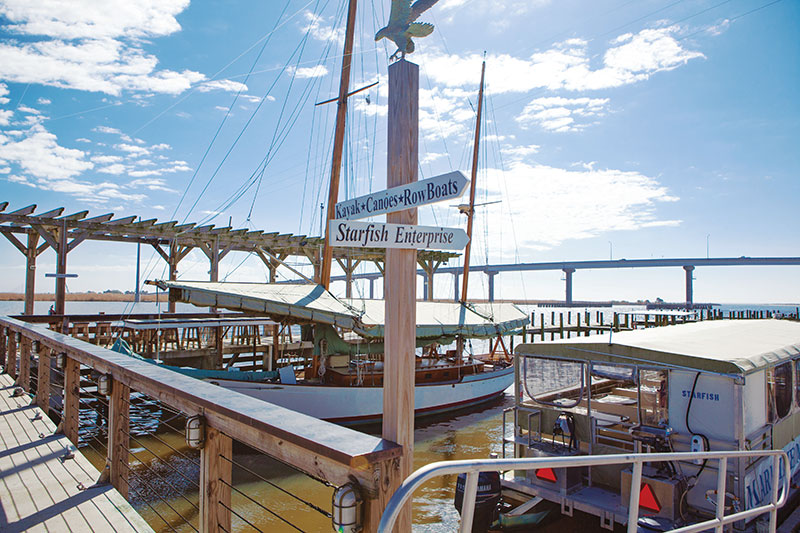 Once upon a time, the powerful splashing blades of elegant wooden steamboats churned the waters of the Apalachicola and Chattahoochee rivers. The steamboat era, so vital to early commerce, ran for a century from 1827 to 1927. But these weren’t the only boats that would have been familiar to the dockworkers and merchants in Apalachicola. Sleek sailing ships of various shapes and sizes, capable of carrying tons of precious cargo, plied the waters of the northern Gulf of Mexico and opened trade to far-off ports.

Today, thanks to the hard work and dedication of a small army of craftsmen, historians, machinists and other enthusiasts, the maritime heritage of this laid-back tourism destination is coming back strong. The Apalachicola Maritime Museum’s mission celebrates and preserves this rich history with regular sailing cruises in Apalachicola Bay aboard the aptly named Heritage, a 58-foot wooden ketch purchased by the museum in 2007; boatbuilding classes for young and old; ecotourism excursions; and ecosystem stewardship education throughout the Apalachicola-Chattahoochee-Flint River System.

The museum’s sailing program will be expanded to include the resumption of trips aboard the Heritage that will be open to the public and a sail training program based on the American Sailing Academy guidelines, said George Floyd, museum chairman. The Heritage can accommodate up to 20 passengers.

As important as that mission is, there is an ancillary benefit that local officials are counting on being just as successful. The hope is that the museum will continue to provide a much-needed long-term boost to the local economy. To date, more than 11,000 people have ventured along on the museum’s many educational excursions, and that number is expected to grow.

“Most recently, both (Franklin County and Apalachicola) have transitioned into major destinations for visitors,” said Curt Blair of the Franklin County Tourist Development Council. “The Apalachicola Maritime Museum is a cornerstone for the city’s tourism economic engine. For over 100 years, the county’s future has been connected to the maritime industry. The museum’s role in chronicling those transitions and laying a pathway to the future has been a critical element in the vibrancy of our economic evolution.”

Perhaps the most ambitious project to date for the owners and directors of the Apalachicola Maritime Museum is the renovation of the Jean Mary, an 86-foot-long replica paddlewheel boat that will “capture the beauty and romance” of the bygone era of steamboats. The boat was donated by legendary actress Debbie Reynolds, the vessel’s most recent former owner, after it sank in 2008. Reynolds gave the ship to the museum in hopes that it could be restored to its former splendor, according to Floyd.

“This magnificent vessel will soon be at her new home port at the Maritime Museum docks, where she will restore paddlewheel transportation to the area for the first time since the 1930s,” he said.

By September 2014, more than 90,000 man-hours of crew and volunteer time had been applied in this enormous endeavor. The vessel was launched on Nov. 4, 2014, and in January had paddled up the St. Johns River to a marina in Green Gove Springs, where it will undergo final renovations and sea trials.

The restoration funds come from a foundation Floyd established in 2007. The repair work exceeded $1.2 million in 2013, Floyd said, and delays from bad weather and illness hampered progress, but the plans remain the same.

“While way over and way beyond expected delivery time, we expect the wait will be worth it,” he said.

Once ready to go, plans call for the Jean Mary to make an 800-mile voyage to Apalachicola by a circuitous route around Florida’s peninsula. She will travel down the waterways of Florida’s east coast, cut across the state along the Okeechobee Waterway, paddle north along the west coast, then make an open-water transit from Tarpon Springs. Once docked at the museum in Apalachicola, it will be rechristened the Samuel Floyd. Samuel was a successful entrepreneur of maritime trade on the Apalachicola River in the 1840s and is George Floyd’s great-great-grandfather.

Once a part of the museum’s fleet, it will carry up to 12 passengers on short cruises around the local bays, rivers and barrier islands, including trips to St. Vincent, Little St. George and Ballast Cove on Dog Island, and other local points of interest. Longer cruises up to Columbus, Georgia, will also be offered that ought to give guests a taste of old-time steamboat travel.

“The restored paddlewheel boat is very exciting and will be a unique offering to those who want a true river experience,” said Franklin County Commissioner Pinki Jackel. “I’m looking forward to taking the trip and stepping back in time to when things were a lot more slow-paced.”

The Apalachicola Maritime Museum actually has two locations, one in Apalachicola and another set to open in the near future in the city of Chattahoochee. The Chattahoochee facility is still under development and is located just below the Lake Seminole dam where the Apalachicola River begins. Back in the mid-1800s, this particular property was a riverboat landing and comes with a 20-acre island below the railroad bridge. The site being developed now will feature a 120-acre campus with a museum, a renovated historic commercial building, riverboat remains, springs and a live music venue.

“This will become a port for the paddlewheel vessel and a launch point for downriver paddle excursions,” Floyd said, noting that it will be the perfect place for the protection and preservation of historical, environmental, ecological and archaeological treasures.

Row Your Own Boat

If you’ve ever wanted to try your hand at constructing your own wooden boat, the Apalachicola Maritime Museum now gives anyone the chance through its new wooden boat school, which teaches students how to build small vessels like a canoe, kayak, stand-up paddleboard or Passagemaker dinghy. In time, the school might also feature a wider spectrum of larger boat projects, such as commercial fishing boats and paddlewheelers like the ones of the 19th century. There’s also the possibility that high-end yacht building and renovation work can be done in Apalachicola in the future. 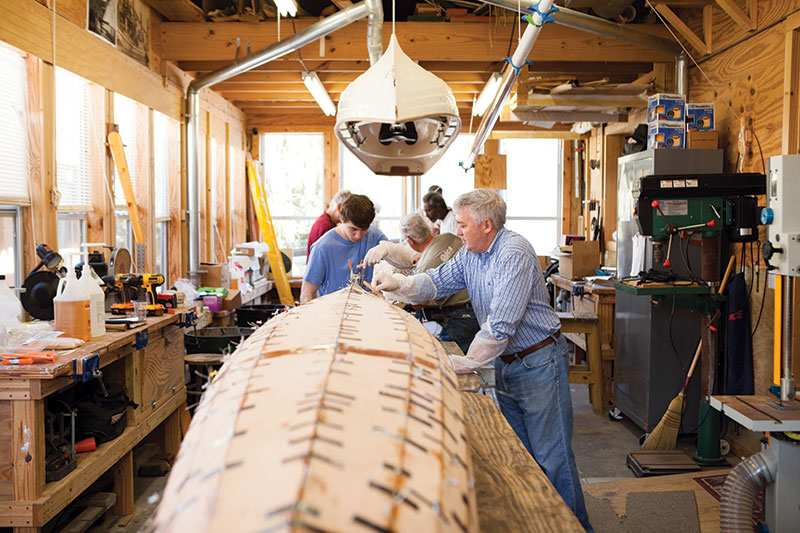 Members of a boat-building class learn the time-honored skills and techniques used by their forefathers to build sea-going vessels.

Jackel, the Franklin County commissioner, is an enthusiastic supporter of the museum’s mission and the vital role it’s playing in the local economy.

“The Maritime Museum focuses on the historic and current role boating, boat design and the commerce of the Apalachicola River played in the community and economy of Franklin County,” she said. “The setting and the facility is an incredible tribute to life years ago on the water and to the art of boat crafting. Though it is a museum, the art of boat making and classic boat construction is alive and well, but only in a few locations in the world. So, from that standpoint, as a commissioner I would love to see this enterprise continue to grow and thrive, because it is bringing much-needed jobs to Franklin County.”

Overall, the museum’s projects and vision are what Jackel describes as “Franklin County-friendly.”

“It means treasuring our natural environment, understanding the rich tradition of the river and the bay and the very important role it continues to play in our community,” she said. “These are great opportunities for folks to experience history firsthand in a very fun way. Imagine floating along the great river, on a luxurious paddlewheel boat, music playing and a tall glass of sweet iced tea. Well, it just doesn’t get any better than that in the South.”