Inside Look at Tallahassee’s Startup Ecosystem

With startups blossoming, investment capital has catching up to do

There has been a lot of focus in recent years on growing Tallahassee’s startup ecosystem. Accelerators, incubators and pitch competitions have proliferated. Now, as the country lurches out of a suffocating pandemic, the city may be approaching a turning point where years of patient effort will produce a gush of innovation and growth. However, even as resources expand and the pandemic subsides, experts say one crucial ingredient — money — remains scarce.

Rick Kearney puts it succinctly: “Tallahassee is an investment desert,” he said.

Probably few folks understand the plight of local entrepreneurs as well as Kearney. Mainline Information Systems, the company he founded in 1989, became one of the top IT firms in the state and remains one of the capital region’s brightest success stories. He has been showered with awards recognizing his philanthropy and business acumen and once made the cover of Inc. magazine.

Through all these successes, he’s remained loyal to his hometown, and he believes it has the potential to spawn many more success stories. Before that can happen, though, something must be done to bridge the capital divide.

Investors do exist in North Florida, but they are few; deal sizes tend to be small; and the nature of the opportunities they seek doesn’t always conform to the typical tech startup.

Robert Blacklidge knows this firsthand. The self-described “serial entrepreneur” recently became the director of entrepreneurship at Domi Station, an organization that provides education and mentorship to local startups. Before coming to Tallahassee, Blacklidge worked in Tampa and Lakeland, where he helped to grow the startup ecosystem as a community organizer.

Before the pandemic, Blacklidge was raising money for his own startup, CourseAlign, which was focused on educational software. That experience taught him that the technology sector in Florida had a lot to learn from other markets — and inspired much of his community organizing.

“It’s two sides of the same coin,” Blacklidge said. “You have to have companies that are investable, but you also have to have investors who are educated about how to bet intelligently on tech startups.”

Neither of these prerequisites are a given — particularly in smaller markets like Tallahassee. This is due, at least in part, to the nature of the wealth that exists there.

“A lot of the wealth in Florida is real estate based,” Blacklidge said. “Tech and real estate are completely different animals. Tech startups are a high-risk gamble. You’re going to lose nine out of 10 times.”

That’s why investors in larger markets tend to specialize and hedge their bets by investing in numerous companies in the same niche.

“That gives you a unique capability at scale,” Blacklidge said. “As some of those companies die off, you can roll that talent and technology into the surviving companies. In Florida, that’s not always the case. You’ll see groups invest in 10 different companies in 10 different industries.”

This is starting to change, Blacklidge said. As the startup ecosystem matures, more and more investors are banding together to form syndicates or co-ops of high-net-worth individuals who invest their resources together and share the cost of due diligence and portfolio management.

“There are family investors and smaller groups here,” Kearney said. “You can go visit them in the pine trees and do a deal, but you have to know who they are and where they are. It’s very quiet, patient money.”

One of these groups, Prescient Capital Ventures, has been quietly investing in startups since 2009. Prescient is headed by Thom Park, an investment advisor who once coached college football at The Citadel, and Bruce Thomas, a successful car dealer and real estate entrepreneur.

Park and Thomas have built a network of 120 to 130 investors over the last decade. About half reside in North Florida.

“Many people are interested in investing in early stage companies,” Thomas said, “but they don’t know where to find them. You can’t just find an ad in a newspaper or on television.”

Thomas said the group probably meets with about 30 companies each year. Of these, they invest in maybe one, with deal sizes ranging from a few hundred thousand to a few million dollars. Thomas said they’d only invested in two local companies during Prescient’s 12-year history. This is due, at least in part, to the quality of startups they’ve seen. 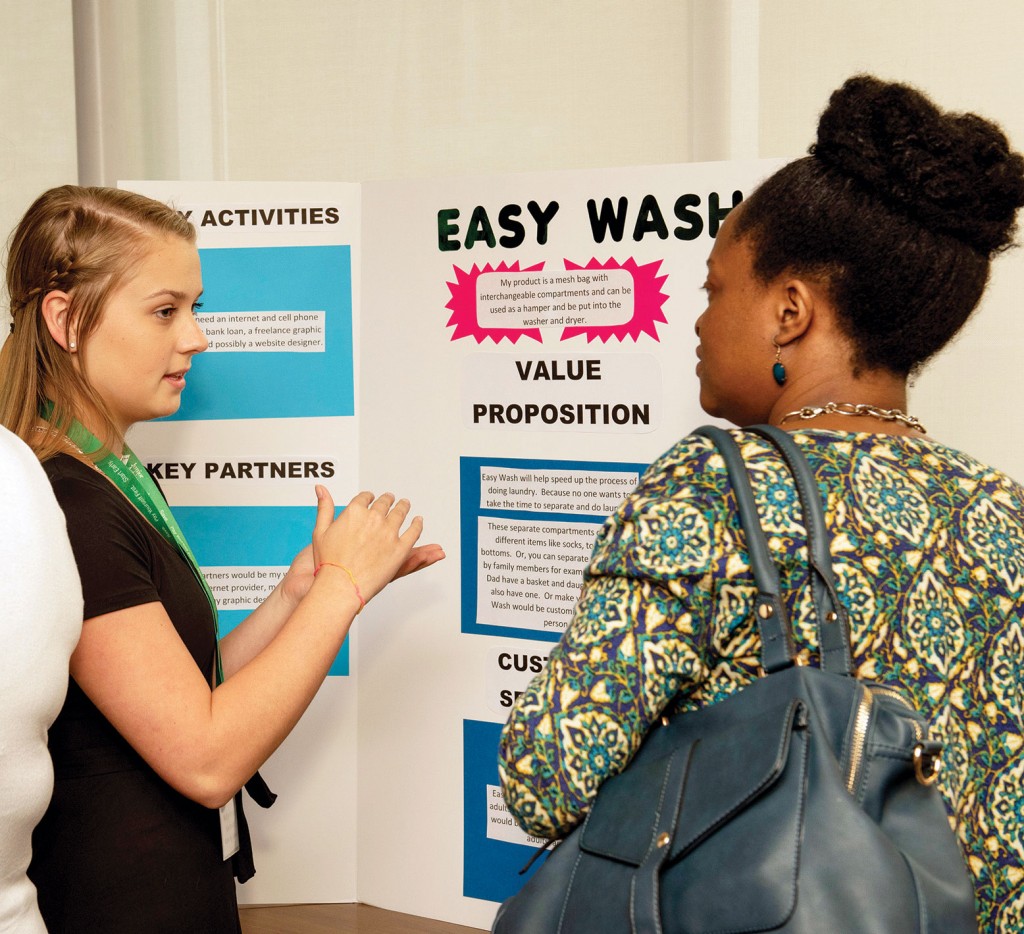 Participants in a Junior Achievement Shark Bowl competition gain valuable experience by preparing presentations and making pitches to judges. For future entrepreneurs and capital investors, Junior Achievement can be a formative influence as it was for Ron Miller, the executive director at Tallahassee’s Innovation Park. Photo courtesy of Junior League Big Bend

“Being in a university town, we have a lot of professors and students who have ideas and want to monetize them,” Thomas said. “A lot of them think that, if they bring in a million-dollar investment, their idea will just work. We bring them down to earth, but we try to do so gently.”

Thomas said Prescient did not have a particular industry focus.

“The business just has to make sense to us,” he said. He added that a founder with skin in the game was a prerequisite.

“We look at the leadership of the company and what they’ve done,” Thomas said. “In most cases, the founder has invested some of their own money or devoted a lot of time. That’s inspiring. We pay attention to that.”

While groups like Prescient provide some runway for a select group of startups, Kearney said there remained a big disconnect between the kind of early stage, small-scale investments these groups make and the large-scale capital needed to bring those ideas to market.

A Role for the University

Kearney believes the state university system could be the region’s greatest asset in scaling the innovation economy — both by bringing academic research into the private sector and by helping entrepreneurs access the capital needed to bring those technologies to market.

“With the College of Medicine at Florida State University, as well as their chemistry department, we have a very high potential in pharma, chemicals and drugs,” Kearney said. “A lot could also be done in the energy, aerospace and transportation sectors in conjunction with FSU’s MagLab.”

Kearney said local universities — in addition to producing innovations and transferring them to the private sector — could prove crucial in soliciting the capital needed to take them to market.

“I think improving the capital landscape is a huge area of opportunity,” he said. “The universities really could become marketplaces for innovation.”

In other parts of the country, alumni networks act as a kind of connective tissue that brings together academia, venture capital and private equity.

“If you were just to look at people who went to school here or had careers here, the wealth exists,” Kearney said. “The problem is that the people who are in the investment industry don’t reside here. They are the missing connectors. Universities could help plug this gap, because they have the credibility, but there has to be a greater commitment.”

Domi’s Blacklidge, though, remains optimistic. Having worked closely with startups in other parts of the state, he said Tallahassee was ahead of the curve in many ways.

“We have an organized effort through several different partners to prepare entrepreneurs and connect them to mentorship,” he said.

He added that the pandemic, for all the chaos and tragedy it has produced, had also helped to dissolve some of the barriers to fundraising that had long hobbled startups in smaller markets.

As investors are forced to digitize their processes, they are also democratizing them. Hopping on a Zoom call is a lot more accessible than hopping a plane, and Blacklidge said he hoped the shifting landscape would favor good ideas, no matter where they originated.

“With the pandemic, the geographic barriers to raising money that existed before have dissolved,” he said.

Likewise, Blacklidge said the last year had brought an explosion of innovation.

“We went from seven or eight participants in our program to 44 in the last six months,” he said. Some of these founders turned to entrepreneurship after losing their day jobs. For others, a year of instability and change had simply rendered the risks of entrepreneurship less imposing.

Regardless, Blacklidge said he was optimistic about the future of Tallahassee’s startup community.

“I think we are at a catalytic moment,” he said. λ