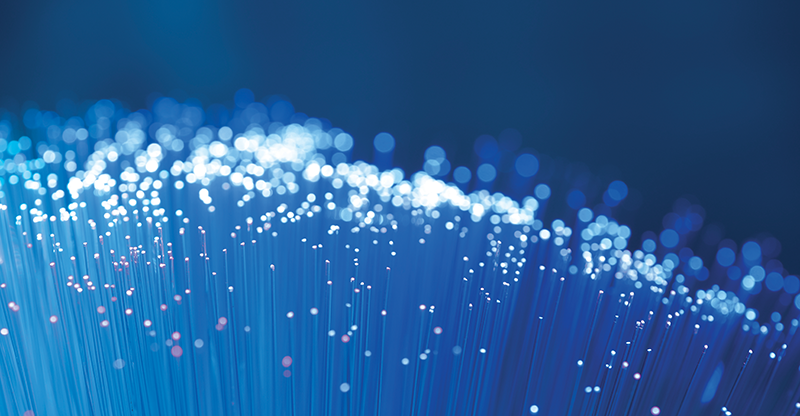 In the world of computer communication, conventional broadband Internet is what most of us use or have access to on a regular basis. For the most part, its speed and capacity are adequate to conduct business both at work and at home. But what if you need to move millions of files all at once with lightning speed and high security? That’s where LambdaRail comes into play.

LambdaRail is powerful stuff. It’s high-tech broadband that can transmit the data equivalent of 80 million text-filled file cabinets daily. It can simultaneously download an e-book for every one of Florida’s 2.7 million grade-school kids in about two minutes. It outsmarts smartphone data transmission by 50,000 times. If it were a highway, it would be 32 lanes wide and the regular Internet would be a two-lane road.

Wow, that sounds great, you say. Hook me up, you say. There’s just one catch. LambdaRail isn’t your typical information superhighway. Nor is it available to your average Internet user. LambdaRail is for big-league data movers, crunchers and shakers: universities, high-tech research centers and medical centers.

Florida LambdaRail, or FLR for short, was established in 2004 and is a consortium of public and private universities needing a mega-capacity, ultra-reliable and high-speed data network able to handle the unique transmission needs of research communities. LambdaRail doesn’t sell commercial service. It’s a public-private partnership that works solely in the nonprofit sector. If you want to be on the network, you have to show the organization that your institution has a nonprofit mission. FLR is owned and operated on behalf of 12 Florida research institutions, including Florida State University in Tallahassee and the University of West Florida in Pensacola.

LambdaRail is powerful stuff. It’s high-tech broadband that can transmit the data equivalent of 80 million text-filled file cabinets daily. It can simultaneously download an e-book for every one of Florida’s 2.7 million grade-school kids in about two minutes. It outsmarts smartphone data transmission by 50,000 times. If it were a highway, it would be 32 lanes wide and the regular Internet would be a two-lane road.

There are also “affiliates” that have access to FLR through their association with the main equity partners. In Northwest Florida, these include Bay District Schools, the Escambia County School District, Florida A&M University, Gulf Coast State College, Pensacola State College and Tallahassee Memorial HealthCare.

In Bay County, economic development leaders are taking steps to ensure that the entire county is “looped” by the network. The Bay County Economic Development Alliance is working diligently on this project through the Bay Tech Initiative, according to Scarlett Phaneuf, vice president of the alliance.

“Broadband access is fairly readily available in Bay County, but we identified a need for something even more secure and at higher speed,” she said. “The EDA was tasked with commissioning a study, and we hired a consultant to do that. We completed that process along with stakeholder input, and we have continued the charge since then to identify funding in order to bring the infrastructure down into Bay County and provide that for our military installations and our community college and hospital.”

Essentially, officials want to extend the fiber optic line carrying the service from the vicinity of Bruce (near the intersection of State Road 81 and State Road 20) down State Road 79, then southeast along U.S. Highway 98 to Naval Support Activity Panama City, and thence to Tyndall Air Force Base. Phaneuf said that, ideally, they’d like to bring it back up State Road 77 and link up to Northwest Florida Beaches International Airport. Connection points would be made available to West Bay, Gulf Coast State College, Bay District schools, hospitals and the city of Panama City.

The project carries a $1.7 million price tag; to date, the EDA received a $500,000 grant from the Florida Defense Support Task Force. They’ve also asked for $1 million from the RESTORE fund of Bay County in an attempt to boost economic development.

“We have a growing cluster of technology companies located in downtown Panama City that need access to this type of infrastructure, so we are definitely hoping it will help support that and help us to recruit similar companies that need this type of infrastructure,” Phaneuf said. “It’s really critical in the technology sector, and it’s vital to our ability to grow that sector of our economy.”

Bay County is just one example of Northwest Florida counties reaching for LambdaRail technology, according to David Mann, spokesman for Florida LambdaRail in Tallahassee.

“Bay County is an interesting example where there is a hub of activity going on, especially with the FSU campus as well as Gulf Coast State College and the public school district,” Mann said. “The three of them are joined up, and I do know there is a good deal of interest. The chamber of commerce there has been talking about creating a proposal for economic development. Escambia has been pretty active, too. The University of West Florida is one of our owners, as is FSU, so they are the main anchor institutions in this area. In Escambia, the school district recently joined as affiliate members. Two of our five K-12s are in the 850 area code.”

Meanwhile, Pensacola State College is on the network, and the chamber of commerce there has previously received a grant for making those connections, Mann said.

“They created a local loop out of their money, an Internet ring if you will, and that’s being managed by Pensacola State College,” he said. “Its intention is to connect up the hospitals, and to provide a mechanism for the military installations to hook up. We have a direct connection to that Pensacola ring, and any folks who want to avail themselves of that can do so.”

The Okaloosa County Economic Development Council has also jumped on the LambdaRail bandwagon. The EDC formed a partnership with Okaloosa County, the University of West Florida and the state to provide Florida LambdaRail to educational and research facilities — as well as Eglin Air Force Base. Together, these organizations form the Emerald Coast Advanced Research Network team, tasked with formulating a plan and timeline for connecting Eglin and Fort Walton Beach.

The entire FLR network consists of 1,540 miles of fiber and recently completed an upgrade enabling data to travel at 100 gigabits per second. Mann said that only two other regional networks, in California and Ohio, have completed such a systemwide upgrade.