Crestview just got its “sea legs.” 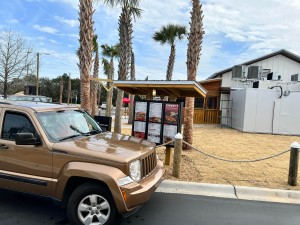 Like its sister locations, the restaurant is painted a crisp white with cheery red trim. It is wrapped with a rustic deck and topped with a silvery metal roof. Stewby’s is a casual, walk-up seafood joint — fried shrimp “samwiches” is menu specialty. If you are looking for fancy finishes, you won’t find them here, but you will find a clean and welcoming spot — with fresh seafood at an affordable price.

The restaurant seats about 100. That’s nearly double the size of the original location, which means 35 to 40 new local jobs.

The original Stewby’s opened in 2011 on Racetrack Road in Wright and the second restaurant along with a Stewby’s Steamer & Market opened at 235 Santa Rosa Blvd. on Okaloosa Island in Fort Walton Beach. 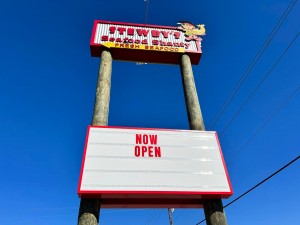 The restaurant is modeled after a former family restaurant called Sam’s Oyster House, established in the 1960s by local Sam Taylor, which was originally located in Fort Walton Beach at the foot of the Brooks Bridge under large live oak trees (where the Paradise Shopping Center is now).

At the time, it was the “go-to” seafood restaurant in town for locals and visitors alike.

You could argue that Sam’s paved the way for most of the seafood restaurants in Fort Walton and Destin today. “Most are modeled after Sam’s casual atmosphere and menu, however, these restaurants don’t have what I have, and that is my father’s vision — and most importantly his recipes,” Stewart Taylor said.

In a social media post last week Taylor said, “Our first week in Crestview and the response from the locals has been very welcoming. We’ve had a few hiccups, but overall things have been very smooth. The new crew is learning fast and doing a fantastic job. Ticket times are averaging 10 minutes and traffic issues are almost nonexistent.”

Stewby’s is a casual, takeout and dine-in seafood restaurant concept that offers affordable, local seafood. This continues the tradition set by Taylor’s father, Sam. The Crestview location is open 10 a.m. to 8:30 p.m. Sunday through Thursday and 10 a.m. to 9:30 p.m. Friday and Saturday. It has a drive-through and is offering delivery via delivery.com. You can also order online.

Ahead of the Storm