St. George Island Marina Gets Brought Back to Life

Years have passed since recreational and commercial boaters used the little harbor near the causeway connecting St. George Island to the mainland, yet today it’s undergoing a renovation that could make it once again an important part of the local economy.

“It’s a beautiful piece of property, and we’re just getting started trying out what all we can do with it. The harbor is the main thing,” said George K. Floyd, founder of the Apalachicola Maritime Museum.

The property in question is a wooded, 26-acre waterfront parcel that runs from the causeway down to the Fourth Street canal. Floyd bought the land in 2013 with an eye toward it becoming an adjunct facility for the maritime museum. Since then, work crews have steadily cleared away years of tangled underbrush growth. During this time, Floyd also received approval from the Florida Department of Environmental Protection to get started on the actual harbor and channel maintenance project, which began in September. Years of accumulated sediment, most of it brought on by Hurricane Dennis in 2005, will be removed to make the channel and harbor deep enough for deep draft vessels to seek shelter in times of emergency.

For the most part, though, Floyd sees the harbor as another educational venue for teaching boat building and sailing, and possibly much more. One idea being bounced around calls for informational kiosks on site to introduce visitors and tourists to local seafood. Another idea he has involves using the harbor as a port of call for the Jean Mary, the paddlewheel riverboat he has been laboring three years to bring to the area. The rest of the property might see some kind of low-density development, such as an inn or a set of cottages. Nothing is set in stone yet. 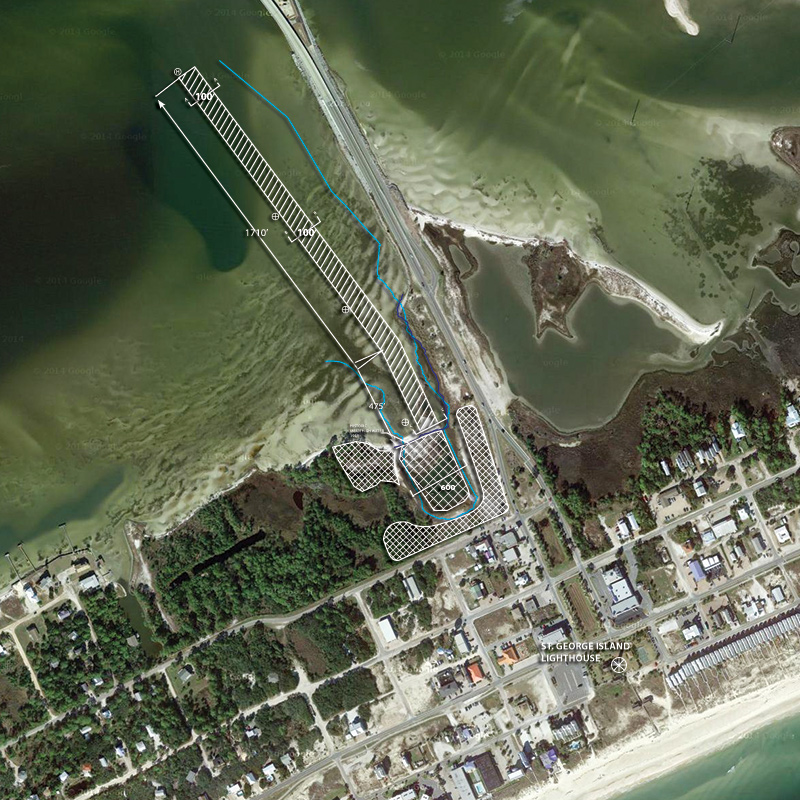 “We’re looking for viable options for the rest of the property. We’d like to put together an advisory board to come up with the best economic impact,” Floyd said.

Longtime St. George Island Realtor Alice Collins is excited about the project. She was the listing agent for the property and convinced Floyd to buy it because she knew he would have the right vision for it.

“I thought it would be natural for him and what he was doing with the Apalachicola Maritime Museum and the paddlewheel boat,” she said. “It would bring people in that way we wouldn’t do otherwise. I felt comfortable he would do the right thing with the property. I think it’s wonderful that somebody is moving ahead to opening the channel back up and turning it into something we’ll all be proud of. George has a real vision, and the idea of bringing a paddlewheeler in here is incredible.”

The St. George Island ferryboat basin was developed in the 1950s to support ferry service of vehicles and passengers to and from the island. Franklin County voted 1,120 to 34 in 1951 to build a bridge to St. George Island to advance its use as a vacation destination. In 1952, the county commission worked with the Florida Department of Transportation to set up a ferryboat service to the island, and a year later the county bought two ferryboats that had originally been slated for service on the Hudson River in New York. As the ferry service slackened, the boat basin became a popular anchorage for commercial seafood harvesters and recreational boats, too. A 1984 aerial photograph shows some 30 boats docked there in the offseason, Floyd said. The ferry service came to an end in the early 1990s.

John C. Solomon, executive director of the Apalachicola Bay Chamber of Commerce, grew up on the island and remembers being able to use the little harbor, which could be a boon to the economy once restored.

“I think it would be beneficial to the whole area,” he said. “I remember when that place was actually where you could get boats in and out of it, and it was very useful to have boats going in and out of that port. Now you have to have a small boat, but you can still get through it.”

“We share the general thoughts that the county needs to look back to its maritime history. St. George Island has an interesting history, and to bring some sort of maritime activity back needs to happen,” he said. “This county’s economy can grow its maritime interests. I’m excited about what (the harbor renovation) is going to do to attract people to St. George Island. We still have a vibrant seafood industry here. We need to tie the local economies together with the maritime heritage. What George is doing is a real step in that direction.”

Collins said she’s certain any plans for the rest of the property will make a “real statement” for the island, as long as it’s not a high-density development. That’s something islanders wouldn’t want, she said.

“There are so many different ways it can be utilized, and it’s difficult at this point to know how it’s going to shake out. But I don’t see him doing heavy-density stuff there. I think it will be a development that people will be proud of. There are a lot of really neat, low-impact/low-density things that could be done there,” she said. “I think the island is fortunate that George has it because of what he envisions for it, and he is really following through. His father wanted to do a maritime museum in this area, and that’s what George is determined to do — and much more than that, a connection with the maritime history. There’s a lot out there that can be a real economic boost for our area.”