Determining the direction the county should take to create more jobs

Quality of life is a pivotal consideration for people when they choose where to reside. And it accounts for Santa Rosa County’s status as one of the fastest growing counties in Florida, the fourth fastest growing state in the country.

Santa Rosa County is a primarily rural area with two state parks and ample outdoor recreation opportunities. Located between Florida’s western-most county, Escambia, and military-focused Okaloosa County to the east, it is where many who work in Pensacola and Fort Walton Beach and at Hurlburt Field and Eglin Air Force Base reside.

The reasons are clear. Santa Rosa County is home to highly rated schools and two college campuses. It is rich in affordable housing, both single- and multi-family, in the country and on the water. It has a robust and varied retail sector and plenty of dining options.

No sector of the county’s economy exceeds more than 20 percent of the total. Both private- and public-sector employment are key components. The county is home to unique high-tech businesses including AppRiver, a supplier of electronic communication and cybersecurity solutions, and Avalex, which produces special aviation mission equipment.

The U.S. Navy trains pilots in Santa Rosa County, and the Andrews Institute for Orthopaedics and Sports Medicine, favored by the world’s top athletes, is in Gulf Breeze.

And, the county is looking for more.

Last year, the Santa Rosa Economic Development Office hired a consultant to help it determine the direction the county should take to create more jobs so that residents who commute to jobs in neighboring counties will have options enabling them to work closer to home.

“We’re growing at a rapid pace, nearly 2 percent annually,” said Shannon Ogletree, executive director of Santa Rosa Economic Development. “People are starting to think of the county as a location of choice.”

He said the push is on to supply the amenities and jobs required “so people can be employed here.”

A part of that effort is education. Santa Rosa Career Pathways provides information to help students choose studies that align with their desired careers and available and anticipated jobs. Santa Rosa County’s Career Academies provide skills needed to compete in a global economy in fields ranging from information technology and cybersecurity to aviation, health care and more.

Santa Rosa County, in terms of growth rate, is in the top 5 percent of counties in the United States. Part of the Pensacola-Ferry Pass-Brent Metropolitan Statistical Area, it is 1,011.61 square miles in size. Its population in 2016 was estimated at 170,497, an increase of 27,514 over the previous 10 years. That growth was more than double that of the Pensacola metro area.

Santa Rosa County attracted 17,688 people, or 10.5 percent of the total population in 2016. Sixty-three percent of these residents have some college or a post-secondary degree.

Santa Rosa has gained more new residents as a percentage of its total population than Baldwin County, Alabama; Beaufort County, South Carolina; the Pensacola metro area, the state of Florida, and the United States as a whole.

The largest city is the county seat of Milton, a former lumber town incorporated in 1844 and one of the oldest in Florida with a 2016 population of 9,839. Milton, home of Naval Air Station Whiting Field, is located inland, north of East Bay on the Blackwater River.

The city of Gulf Breeze, which sits on the western edge of the Fairpoint Peninsula between Pensacola and Pensacola Beach, had a 2016 population of 6,466. Linked to larger Pensacola via a three-mile bridge, it’s one of the most affluent communities in Santa Rosa County. On the north side of the county, the only incorporated town is Jay, which in 2016 had 590 people.

Two of the hottest growth centers are not incorporated towns, but Census Designated Places (CDP), a term used by the U.S. Census Bureau for population concentrations.

In addition to Navarre, another hot growth center is Pace, to the west of Milton, with a population of 21,997.

The county has a labor force of about 75,000 people and more than 220,000 people in the workforce live within a 45-minute drive of its industrial parks, according to Ogletree.

The Santa Rosa Economic Development website reflects that the largest employers in the county are state and local governments, with more than 4,000 workers, followed by the federal government and military, with more than 3,000. The next highest is Walmart, the county’s largest private employer, with nearly 1,300 workers.

The health care industry is also a big employer. Baptist Health Care Systems has over 600 workers and Santa Rosa Medical Center has nearly 500. Add health care consultant The Studer Group’s 166 workers, the Andrews Institute’s 150 and Lifeguard Ambulance Service’s 130 and it is clear health care is a major part of the county’s economy.

The county’s neighbor to the north is Escambia County, Alabama, which had a median household income of $32,330.

There are 18 Santa Rosa County population centers with median incomes higher than the county as a whole. The incorporated city with the highest median household income was 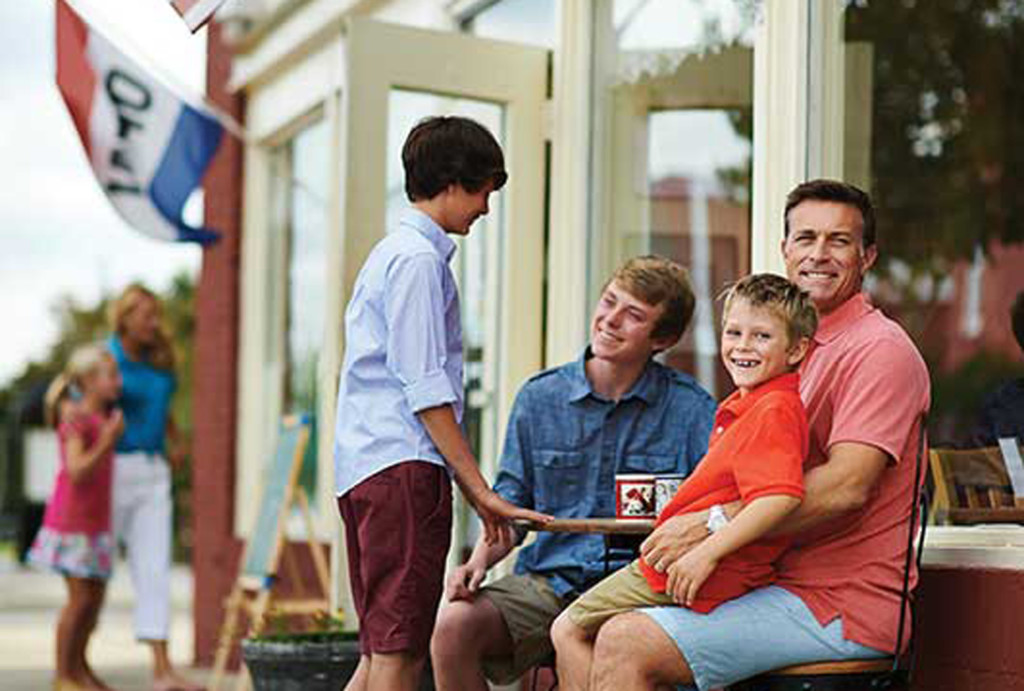 Santa Rosa County’s median residential property value is $161,400, according to Data USA’s 2015 figures. One city, Gulf Breeze, and 13 unincorporated places had property values higher than the county’s median. A diversity of lifestyles leads to a wide difference in home values.

But, within each of those CDPs, there are high-cost and lower-cost options impacting the median property value. According to Data USA, the largest share of households pays property taxes in the $800 to $1,500 range. The homeownership rate is 72.6 percent.

The county has a relatively low cost of living compared to neighboring areas and the national average.

According to Sperling’s Best Places, where a cost-of-living index of 100 represents the U.S. average, Santa Rosa County’s index is 96.10, owing to relatively low housing costs.

Residents do a lot of commuting. On average, employees in Santa Rosa County have a longer commute time (26.3 minutes) versus a national average of 24.8 minutes.

In addition, 2.13 percent of the workforce has “super commutes” in excess of 90 minutes, according to Data USA.

If you ask residents to name the most familiar landmark in the county, chances are good they will point to Naval Air Station Whiting Field, one of the Navy’s two primary flight training bases.

Established in 1943, the 12,000-acre complex provides training for the Navy, Marine Corps, Coast Guard and Air Force and for allied nations.

The county also has outlying fields used for training: NOLF Choctaw and Holley, both in Navarre, and Spencer in Pace.

NAS Whiting Field is the busiest air station in the world, accounting for nearly 1.5 million annual flight operations including primary flight training of more than 1,200 students.

Santa Rosa County and Whiting Field are in the middle of a heavily militarized area. To the west is Naval Air Station Pensacola, the so-called “Cradle of Naval Aviation,” and to the east is Hurlburt Field, home of the Air Force Special Operations Command, and Eglin Air Force Base, one of the largest bases in the nation and the place where the Air Force develops aerial weapons. It’s also home to the F-35 integrated training center.

All that military activity not only has an impact on the economy, but leads to future residents. Many of the military personnel, once they retire, wind up living in Santa Rosa County and other counties in the region.

The county has 204 defense contractors, that is, businesses who have won contracts to do work for the military; those contracts call for defense products or for services as common as lawn care. 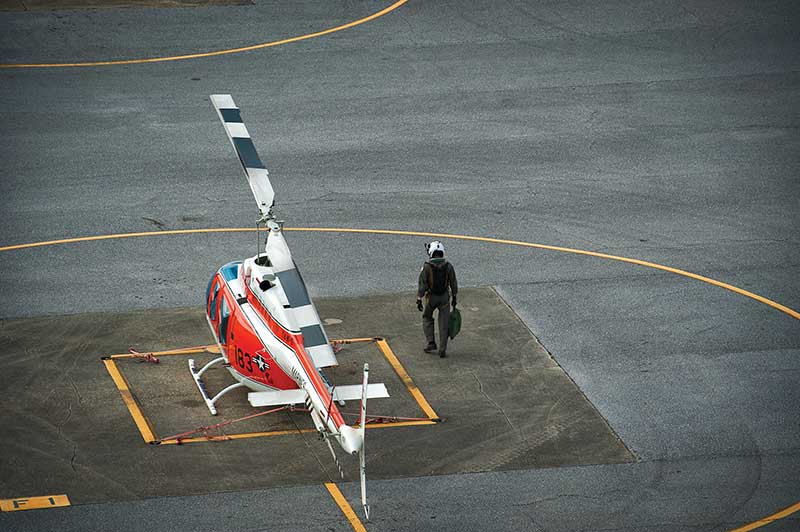 For any company, whether it’s one already in the county or one that might be considering the county for an office or plant, the quality of the workforce and area schools is important.

The four-year graduation rate for Santa Rosa County’s class of 2016 was 85.7 percent, exceeding the rate for Florida or the United States.

The area surrounding Santa Rosa County has 13 colleges offering certificates and degrees up to the doctorate level.

Figures from the Census Bureau show 90.2 percent of residents in Santa Rosa County are high school graduates; 26.9 percent have one or more college degrees and 18.6 percent are veterans.

Santa Rosa County has the highest concentration of former members of the military in the nation with over 35,000 in “325” zip codes, according to Ogletree.

In today’s competitive workplace, cutting-edge and relevant career and technical education is a smart investment. Santa Rosa County’s Career Academies prepare students for college and careers by providing them with the skills needed to compete in a global economy.

It won a gold Excellence in Economic Development Award for its 2017 Aviation Industry Brochure project.

The county has three certified sites. A site that is certified through a program conducted by Gulf Power is deemed shovel-ready. Certification helps eliminate risk when a company is looking for property. Archeological studies, an examination of topography and title searches help ensure that properties are appropriate for development.

It’s also part of the much broader Gulf Coast aerospace corridor, which spans the area between Southeast Louisiana and Northwest Florida and includes a diverse range of aerospace activities, from space to aircraft construction.

One project the county is developing is Whiting Aviation Park adjacent to NAS Whiting Field. A key amenity is that tenants may use the runways at the Navy base. Ogletree said the county is seeking Triumph Gulf Coast funds — designed to mitigate losses from the 2010 Deepwater Horizon/BP oil spill — for the project.

Signs are good in the county. Boat builder Fabbro Marine recently expanded, doubling its plant in Milton to more than 75,000 square feet in size. In Gulf Breeze, Avalex has added employees, and so has Gulf Cable in the industrial park near Milton. Another new development is Pace Crossroads, a new retail center. Dick’s Sporting Goods is an anchor tenant.

David Tortorano is a writer with the Gulf Coast Reporters League. His story was commissioned by the Santa Rosa Economic Development Office.