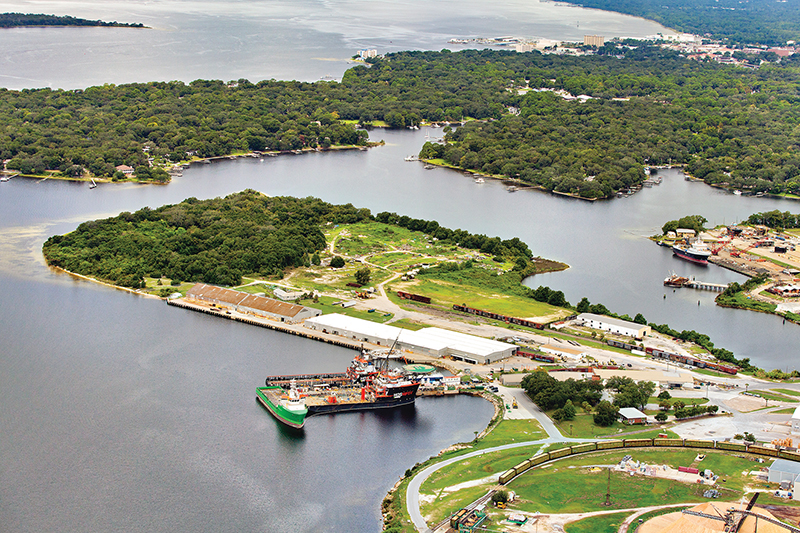 The addition of a forest products terminal at Port Panama City is projected to create 63 jobs. The project will include construction of a 250,000-square-foot warehouse.

Two ports are better than one in Bay County. Today, Port Panama City is doubling down on its capacity with the recent purchase and upcoming development of a modern “forest products” terminal on a nearby 41-acre industrial waterfront tract formerly owned by WestRock.

The port acquired the mostly vacant land on May 3 from the company, which operates a corrugated packaging mill on adjoining property. More to the point, the deal comes with a 920-foot ship berth and 160,000 square feet of warehouse space.

Plans call for development of a state-of-the-industry forest products terminal, including the construction of a new, 250,000-square-foot warehouse for wood pulp, kraft linerboard and other goods. The terminal will also feature a 48-car-capacity rail yard, a renovated berthing area with a 38-foot draft and reinforced bulkhead, and a 10-acre storage area, according to port director Wayne Stubbs.

“This is a huge step forward in enhancing Port Panama City’s already impressive abilities to handle forest product cargos,” Stubbs said. “Exports of paper and wood pellets helped propel Port Panama City to a record year in 2015, with more than 2 million tons of cargo moving across our docks. This acquisition and terminal project position our port to handle sustained growth for many years to come.”

Port Panama City bought the 41 acres for $13.6 million. The deal was financed through the Florida Department of Transportation’s State Infrastructure Bank, and the port has secured an option to buy an additional 27 acres for another $6 million.

Stubbs estimated that the expansion will provide an economic benefit of more than $125 million annually and bring in 63 direct jobs and another 130 indirect jobs. The project is expected to almost double the working acreage of the port.

The port has the support of a $4.25 million Florida Department of Transportation grant and is proceeding with $12 million of first-phase terminal projects. An additional $9 million, half from FDOT, is earmarked for bulkhead work and rail and roadway improvements.

Meanwhile, a $10 million effort to deepen the channel from 32 to 38 feet has received approval from the U.S. Army Corps of Engineers. Half of the money is federally funded, and the work is expected to be complete in 2018.

Grieg Star Shipping, a longtime shipper of forest products via Port Panama City, is enthusiastic about the developments.

“We at Grieg Star are very excited about the port’s investment in a breakbulk forest-products terminal and the necessary dredging to help fulfill its potential,” said Andy Powell, Atlanta-based vice president and general manager of Grieg Star Shipping. “We know that this has been a lot of work for Wayne and his team to bring things to this point and really applaud their efforts.”