Paso Fino Ranch in Madison is The Home of Equestrian Champions

The Mercedes of Horses 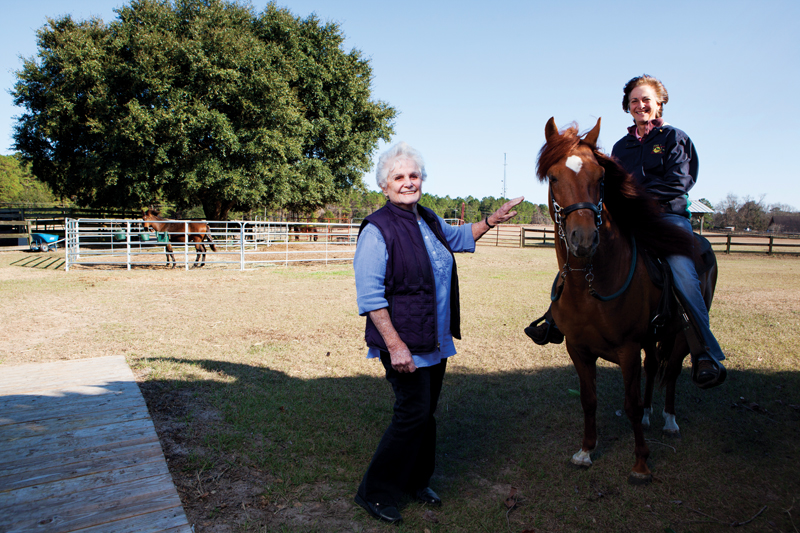 Henrietta and Robin Ratliff at their Greener Pastures Ranch in Madison County.

The innumerable photos, plaques, ribbons and other awards covering the walls of the office in the main barn of Greener Pastures Ranch in Madison County represent but a fraction of this outfit’s winnings — both by its horses and its mother-daughter founders. Indeed, in the world of Paso Finos, or fine-gaited horses, Henrietta and Robin Ratliff and their Sin Par (without equal) stable of horses are nationally and internationally recognized.

Going back nearly 50 years to Fort Lauderdale, where the operation was located before moving to North Florida in 1986, Henrietta pioneered the breeding, training, showing and promotion of Pasos — a breed then practically unknown in this country. For her achievements, she was inducted into the Paso Fino Horse Association’s (PFHA) Hall of Fame in 2002, as was El Pastor, the foundation sire, in 2000.

A PFHA founding member who in her day won her share of prizes and helped popularize the breed, Henrietta today is accorded iconic status among Paso Fino aficionados. Robin, meanwhile, is an accomplished horsewoman and trainer in her own right, whose hundreds of awards — including the prestigious USA Equestrian C.J. “June” Conan Jr. Trophy in 2002 — attest to her excellence. She also judges and is active in the PFHA and associated organizations. 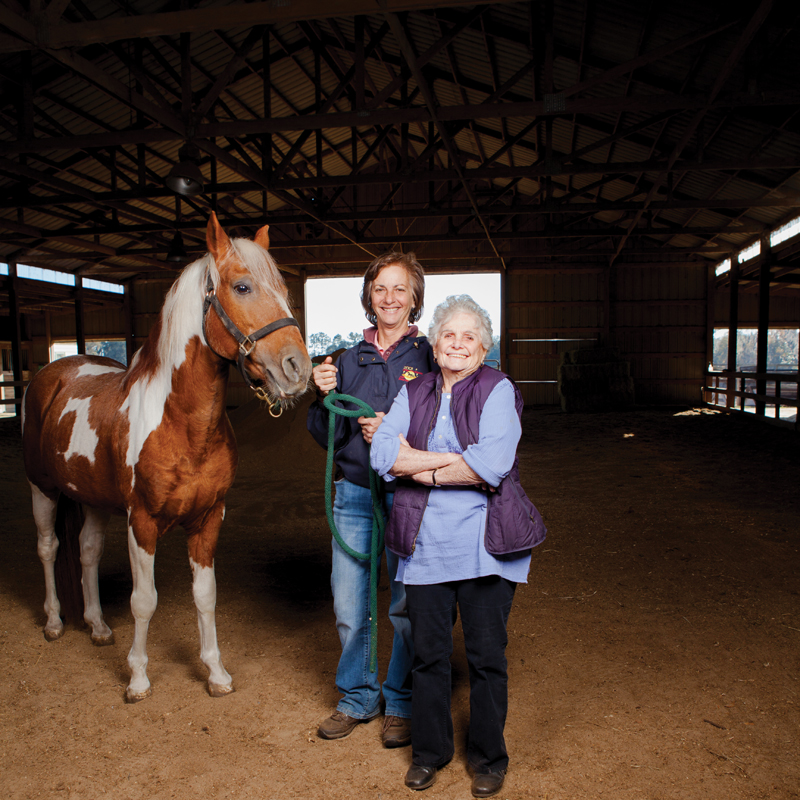 Together, the two own the 100-acre ranch, which includes a 29-stall barn with an indoor riding ring, 10 paddocks, an outdoor riding ring and seven pastures. They also own 46 Pasos and board another 30 from clients across the country. Pasos, Henrietta and Robin will tell you, are smart, versatile, good-natured horses that can do anything other horses can do, including cantering, loping, jumping and, yes, even barrel racing and cattle herding. Their singular distinction, however, is their extraordinarily smooth gait. When translated from Spanish, Paso Fino means “fine step.”

Adds Henrietta, “They’re incredible. Their legs work right under them in synch. There is no other horse in the world like it, not even the American walking horse. It’s like sitting in a rocking chair.”

Smitten with Pasos upon her first ride on one in 1967, Henrietta flew to Puerto Rico soon after and purchased one. Native to Spain, Pasos were brought to the New World by Christopher Columbus on his second voyage in 1493 and over the centuries were largely confined to Latin American countries. When Henrietta was introduced to the breed, Greener Pastures Ranch was a quarter horse operation — but it soon converted to Pasos.

From the start, her zeal in promoting the breed was near-missionary.

“It was visceral,” she says. “It was as important as eating, spreading the word.”

This explains the family’s countless weekend trips across the country in the early years to sell Pasos wherever and whenever the opportunity presented itself, regardless of the event’s distance, obscurity or size.

“Exhilarating,” Henrietta characterizes these excursions. “Exhausting,” Robin, then about 11, recalls them.

Did these early efforts possibly represent more a cause than a business proposition?

Nonsense, Henrietta asserts; it was always first and foremost a commercial venture.

“In my core I am a businesswoman,” she says. “Money was always the goal. But there was so much passion mixed with it, it was the perfect marriage.”

That passion, which Robin shares, forms the cornerstone of their successful business partnership, notwithstanding their differences in personality and temperament. The two admit to having disagreements, as business partners will. But ultimately, the mother-daughter bond prevails.

“In spite of it all, we love each other,” Henrietta says. “Somehow, we come around.”

Most importantly, they balance each other, says Robin. “No matter our disagreements, she’s my mother and I’m her daughter and we share the same vision, though we may sometimes differ on how to get there.”

Horse ranching, the two agree, is a labor-intensive business, requiring a thorough understanding of horses and 100 percent commitment.

“If you lose your reputation, you’re done,” Robin says.

In their case, the will to excel is formidable.

“We like to win,” Robin says. “I think my mother is the most competitive person ever, maybe even more than me.”

And success is a given.

“I wasn’t willing to accept anything less,” Henrietta says of her accomplishments. 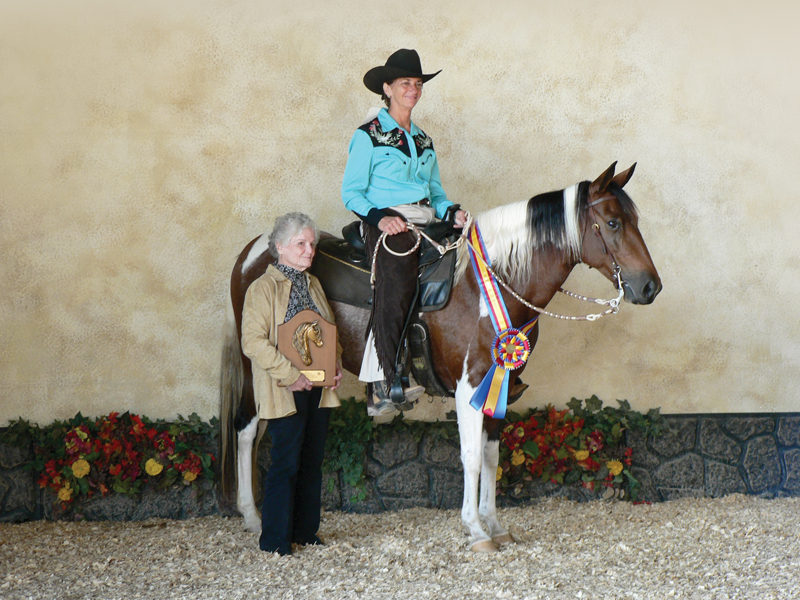 Cocada Sin Par is crowned the National Champion of Western Pleasure at the 2014 Grand National Show in Lexington, Kentucky. Shown also are owners Robin (astride horse) and Henrietta Ratliff.

Nowadays, Robin largely manages the operation and handles the day-to-day chores, from bookkeeping and blacksmithing to ordering feeds and operating and repairing the equipment. All the while, she trains horses and shows, judges and conducts clinics nationally.

The boarding and training mostly generate the ranch’s present income, the breeding/selling aspects having taken a back seat since the recession.

“The market took a hit some eight years ago, and we slowed on the breeding and selling,” Robin says.

“By gum, the minute the market returns, there’ll be babies on the ground again at Greener Pastures,” ” Henrietta enjoins.

The average Paso will sell between $3,000 and $5,000. Depending on the circumstances and a horse’s experience and pedigree, however, that price can vary greatly.

“A horse is worth how much somebody pays for it that day,” Robin says.

She attributes the ranch’s successful navigation of the hard times to operating within their means and never losing sight of their priorities.

“It comes down to not spending what you don’t have, and the horses come first,” Robin says. “A lot of horse people went under because they overextended themselves.”

Her mother’s foresight also was a factor.

“She’s one of those people who can see ahead,” Robin says. “She sees the big picture.”

At 84, Henrietta no longer rides; she quit four years ago. Still passionate about Pasos, however, she regularly attends shows and cheers for Robin, whom she considers the best rider and trainer, bar none.

“She can take any horse and win,” Henrietta says.

As for Pasos, give Henrietta her due for a mission accomplished.

“It’s no longer a breed struggling to be known,” she says.