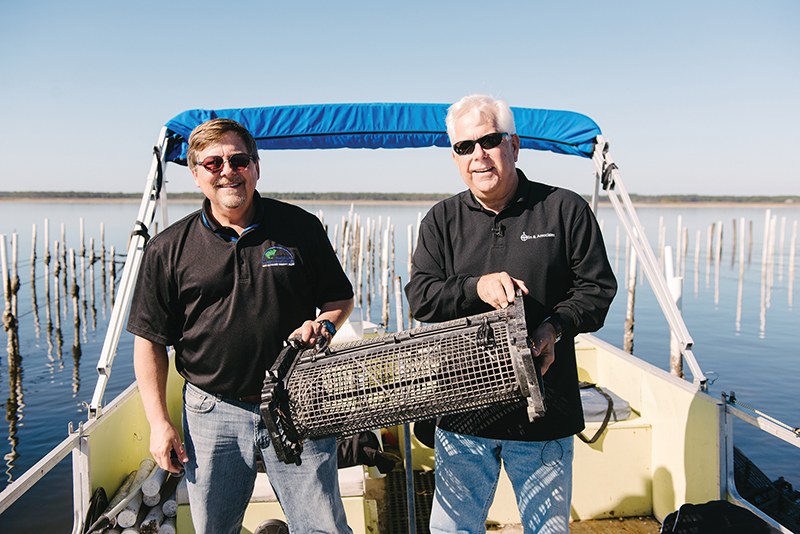 Bob Ballard, director of the Wakulla Environmental Institute (WEI) at Tallahassee Community College, at left, and Rob Olin of the Panacea Oyster Co-Op hoist an oyster cultivation cage. The technology employed by the cooperative was developed by WEI.

As the tide recedes, the cylindrical metal cages become visible, row upon row of them. They comprise a system that altogether takes up 1.5 acres — about the size of a football field — in Oyster Bay near Panacea. Partners Rob Olin and Robert Seidler pull their boat alongside the outer row of upright PVC pipes that mark the system’s western boundary and act as posts to support lines where the cages hang. Leaning over the boat’s side, Olin lifts two of the cages, revealing their oyster-filled interiors. This particular lease, he says, gesturing toward the 1.5-acre area, contains 250,000 oysters, soon to be a million.

“This is the only lease built out so far, but eventually all 38 will be built out,” Olin says, referring to contiguous leases of similar size comprising 56 acres in Oyster Bay.

Periodically at low tides, Olin or his workers will inspect the oysters; clean them and the cages of algae, barnacles and other fouling organisms; sort the oysters into cages according to size; collect the mature ones; and replenish the oysters and cages as necessary.

It’s hard work and all part of a budding venture that, when fully realized, the two say will not only resurrect the oyster industry in Wakulla County but also create hundreds of jobs, revitalize the bay, bring back a culture, promote ecotourism and spawn sustainable economic development.

“Ideally, we’re shooting for 500 million oysters a year in 10 years,” Seidler says. “We don’t know how close we’ll get, but that’s the vision.”

“And the best thing about what we’re doing is it’s repeatable throughout the Gulf,” Olin says. “Our state’s got more farmable water than any other in the Union. Florida can become the sea basket for the world.”

Olin and Seidler are nothing if not enthusiastic about their project, which has been three years in the making and is still developing. Already, the enterprise boasts a marina, which will eventually include an oyster hatchery/nursery; a cooperative that will grow the oysters, along with a branding, marketing and selling component; and wholesale customers that include restaurants Table 23 and the Governor’s Club in Tallahassee. The enterprise also has the blessing of the overseeing state and federal agencies and is partnering or planning to partner to one degree or another with various learning institutions, including Tallahassee Community College, Auburn University, Florida A&M University and Florida State University.

The uniqueness of their method, Olin and Seidler say, resides in the floating cages, which the waves and currents rock and low tides expose twice daily.

“These oysters never stop moving,” Seidler says. “That’s a big difference between wild oysters that settle on the bottom and our tumbling oysters. Because they’re rolling in the cages their whole lives, they grow faster, healthier and firmer.”

That’s because, Seidler explains, floating near the top, the oysters are less susceptible to seafloor predators; the continuous water flow brings them more nutrients; the rocking motion knocks off fouling organisms and chips away at their shells, forcing the oysters to grow round and thick rather than long and thin; and the tidal exposures cause them to contract, creating firmness and texture in the meat.

“This method in the upper water column is relatively new, and completely new to North Florida,” Seidler says.

As the two describe the plan, it’s both bold and ambitious. Their aim is to produce oysters for national and international distribution, using a pasteurization process that will not only render the oysters bacteria-free but also give them a longer shelf life. They also plan to spawn spats, or oyster larvae, for their own use and for sale.

“It’s one of the most important parts,” Olin says. “We’re going to control our seed. Think if a corn farmer couldn’t get corn seed. It would be tough staying a corn farmer. That’s been one of our biggest challenges.”

Another way to frame it, Seidler says, is that the culture has traditionally harvested but not replenished oysters, which has contributed to their decline. Their model, he says, puts back more oysters than are taken, adding to the wild population.

“Instead of being negative in terms of taking, we’re positive in giving back,” Seidler says. “It’s never been done before.”

In a paean to oysters, Olin calls them the original eco-engineers, a keystone species that sets the foundation for other species and acts as a filtering system for estuaries.

“When you wipe out the oysters, you wipe out that structure as well as the ultimate filtering system,” Olin says. “They’re like the canary in the cave. And we get to help put back that cornerstone block.”

“You’re witnessing the largest resurrection project in Wakulla County history,” Olin continues. “This will help this water come back to support other aquatic species in decline. It will bring back a community that was built on fishing. And it will reinvigorate a culture that’s been here for generations, because we’re going to generate millions of oysters that will generate hundreds of jobs.”

And it’s more than doable, Seidler says, citing a community in southern France whose oyster aquaculture dates from the 1860s and that he visited as part of his research.

“They produce three-fourths of what our Gulf produces, but they also have oyster tourism,” he says. “And it’s the area’s single biggest revenue source.”

He cites the several freshwater springs bubbling into Oyster Bay, its pristine water quality, the 1 million acres of natural wildlife refuge surrounding it and the oyster industry that will be.

“It’s going to be Florida’s grand ecotourism destination location,” he says. “Panacea and Spring Creek will start to build up as this wonderful Galapagos.”

The two admit their project has a ways to go. They’re still learning, experimenting and refining, even as they move forward. When challenges arise, however, they return to their vision.

“We go back to the inspiration that we’re part of this resurrection that will be the catalyst for the change that future generations will need,” Olin says.