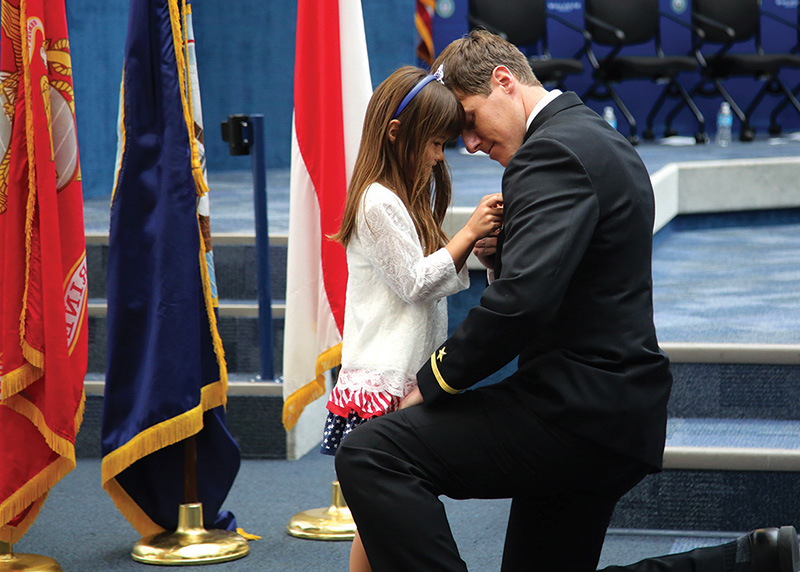 Ensign Matthew Bray is pinned by his daughter during a ceremony at the National Naval Aviation Museum on board Naval Air Station Pensacola.  The ceremony marked the graduation of the newest aviators from Training Air Wing Six (TRAWING SIX). Bray has been selected to fly the P-8A Poseidon.

The “Cradle of Naval Aviation” is also a fine place to rest.

According to the U.S. Department of Actuary, Pensacola’s 325– ZIP codes are home to the highest concentration of military retirees in the nation — totaling 33,560 as of September 2015.

Retired Navy Rear Adm. Donald P. Quinn has traveled far and wide with the military. Although he reports that there are many bases with fine community relations, he believes Pensacola’s relationship with its military is among the best in the country.

After serving more than 30 years in the Navy, culminating with his command of the Naval Education and Training Command at Naval Air Station Pensacola, today Quinn works as a consultant to the Greater Pensacola Chamber of Commerce — alongside Vice President of Armed Services Debi Graham, who he largely credits for the strong military-civilian relationship in the area.

“Debi is known throughout the East Coast because of her participation in defense forums and the success she has generated here,” Quinn said. “Other civilian communities around the country come to our chamber to ask how we do it. We lead the way.”

Quinn says the number of retirees can be chalked up to the state’s pursuit of military contracts and the sheer number of bases in the area. It’s also where many members of the armed services first earn their “wings.” Because NAS Pensacola is a training base, people have fond memories of their time there.

“It’s warm. The climate is good. The quality of life is good,” Quinn said. “So many Air Force, Army, Navy, Coast Guard and Marine folks have come through here for training and remember it with a special place in their hearts.”

Pensacola treats the military well with regard to schools and jobs, including the hiring of spouses. It’s also a smart place to start your own business.

“Because of the cost of living, it’s easier to open your own business because conditions are good and you don’t have to make as much money to maintain a good quality of life,” Quinn said. “There is less risk involved than in other places in the country.”

A Century of Community Support

In 2014, NAS Pensacola celebrated its 100th anniversary as the Navy’s first Naval Air Station. For more than 100 years, the city of Pensacola, Escambia County and surrounding areas have continuously supported both the base and its mission “to efficiently deliver the very best readiness from the shore.”

One of only four installations in the continental United States with an active airfield and a deepwater port, NAS Pensacola is home to 126 Department of Defense and non-DoD tenant commands, according to public affairs officer Patrick Nichols.

To assist the community in its support of the military, Escambia County and the Pensacola Chamber have received funds via grant programs from the Office of Gov. Rick Scott, administered by Enterprise Florida and funded by the state Legislature.

“The funds received by the county and the chamber have been integral in land acquisition projects to prevent encroachment, provided transportation and base access upgrades, and assisted in the Cyber Warfare Battle Lab acquisition and surface restoration,” Nichols said.

The community’s dedication is reciprocated.

“With more than 23,000 people attached or working at NASP, the installation enjoys an incredible relationship with the community,” Nichols said. “All of the civilian employees and many of the military members live in and support the local area.”

The annual economic impact of NAS Pensacola is more than $1.3 billion, around 40 percent of the local economy — even greater than tourism.

Looking to the Future

The chamber’s Graham points to a call to action by the Association of Defense Communities to foster increased collaborations between military bases and their host communities.

According to a new paper released by the association, “States and communities have a significant role to play in helping military installations adapt to a variety of challenges — including budget constraints, aging infrastructure, evolving missions and weapons systems and generational changes in social attitudes.”

That’s where Graham’s work comes in, and Quinn says there’s no one better suited to the task.

“She can connect you with the city, the county, the state, the businesses,” he said. “She’s a connector. I don’t know if you can put a value on that.”

Quinn and Graham work together within the Military Affairs Department of the chamber to enhance current commands and missions, ensuring stability and quality of life for Pensacola’s military members and their families.

This includes helping the base become more proactive in utilizing alternative fuel sources such as solar energy, fostering public-private partnerships and assisting with changes in base security.

When base security tightened at the main gate, Graham was instrumental in securing grant funding to increase signage on Interstate 10 and feeder roads, directing visitors to the back gate in an effort to maintain the level of security while still giving the community access to on-base attractions.

The chamber is also raising awareness. Each year, Graham and her team coordinate a five-county Washington, D.C., fly-in to ensure that elected officials know the issues facing the defense community in Northwest Florida, from Escambia to Walton County.

“That’s the role that we at the chamber are taking,” Graham said. “We are looking at how the community can support the installation as a ‘base of the future,’ including hardening of infrastructure and making sure there are no encroachment or security issues.”

The base is seeing an increase in training, largely due to funding, but first and foremost in an effort to enhance its quality and effectiveness, according to Rear Adm. Quinn.