» Florida insurance companies are providing a record level of support for the Florida Insurance Industry Scholarship Program, helping low-income families across the state send their children to schools best suited to their needs. To date in 2017, Florida insurance companies have committed $61.2 million to fund 9,380 scholarships. Peter Corrigan, president of Florida Family Insurance Co. and chairman of the Florida Insurance Industry Scholarship Program, said the industry is on track to double its contributions to the program this year. Step Up for Students is the nonprofit organization that manages the scholarship program, which in turn helps manage the needs-based Florida Tax Credit Scholarship Program. Step Up For Students recently enrolled the program’s 100,000th student.

» Danielle Alvarez of Crawfordville was appointed to the state’s Technology Advisory Council, and Peter Butler of Tallahassee was reappointed. Alvarez is the cyber security strategist for Hayes e-Government Resources and is the Technology Advisory Council’s former chief information security officer. She succeeds Kenneth Fountain. Butler is the director of the technology sector for National Strategies, LLC. Butler and Alvarez are scheduled to serve through
June 30, 2020.

» Tallahassee resident Mark Kruse and four others were appointed to the state Task Force on Affordable Housing. Kruse, the policy coordinator for the Governor’s Office of Policy and Budget, received his juris doctorate from the Florida State University College of Law. He fills a vacant seat for a term ending Jan. 1.

» Ben Gibson, of Tallahassee, former Deputy General Counsel in the Executive Office of the Governor and currently an attorney at Benjamin J. Gibson, P.A., has been appointed to the State Board of Education. Gibson succeeds John Padget and is appointed for a term that began July 14, 2017 and will end December 31, 2020.

» Casey Reed, of Tallahassee, Florida state director of legislative affairs for AT&T, was appointed Aug. 4 to fill a vacant seat on the E911 Board for a term ending Oct. 28.

» In celebration of its 10th anniversary in Tallahassee, OliverSperry Renovation & Construction, an active supporter of regional non-profit campaigns and programs, recently committed to donating $40,000 to more than 30 local organizations in 2018.

» In its fifth year of operation, FL Aviation Center is now among the limited number of flight schools nationally certified by the FAA under Title 14 Part 141 to provide a structured flight-training curriculum endorsed by the Federal Aviation Administration. Earlier this year, the Aircraft Owners and Pilots Association (AOPA) placed the flight school on the Flight Training Excellence Awards Honor Roll.

» The Florida Association of the American Institute of Architects (AIA Florida) recently presented Patrick E. Hoy and James “Monty” Stark III, the founders of Hoy + Stark, with the Firm of the Year award at the 2017 AIA Florida Annual Convention in Naples.

» Inside Public Accounting named James Moore & Co., a tax accounting, wealth management and consulting firm with offices in Daytona Beach, Gainesville and Tallahassee, among the nation’s top 200 accounting firms. The annual IPA rankings are considered a gold standard for assessing the state of the accounting profession today.

» The Florida Society of Association Executives recently honored the Florida Dental Association, headquartered in Tallahassee, with the 2017 Association of the Year Award. The award, given in recognition of the FDA’s efforts to support the dental profession and advocate for Florida’s oral health, was presented at the FSAE’s annual conference in West Palm Beach. 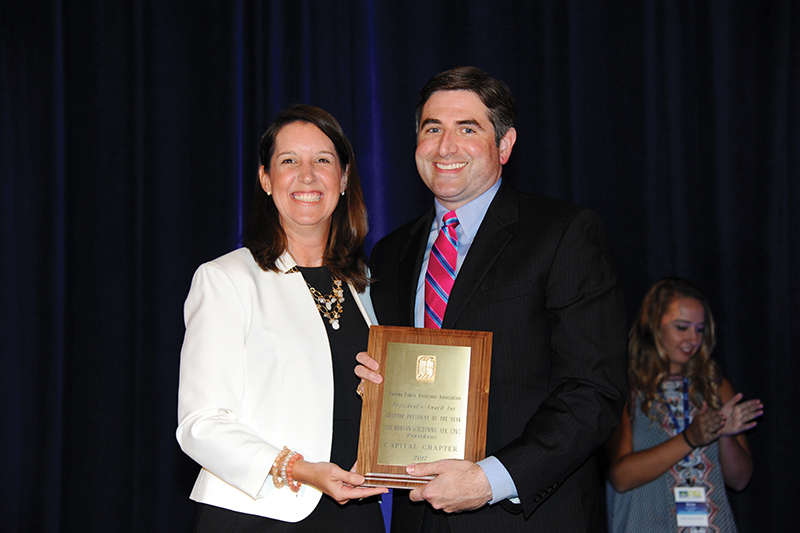 » Jay Morgan-Schleuning, outgoing president of the Florida Public Relations Association (FPRA) Capital Chapter, was named Chapter President of the Year by the association. The award was announced at the FPRA’s annual conference in Orlando.  Under Morgan-Schleuning’s leadership, the FPRA Capital Chapter membership grew to 140 individuals, making it the largest chapter in the state.

» For its fifth anniversary, Emerald Coast Theatre Company (ECTC) received its largest donation ever — a sum of $10,000 — from isidro dunbar Modern Interiors (idMI), a Miramar Beach business that specializes in modern interior design and furnishings. Presenting the donation were idMI owners Todd D. Reeves and Jorge I. Saiz. Reeves also serves on the ECTC Board of Directors.

» Britt Landrum Jr. , former CEO of LandrumHR, has announced that his son, H. Britt Landrum III, is the new CEO of the Pensacola company, which provides professional employer services.

» Local orthodontist Casi Stubbs recently presented Chelsea Fox of Emerald Coast Children’s Advocacy Center a check for $1,425. The funds were the proceeds of a recent raffle for a BOTE Board.

» Volunteer Florida recently coordinated with Pensacola business Two Men and a Truck on a nonperishable item drive for victims of Hurricane Harvey, which wreaked havoc on east Texas and Louisiana in late August and early September. The business volunteered its own storage facility to assemble donations until was possible to make the trip to the damaged areas, and drivers volunteered to use their trucks and donate their time to make the trip.

» The Florida Department of Transportation (FDOT) is widening and improving State Road 390 (St. Andrews Boulevard) from Baldwin Road to Jenks Avenue in Panama City. The project, estimated to cost $17.1 million, will transform the road from two lanes to six lanes with bike lanes and sidewalks. The project should be finished by early 2020. Road closures, when necessary, will occur between 8:30 p.m. and 6 a.m.

» The Bay County Chamber of Commerce recently honored their president/CEO Carol Roberts for 40 years of service to the Chamber and to Bay County in general.

» The Haughty Heron, in Port St. Joe, hosted a benefit event for the victims of Hurricane Harvey. All donations, whether monetary or of non-perishable goods, were donated directly to those who were affected by the late August hurricane.

» In October 2015, the City of Carrabelle was awarded a Florida Recreation Development Assistance Program (FRDAP) grant for improvement phases 2 and 3 at Sands Park on U.S. 98. The project includes the completion of an asphalt multi-modal path and a new parking lot.

» Ameris Bank was recently named Title Sponsor of the 2017 Wakulla County Chamber of Commerce Business Excellence Awards. Ameris Bank headquarters are in Moultrie, Ga., and the bank has branches in Tallahassee and Crawfordville.

» Natasha Pennycuff, a first-grade teacher at the Franklin County School, was recently named Franklin County Teacher of the Year and was honored with the Governor’s Shine Award.

» For the third year in a row, Golf Advisor named the golf course at St. James Bay Golf Club, in Carrabelle, a Top 20 Public Golf Course in Florida. The award stems from positive customer reviews of Florida golf courses.

» James “Jim” Dean, City Manager of Marianna, was appointed to the Chipola College District Board of Trustees. Dean, who previously served in the U.S. Marine Corps, succeeds Virginia Stuart and is appointed for a term ending May 31, 2021.

» James Jefferson Goodman Jr., of Bonifay, was appointed to the 14th Judicial Circuit Court. Goodman previously served as an Assistant State Attorney for the circuit and was a litigation associate for Balch & Bingham, LLP. He fills the vacancy created by the resignation of Judge Hentz McClellan.

» The Cottondale FFA Chapter recently received the highest rating from the National FFA Organization: the Three-Star National Chapter Award. Only 144 chapters out of 7,859 received the award; in Florida, only 16 chapters were awarded out of 325 FFA chapters in the state.