Building For The Future

Looking beyond beaches and the military to boost economic development

Okaloosa and Walton counties are home to some of Florida’s most pristine beaches and the Department of Defense’s largest military installation — Eglin Air Force Base. But even with booming economies boosted by a strong military presence and ever-increasing tourism, the counties are on a mission to seek diversity in the region’s economy.

A push to encourage entrepreneurship and lure manufacturing and aviation-related companies is aided by the availability of industrial and aviation park space, along with the presence of a skilled workforce — many of them retired military.

“We realized from the BP oil spill that we needed to be diversified. We need to be growing other avenues of employment and revenue,” said Bill Imfield, interim executive director of the Walton County Economic Development Alliance. The county is also actively seeking development of affordable worker housing, something that businesses looking to set up shop in the area will need.

“The federal government has a form of tax credits for developers who do workforce housing, and we’re working with the county to make lands available for sale or for lease, or in the form of a partnership,” Imfield said. “We want to have people able to live and work close to their business.”

In Okaloosa County, home to the bulk of the Eglin reservation and where seven of the nation’s 10 top military contractors have a presence, there is a drive to educate those serving at Eglin and nearby Hurlburt Field about the opportunities available locally as they prepare to separate from the military.

“Many of these retirees are in their 40s with great skill sets,” said Nathan Sparks, executive director of the Economic Development Council of Okaloosa County. “I think we’re going to see our defense sector experience noteworthy growth. Our defense contractors are all optimistic that military priorities are going to be on the front burner. And that bodes well for us.”

Meanwhile, Venture Hive in Fort Walton Beach is helping members of the military and their dependents delve into the world of entrepreneurship.

“Because of Eglin being a test facility, we have a lot of technologically bright individuals, and many have chosen to build a business in our community,” Sparks said.

Growth in tourism and business are dependent on reliable transportation, and much has been done to improve the ability for visitors and locals to get around — as well as into — both counties.

“The service out of VPS is unlike anything else in the region. We have more routes than any other airport in the Panhandle,” said Tracy Stage, Okaloosa County’s airports director. “In January (2017), we picked up 11 additional cities, and now we’re flying to some of the largest metro areas in the country, including New York, St. Louis, Pittsburgh, Baltimore, Las Vegas and Indianapolis.” A good deal of the passenger traffic is related to business associated with Eglin, which shares its runway with the civilian airport, and the myriad defense contractors that surround the base. But, Stage adds, “In 2016, we brought in roughly $13 million worth of economic impact to the region from tourist spending alone.”

And several major highways used by visitors and local residents are getting a makeover to ease traffic congestion, which gets particularly troublesome at the height of the summer tourist season. U.S. Highway 98, the major east-west artery that hugs the coast, is in the midst of a widening project. 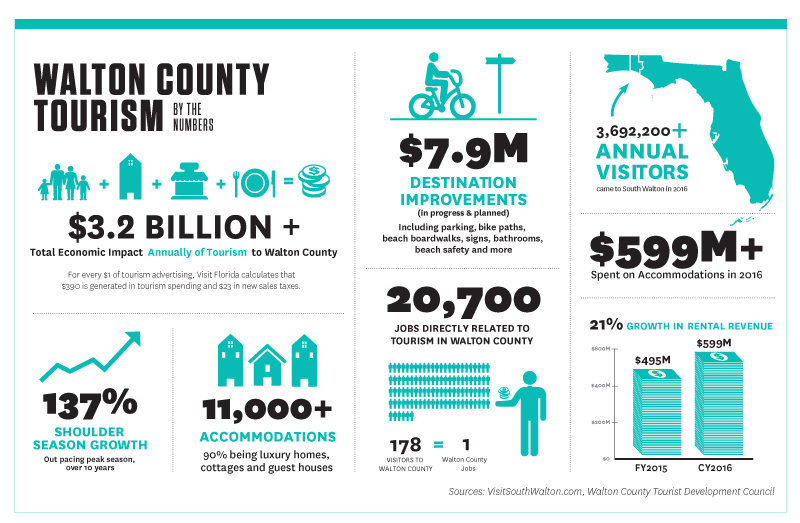 U.S. Highway 331, a primary north-south corridor for Walton County, is also adding extra lanes to help ease traffic traveling to and from Interstate 10, an effort that will facilitate the flow of tourists in season and act as a major evacuation route for natural emergencies, such as hurricanes.

“We need to have expansion to accommodate the growth,” Imfield said of the transportation projects.

And to make both corridors more attractive to those who travel it — while boosting local property values and the business atmosphere — the Scenic Corridor Foundation, founded in 1994, continues to encourage projects and programs that promote good development and design in Walton County. The community recently celebrated completion of the first phase of The East Corridor Improvement Project to provide multi-use paths, median landscaping and other safety improvements in the Inlet Beach area, which is considered the eastern “gateway” into Walton County on U.S. 98.

Tourism numbers continue to jump in Walton and Okaloosa counties — and those visitors are making a big impact on the local economy.

“This is a tourism dependent economy,” Loughman said. “For every 178 visitors, one job is created. And visitors account for more than $77 million of Walton’s government revenue. The actual cost of servicing those visitors (road maintenance, law enforcement, beach maintenance) is more than $56 million, so our net benefit is nearly $21 million.”

“Tourism is Okaloosa County’s largest private industry, and we are happy to report that we continue to grow as a county,” said Maureen Morgenthien, deputy director for sales and marketing of the Emerald Coast Convention and Visitors Bureau. “We are excited for what 2017 will bring, including enhanced marketing and communications efforts to support the county.”

In 2015, the latest year for which Okaloosa statistics are available, more than 32,000 jobs were supported by tourism. Out-of-state direct visitor spending amounted to $2.9 billion that year. Including indirect and induced impacts, tourism generated $4.8 billion in total business sales, $1.2 billion in income and $600 million in state and local tax revenues. 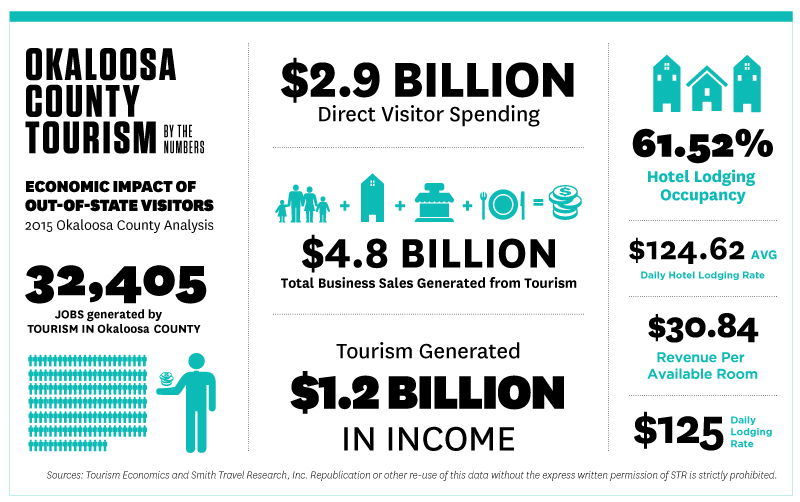 Sources: Tourism Economics and Smith Travel Research, Inc. Republication or other re-use of this data without the express written permission of STR is strictly prohibited.