When Home Source International began looking for an American home for its “Made in the USA” products, it began the search in six Southeastern states. In the end, Florida was the winner when company leaders honed in on Marianna in Jackson County.

The deciding factors were the incentives provided by local and state officials and the skills of the local workforce.

“It boiled down to we needed a place, and what the city, county and state put together was a deal that no one wanted to walk away from,” said Dennis Rudd, House Source vice president of manufacturing. “It just got to the point where you couldn’t say no.”

Important benefits included a location next to the Marianna Airport, close proximity to Interstate 10, plus the availability of rail lines and a nearby deepwater port, Port Panama City.

By the end of 2015, it is expected the local Home Source plant will employ 303 workers at an average wage of $14 an hour (figuring in executive and blue collar wages). The plant’s furniture division is already working, and Rudd said the machines will soon be in place for the linen division to start churning out products for sale to retail outlets and the hospitality industry.

The economic development victory of bringing Home Source to town, announced in June 2012, is yet another feather in the cap of a community that has successfully pulled together over the past decade to lure new business to this mostly rural area of Northwest Florida. The boost was desperately needed after the devastating loss of businesses, including the Russell Corp. fabric manufacturer, in the late 1990s.

While agriculture remains the mainstay of the local economy, more clean industries are moving in. The county has scored enough successes in the past several years that it has managed to cancel out job losses from companies that were forced to close during the Great Recession — a claim that few communities are lucky enough to make. 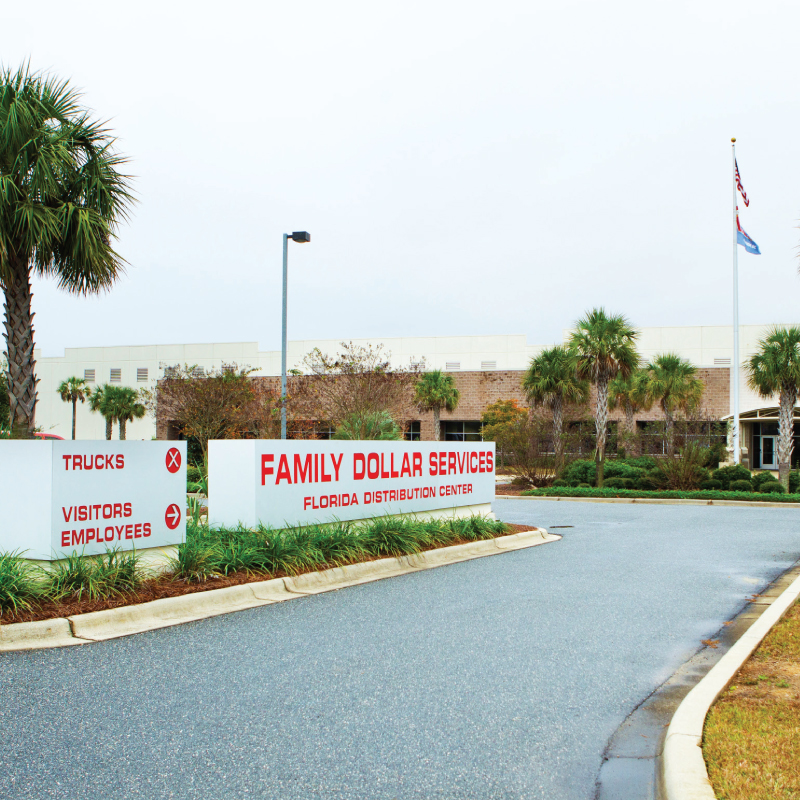 The Family Dollar distribution center off Interstate 10 was the first in many recent economic development successes. Photo by Scott Holstein

“Bringing in these businesses has been crucial,” said David Melvin, a civil engineer and owner of a consulting engineer firm who has been an essential partner with the county and city in analyzing infrastructure needs for companies looking at specific sites in Jackson County. “We made up for losses in employment. We’ve been fortunate to replace lost jobs.”

Seeking new business has been a coordinated community affair for about a decade. The mold was set when local, state and community leaders pulled together to net a Family Dollar distribution center that is now a familiar site to travelers passing by Marianna on Interstate 10. Their efforts to persuade a Fortune 500 company in 2003 to build a $50 million distribution center amidst miles of cotton fields gave this small town an economic boost and provided hundreds of new jobs. Today, 300 to 400 trucks are loaded or unloaded each day at the site.

It was the Family Dollar success — which included the community delivering on its promise to make needed improvements, including providing water and sewer, to the industrial park within a year — that helped pave the way for subsequent economic victories.

“We convinced the company we could do it in one year, and we did do it,” said Bill Stanton, executive director of the Jackson County Development Council. “Then we were able to use that example (when bidding for other projects).”

Melvin gives much of the credit to Stanton, a “master of economic development” who assembled the team necessary to work on the project and then was able to win the support of both the city of Marianna and the county governments.

“We have a can-do attitude here,” Melvin said. “We can make it happen. We can find you a location, and we can put together the necessary incentives and infrastructure to make it work here.”

Art Kimbrough, who until recently served as president and CEO of the Jackson County Chamber of Commerce, called Family Dollar the “game-changing” project for the community.

“It started the wheels turning on other projects,” he said. “The economy was booming, and we were in the five-year build up to the crash. Dynamics were shifting from stagnant to growth. And with that one success, they had a model they could replicate.”

In 2006, Arizona Chemical committed to a $10 million distribution center project on an 11-acre site at the same industrial park on I-10, partly because the Family Dollar project had prompted some of the infrastructure improvements that would meet the needs of both. Again, state grants and local cooperation were essential in sealing the deal.

Only a few years later, Jackson County found itself in competition with states from Texas up to Virginia for Green Circle Bio Energy,  a Swedish-owned company willing to make a more than $100 million capital investment wherever it settled. Stanton led the drive to put together a site for the company that included easy access to the Bay Line Railroad and the deepwater Port Panama City, along with a four-lane access road, turn lanes off Highway 321 and a traffic light.

The result? In 2008, the world’s largest wood pellet plant began production at a 225-acre site in Cottondale. The plant has a 560,000-ton annual capacity for producing the renewable energy product from Southern Yellow Pine.

Then, in 2009, Ice River Springs opened its Marianna facility, bringing much-needed jobs during the depths of the economic recession. It was part of an ambitious expansion plan by the Canadian company to enter the fast-growing U.S. bottled-water industry. In a 330,000-square-foot building — big enough to fit five football fields — the company works to produce 43,200 bottles of water per hour.

Why did it choose Marianna? Logistics were a major selling point, the close proximity of I-10, which sits only seven miles away from the plant at the Marianna Airport Industrial Park.

“What I found fascinating is how the community came together, going back to the Family Dollar experience,” Kimbrough said. “The penalty of failure was a lot bigger than the petty personal politics of the city and county. And that launched a decade of success for Jackson County.”