“Community Catalysts” have been changing the Tallahassee landscape for 10 years 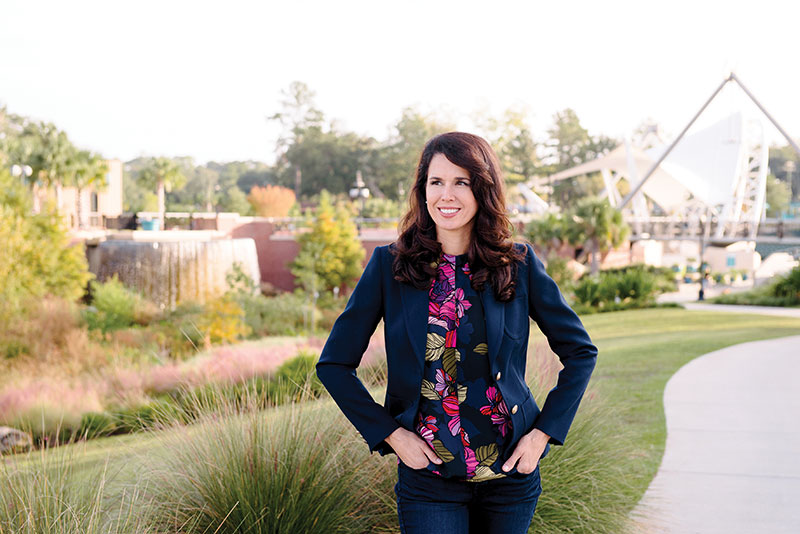 Betsy Couch, executive director of KCCI, stands in Cascades Park, which is a venue for concerts, festivals and everyday enjoyment.

No doubt, these parts of Tallahassee were destined for better things. In 2007, the Knight Creative Communities Institute came to town and worked with city leaders, committees and various partners to guide these developments and improve economic development.

“KCCI enhances economic development by helping cultivate a more engaged community, and then, through that, implementing projects that enhance the sense of place in Tallahassee,” said Betsy Couch, executive director of KCCI. “What we’re doing is we’re building upon (existing) assets. We’re taking something that we already have in town and looking at how can we make it better, how can we make more people aware of it? And you’re creating new places.”

The John S. and James L. Knight Foundation picked Tallahassee in 2007 as the incubator for a pilot economic development program driven by the “creative class” principles espoused by economist Richard Florida. According to his theories, economic growth is fostered by creating a “sense of place” that is attractive to a wide range of artists, musicians, engineers, educators and other assorted intellectuals. In short, if you have the right kind of atmosphere and amenities, you will attract the right kind of people who drive the economy.

KCCI depends of a diverse set of volunteers, called “community catalysts,” to serve on various project teams. There are between 10 and 16 volunteers on each team; over the past 10 years, more than 200 catalysts who have served on 20 or more projects. KCCI trains volunteers on Richard Florida’s principles, reminds them of the city’s assets, and gets them to work together on projects that further enhance those amenities, Couch said.

“One of the nicest unintended consequences is it fosters a deeper connection and creates future leaders,” she said.

By the numbers: Creating a Sense of Place

A total of $11 million has been invested by the city of Tallahassee Community Redevelopment Agency since 2011 in large-scale incentives to support major redevelopment projects in the Gaines Street area. This money resulted in approximately $195.8 million in private investment, most of which was used locally.

The estimated increase in post-development taxable value is nearly $150 million.

The Identify Tallahassee team enhanced a sense of place and instilled civic pride in current and future residents in Midtown.

The Midtown Action Plan was the basis for including a large-scale Midtown place-making project as part of the Blueprint sales tax extension.

The project includes a number of key improvements totaling $22 million.

More than $500,000 has been secured for enhancements to the Midtown area.

The Cultivate Cascades team conducted research on Cascades Park, pushed for a more extensive amphitheater and collaborated with community partners to develop Discovery, a unique “playscape.”

To date, 28,349 people have attended paid concerts in the amphitheater. The economic impact of the 2015 Avett Brothers concert alone was $620,200. The total economic impact for Word of South Festival 2016, which took place in Cascades Park, was $871,700.

On any give day, you will see a variety of people, from all walks of life, enjoying Discovery in Cascades Park. The Discovery project connected more than
35 private and public partners to bring the playscape to life. This resulted in more than $300,000 in cash donations and more than $250,000 in of-kind donations.

The Explore Outdoors team worked to promote Tallahassee and the surrounding areas as a premier outdoor recreation destination.

In 2010, the team worked with Visit Tallahassee to create the Explore Outdoors Task Force, which worked to promote the Big Bend region as a premier outdoor recreation destination with world-class, nature-based resources.

The team’s efforts ultimately led to the branding and marketing of Trailahassee.com, which attracts nearly 20,000 unique annual visitors; 25 percent of the 2.3 million annual visitors to Tallahassee-Leon County participate in outdoor activities. (Data from Visit Tallahassee)

​The EllaVate Lake Ella team made improvements to Lake Ella, including lighting, landscaping and porch swings. They also helped coordinate events such as Food Truck Thursday to drive more traffic to Lake Ella merchants and truly make it a “place to be.”