An Evolving Vision Begins to Take Shape for The Arena District

A planned expansion of Florida State University is set to break ground in 2019.

Florida State University is narrowing the gap between “town and gown” with a planned eastward expansion of the main campus it has dubbed the Arena District.

The approximately 30-acre site is anchored by the existing Donald L. Tucker Civic Center, which the university purchased in 2012.

It has since invested $25 million in arena and meeting spaces improvements there.

Plans are now on the drawing board to build a massive new College of Business and a convention hotel and conference center.

The idea of this campus expansion was first expressed by former FSU president Eric Barron, who envisioned a district he dubbed The Madison Mile.

“If you look at a map, midcourt at the Tucker Center to midfield at Doak Campbell is roughly a mile and the road that connects the two is Madison Street,” said Kevin Graham, executive director of the FSU Real Estate Foundation.

Much of that stretch of road has been filled in with CollegeTown eateries and shops and newly constructed student apartments, and the vision has since evolved.

“As our planning efforts matured, we started to focus more specifically on the land immediately surrounding the civic center site, itself,” he said.

The university also acquired other smaller contiguous properties, including a five-acre site across the street due south of the Tucker Center that will be home to the first new construction in the Arena District, the relocated College of Business, which has been named Legacy Hall.

Situated on a sloping lot that will front a revitalized Gaines Street, the prominent location, planners foresee, will become a new “front door” gateway to FSU.

With a large, first-floor lobby and atrium area that includes eateries and retail, they are hoping to attract members of the community as well as students and faculty.

The five-story, 218,392-square-foot structure is estimated to cost $88 million, including the building, technology and furnishings. Tallahassee-based Culpepper Construction Co. will team with Boston architects Goody Glancy to build Legacy Hall.

Assuming funding for the building is finalized, groundbreaking is set for the second half of 2019, followed by 22 to 24 months of construction.

The new building is expected to open in fall 2021.

FSU has one of the smallest footprints in the state’s university system, with a main campus covering just 489 acres. (Other Tallahassee facilities, including the FAMU-FSU College of Engineering, a golf course, swimming complex, intramural fields and a radio/television station are located on 850 detached acres about three miles to the southwest.)

Macomb Street is commonly understood as the easternmost boundary of campus.  Developing the Arena District and giving an identity to the area that incorporates FSU’s Law School, College of Business, and Tucker Center formally expands FSU’s presence into downtown Tallahassee as well as its Gaines Street and All Saints neighborhoods. 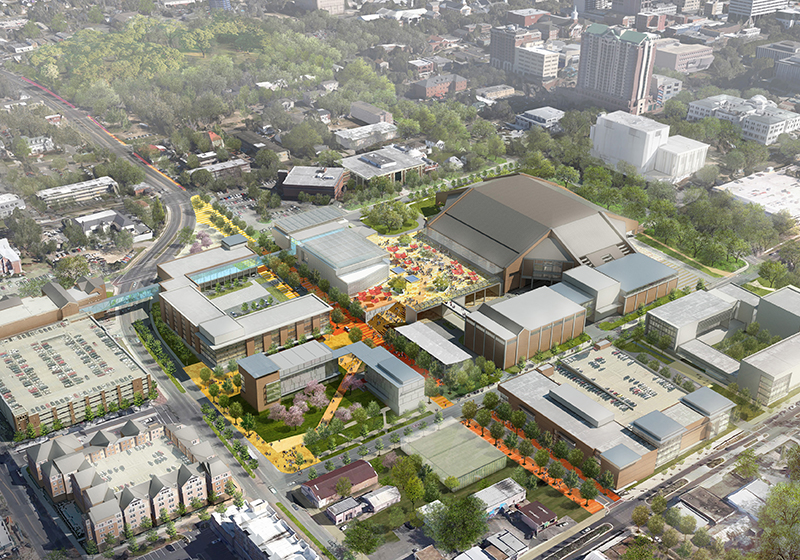 An aerial view of the proposed project. Rendering courtesy of Design Distill and Sasaki Associates LLC

Preliminary plans show foot traffic patterns and amenities that will physically connect the Arena District with the campus.

The more ambitious — and less finalized —plan for the district is construction of a hotel/convention center complex on land currently used as a parking lot for the civic center.

The Florida Society of Association Executives (FSAE) has 1,100 members and just under half of them are based in Tallahassee because it is the state capital.

Civic leaders and association executives have complained for decades there isn’t a large enough space with a connected hotel to accommodate annual and regional meetings that might attract 750 to 1,000 attendees.

“By bringing in a convention center and programming it with the other spaces that are available (and) bringing the utility of a convention hotel, we have an opportunity as a community to build this platform for economic growth,” Graham said.

The Tallahassee/Leon County Office of Economic Vitality has agreed to contribute $20 million in sales tax revenue to the construction of a portion of the convention center.

“The $20 million that the voters agreed to … is where you have breakfast and lunch and workshops.”

FSU planners are aware a building blitz currently going on in Tallahassee will add considerably to the area’s available hotel rooms and meeting spaces.

“Since the original vision for the Madison Mile, several things have changed in our marketplace,” Graham explained.

On the front burner are studies to determine exactly how the new hotel — which has been envisioned as having between 250 and 300 rooms — and the meeting spaces should be configured.

“Over the next six to 12 months, we will be completing the market feasibility analyses that will inform what we need to build,” said Graham. “Once we understand what, the next phase would be to start to plan and design the structures themselves.” If groundbreaking happens as anticipated in 2020, he said the complex should be completed sometime in 2022.

But, he said, the idea of a connected hotel and meeting space is a valid one. “A convention center and a convention hotel should be designed together and constructed together.

They’re symbiotic — they feed off of each other,” Graham said.

Even if successful, Graham concedes that, like other convention centers, this one will probably need some sort of subsidy to operate. “While a convention center brings an economic platform and the community benefits from that type of operation, the structure itself is expensive to operate,” he said.  To the extent that there are annual operational shortfalls, “We’ll need to engage in a conversation with the city and county to understand how we share in the subsidy.”

With empty spaces here and there to fill in the Arena District, plans are being offered for such things as expanding the Basketball Center or adding a restaurant, but nothing has been finalized.