DivvyUp is Rising to Be More Than a Sock Company

They've come up with their own version of the 'buy one, give one' business model.

A trip to a Tallahassee homeless shelter has spawned tens of thousands of socks and a business with sole.

DivvyUp, the product of an effort to do good, hardly takes the competition in stride. In less than five years, it has gone national.

“Our vision is to be the No. 1 custom-sock company,” said Jason McIntosh, a company co-founder along with Mitch Nelson and Spencer Bluni.

DivvyUp calls itself an on-demand custom-sock company. You choose an online template, upload a photo of a loved one or a pet — and, boom, you have bounce in your step because you have caused a new, specialized pair to be sent to a local homeless shelter.

That’s the result of the company’s giving component.

Customers usually receive their orders within about 10 days, the company said. In early August, prices started at $24 a pair.

“We have a focus on custom pet socks,” McIntosh said. “Put your dog on socks, put your cat on socks. Our goal is to expand to anything you can imagine.”

“These socks with my toddler’s face were a huge hit for Father’s Day,” Julie Shackleton of San Francisco wrote on the company’s Facebook page. “They bring a laugh every time my husband wears them.”

DivvyUp got its start in early 2014 in Florida State University’s entrepreneurship progam. The company recalled it this way:

A class project required students to get into groups and start a small business. A group that included McIntosh and Nelson focused on starting a venture that would help the community. 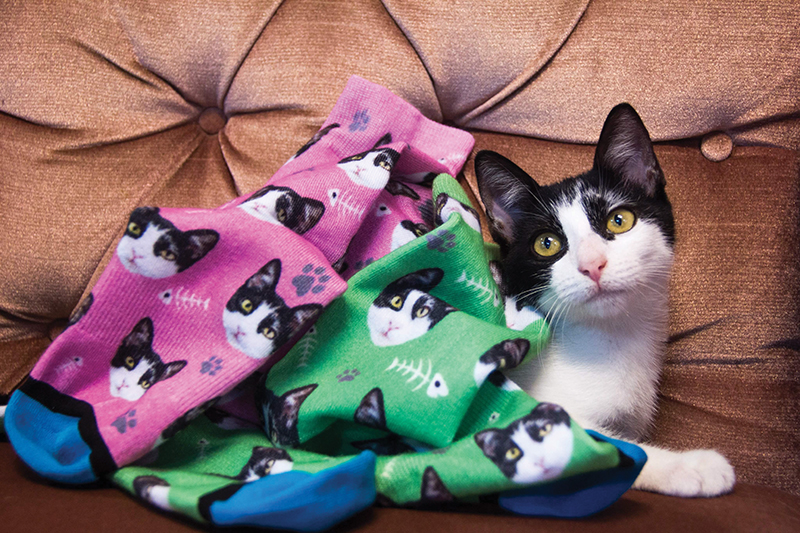 Socially conscious DivvyUp has contributed socks to homeless shelters in 26 states. Customers dictate designs by choosing a template and uploading a photo of a pet or loved one. Photo courtesy of the Custom Sock Company

The group struggled with its first idea and eventually found its way to a homeless shelter, since demolished, on West Tennessee Street.

“We simply asked the receptionist, ‘What can we do to help?’ ” McIntosh said. The receptionist’s response: Homeless clients need clean socks, which people tend not to donate.

The students got a $400 loan from their professor and bought what they called “fun socks” to sell. For every pair they sold, a pair would go to the mission.

Within about six weeks, they gave 160 pairs of socks to the shelter.

“They’ve always been very kind and generous,” said Susan Fiorito, director of Florida State’s Jim Moran School of Entrepreneurship. “I hope they have a world of success.”

“After pivoting their business model several times, DivvyUp hit an untapped market in 2017 and grew exponentially, selling over 200,000 pairs of socks worldwide and gifting another 200,000,” Montoya said.

“DivvyUp clearly demonstrates the success that is possible by playing the long game. Now, it hopes that its model will be replicated by others who will benefit from their entrepreneurial experience in creating more success stories.”

The company says it worked with leaders in the homeless community to create a sock that includes, among other features, dark materials to hide wear and antimicrobial treatment to prevent infection. ‘DivvyUp has donated socks to shelters in 23 states, including 11 in Florida.

“We really enjoy objects like this that are super practical,” she said.

DivvyUp now has its own 17,000-sqare-foot production facility, which employed 26 people this past summer. That number may triple this holiday season, McIntosh said.

DivvyUp emphasized its commitment to giving away a pair of socks for every pair it sells but said it has shifted its marketing approach.