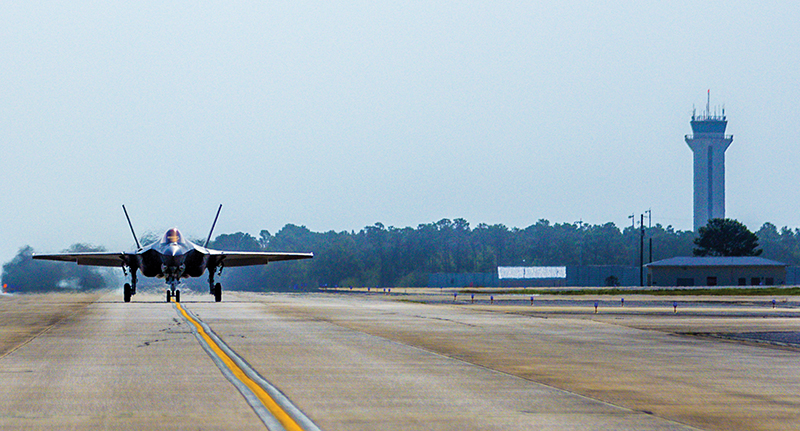 An F-35C Lightning II taxis down the flight line from the Strike Fighter Squadron 101 at Eglin Air Force Base. The F-35C is a multi-role fighter aircraft, designed to provide superior airborne power projection from the sea. The Navy’s joint strike fighter features structural modifications, necessitated by carriers.

In March of this year, several dozen Florida fishing captains had a taste of adventure when they were contracted by the U.S. Air Force to play the role of Iranian missile boats in attack exercises. A-10 Warthogs swooped down from above Choctawhatchee Bay in mock strafing runs, lining up to attack the fishing vessels, and Canadian F-18 fighter jets and attack helicopters also joined in the fray.

While this was an unusual instance of civilians being paid to contribute to military activities, most people in Florida derive either direct or indirect economic benefit from the presence of the military.

Statewide, Florida’s 20 military installations account for nearly 775,000 jobs, and direct defense expenditures in the state total $34.7 billion, according to the Florida Defense Handbook, released in September 2015. In Northwest Florida, the economic impact of the military is felt strongly in Okaloosa County. There, the military presence has resulted both directly and indirectly in the creation of about 72,000 jobs, according to Nathan Sparks of the Okaloosa Economic Development Council.

These defense dollars pour into the county through Eglin Air Force Base and the complex of defense contractors that surround it, as well as nearby military installations and a community of military retirees who call the area home.

Thousands of Airmen, Soldiers and Sailors

The military has a huge presence in the Florida Panhandle, and nowhere more so than in Okaloosa County.

Eglin Air Force Base is the largest military installation in the United States and is home to about 10,000 combined service members and civilian employees, as well as nearly 3,000 contractors. The base covers 720 square miles, according to Jasmine Porterfield, public affairs specialist with the 96th Test Wing at Eglin.

Next door to Eglin is Hurlburt Field, where the 1st Special Operations Wing is based. According to the Department of Defense, there are another 8,000 service members and 2,000 civilian employees at Hurlburt.

In addition to the two major Air Force installations, Okaloosa serves as a base for the 870th Engineering Company of the Florida National Guard and U.S. Coast Guard Station Destin.

Spreading out from either side of Okaloosa, there are Navy installations in Escambia County just to the west and Air Force and Navy bases in Bay County to the east. 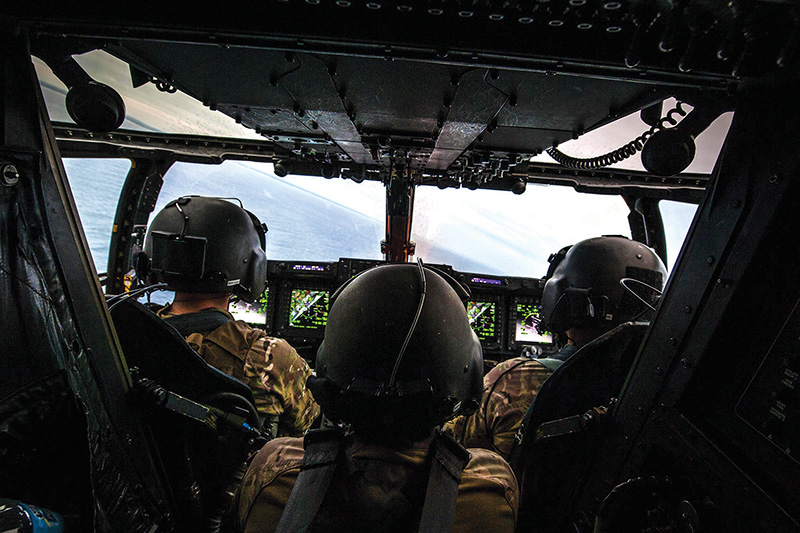 Thanks to the close proximity to Eglin Air Force base, Hurlburt Field and other military installations, seven of the largest defense contractors have a presence in Okaloosa County, including Boeing, Lockheed Martin and Northrup Grumman, Sparks said. Military defense contractors working for Eglin Air Force Base account for 3,000 jobs, according to Porterfield. Public Affairs Officer Jaclyn Pinkowski at Hurlburt Field said Hurlburt employs close to 2,300 contractors.

In addition, members of the armed forces who separate or retire from the military provide a skilled workforce for area employers to draw from.

“The men and women in uniform are known for having a great commitment to the mission, whatever that mission may be, (and) a great work ethic, and many of them have made the decision to remain here in their post-military years because of their affinity for the quality of life that they’ve found on the Emerald Coast,” Sparks said.

He mentioned several successful businesses in Okaloosa County that have been started over the past two or three years by former military employees living in the area. On-Point Defense Technologies, for example, was started three-and-a-half years ago by four men who all completed some military service prior to starting their company. On-Point supplies TOW missile launchers and other defense-related products both directly to the Department of Defense and indirectly by selling to other, larger defense contractors.

Fred Schor is one of the founders of On-Point. He had a career in the Air Force as an electronic warfare officer and later worked for Textron Defense Technologies testing smart weapons before joining forces with Randall Hull, John Diesel and Peter Driver, the company’s current president, to start On-Point.

“Okaloosa County is a major defense employer,” Schor said. “Eglin Air Force Base employs somewhere around 13,000 people. So it’s a good location for a defense business.”

Neighboring Walton County experiences some of the benefits of being close to the military installations, but the economic impact there is significantly less than in Okaloosa because Eglin and Hurlburt are headquartered in Okaloosa. Still, military-related spending accounts for about nine percent of the local economy in Walton County, according to a 2011 study by the Haas Center at the University of West Florida.

“We have a number of people that live in Walton County and that report daily to the bases over there for jobs, and from time to time we get spinoff companies that form in order to provide services for new endeavors that are coming into Okaloosa and Walton County from the military,” noted Bill Imfield, interim executive director of the Walton County Economic Development Council.

Although government sequestration and budget cuts have lessened Department of Defense spending in recent years, Sparks said the mood is shifting with the change in presidential administrations.

“The last few years have been tough,” he said. “But I can tell you that right now, there is a level of optimism that I would call cautious optimism, mind you, but a level of optimism nonetheless. There seems to be a growing priority on giving attention to our nation’s defense and making certain that the ‘war fighter,’ as it’s called, has the resources to complete the mission effectively.”

It looks likely that the military’s needs for technology, goods and services will be given “top billing and top priority” over the next several years, Sparks said, which would mean an economic outlook for Okaloosa County that is as bright as the Florida sunshine.